Parental surrogacy is often less complicated and costly than in the United States but also raises ethical questions.
Play Story
Subscribe to Stories

JEFFREY BROWN: And finally tonight: the second of two reports on Indian surrogate mothers who are paid to bear children for infertile Western couples. The money lifts the women out of poverty, but the transactions also raise many ethical issues.

Special correspondent Fred de Sam Lazaro traveled to western India to explore those issues. The surrogate in this story asked that we not reveal her name.

FRED DE SAM LAZARO: Minutes after delivering a slightly premature infant by C-section, Dr. Nayna Patel, was back in the office and on the phone to the parents.

FRED DE SAM LAZARO: They were en route from their home in England and didn’t reach the small town of Anand, India, in time to watch a surrogate mother give birth to their child.

FRED DE SAM LAZARO: Dr. Patel has delivered some 400 surrogate babies since 2004. Her clinic implants embryos in surrogates she recruits from the area and pays around $7,000 for a pregnancy carried to term. Biological parents come from across India and around the world.

Kirshner Ross-Vaden came here from Colorado to pick up her baby girl named Serenity. She was born four weeks premature, but after a week in neonatal intensive care, she was ready to be discharged.

MAN: And here’s all reports.

FRED DE SAM LAZARO: Serenity’s 46-year-old mother traveled here with her 9-year-old son. She had tried unsuccessfully in recent years to conceive. Surrogacy was her last hope and India her first choice.

KIRSHNER ROSS-VADEN: You can sign 100 documents. It doesn’t matter. If that surrogate changes her mind, she can sue you for that child. And, oftentimes, she will win. And coming here to India, these women, they don’t want my child. It’s very cut and dry. They do not want my child. They want my money. And that is just fine with me.

FRED DE SAM LAZARO: It’s not fine with everyone.

DR. ARTHUR CAPLAN, Director, University of Pennsylvania Center for Bioethics: And the contracts are usually written, to be blunt, to protect the wealthy people who are commissioning the baby, so that if the woman suffers an injury, if the woman has a health problem due to childbirth, if there’s a long-term chronic condition, then what?

FRED DE SAM LAZARO: University of Pennsylvania ethicist Arthur Caplan worries the relationship is inherently lopsided between poor, minimally literate women and well-heeled couples who commission them to have their children.

For example, surrogates in India are routinely implanted with up to five embryos to improve the chances of a pregnancy. In the U.S., clinics usually implant no more than two, sometimes three.

DR. ARTHUR CAPLAN: Why would you use three, four, five embryos in India? Because you don’t want the couple to have to come back. It’s expensive, even for a rich person. So you’re trying to maximize the chance of pregnancy, even if it might compromise the interests of the babies.

FRED DE SAM LAZARO: Dr. Patel concedes that implanting five embryos heightens the risk for infants and mother and says she is now lowering that number to three or four. But she says the downside of fewer embryos is a lower pregnancy success rate.

When multiple embryos develop into viable pregnancies, Dr. Patel’s policy is to reduce them by selective abortion. Aside from possible religious concerns, this process could present medical risk to the surviving fetuses.

DR. NAYNA PATEL: Parents, yes, there are some who say right from the beginning that, Doctor, put less embryos because we are not for reduction and we don’t want this to happen.

So, in those cases, we definitely never transfer more than two. But there are certain parents who don’t have any objection to this. And surrogates, we don’t allow them to carry more than two.

FRED DE SAM LAZARO: Dr. Patel insists that her facility protects the interests of surrogates as much as the clients of her commercial surrogacy program and the infants she delivers.

DR. NAYNA PATEL: We do a lot of psychological counseling to the surrogate and the family before we recruit them. We explain to them the procedure of IVF, what all they will have to undergo.

If she has had any complications during her previous pregnancy, we will ask her not to become a surrogate, because the same can repeat this time, to make it very sure and safe for her.

FRED DE SAM LAZARO: The moment their pregnancies are confirmed, surrogates are required to move into this home run by Dr. Patel. They’re offered skills training in things like tailoring, but mostly it’s a quiet, sedentary life.

The women who spend nine months in this surrogate hostel have all experienced childbirth with their own biological children. It’s a prerequisite for becoming a surrogate. What very few of them have experienced with those previous pregnancies is any kind of prenatal care. And that’s in sharp contrast to the pampering they get here, with meals provided and medical attention, should they need it, round the clock.

Dr. Patel acknowledges the irony, but says its part of a thorough surveillance to ensure smooth pregnancies for both surrogate and parents’ sakes.

DR. NAYNA PATEL: We have a fetal medicine specialist who checks all the surrogates every three weeks. We have been able to detect minor congenital malformations, which we inform the couple that this can be treated post-delivery without any impact on the baby.

We have had patients whose surrogate had babies with Down syndrome, which was detected, which was confirmed with amniocentesis, and we aborted those babies after the consent of the couple.

FRED DE SAM LAZARO: Well in advance, she says parents are consulted on decisions like pregnancy termination. Similarly, parents must accept their babies, once born, whether healthy or not.

Surrogates we spoke to talked about building a new home and using their money for their children’s education. The money, $7,000 to $8,000, would otherwise take them decades to earn. Most say they were happy to have helped infertile couples.

The woman who bore baby Serenity, whom we met earlier, admitted to some sorrow at her separation.

SURROGATE MOTHER (through translator): You can’t help it when you have carried a baby for nine months. I would like to see how she does in the future.

KIRSHNER ROSS-VADEN: I do have her address, so I can get a hold of her. And I hopefully will be able to maintain some kind of a relationship with her.

FRED DE SAM LAZARO: We caught up with Serenity’s mother in Mumbai, an hour’s flight from Dr. Patel’s clinic. She and son Brandon were holed up in a hotel, awaiting DNA test results and myriad documents to satisfy the Indian and U.S. governments that the infant could leave the country.

FRED DE SAM LAZARO: But will every surrogacy story end happily? Right now, India has only voluntary guidelines, and it’s not clear whether future laws will be adequately enforced. And standards vary widely.

For example, Dr. Patel says she only serves infertile patients. But some clinics offer surrogates to healthy parents who, for career or convenience, want to avoid pregnancy.

Ethicist Caplan worries about where all of this is leading.

DR. ARTHUR CAPLAN: We may get into situations where people start to say, as genetic knowledge improves, you know, I’m not infertile, but I would like to make a baby with traits and properties that I want to avoid or that I desire.

And that day is coming. And I think it’s important to keep in mind, as we watch the evolution of surrogacy as an international activity, what is really something that a tiny handful of people use who suffer from infertility tomorrow can be what more people are interested in because they have a more eugenic or perfectionist interest in making their children.

FRED DE SAM LAZARO: For her part, Dr. Patel plans a major expansion of her one-stop surrogacy shop, a leader in what’s now a half-billion-dollar industry in India. She makes no apologies for making a lucrative living and insists that, for her, for surrogates, for new parents, it’s win-win-win.

JEFFREY BROWN: A version of Fred’s story can be seen on the PBS program “Religion & Ethics Newsweekly.” And his reporting is a partnership with the Under-Told Stories Project at Saint Mary’s University in Minnesota.

The money from surrogacy lifts the women out of poverty, but the transactions also raise many ethical issues. 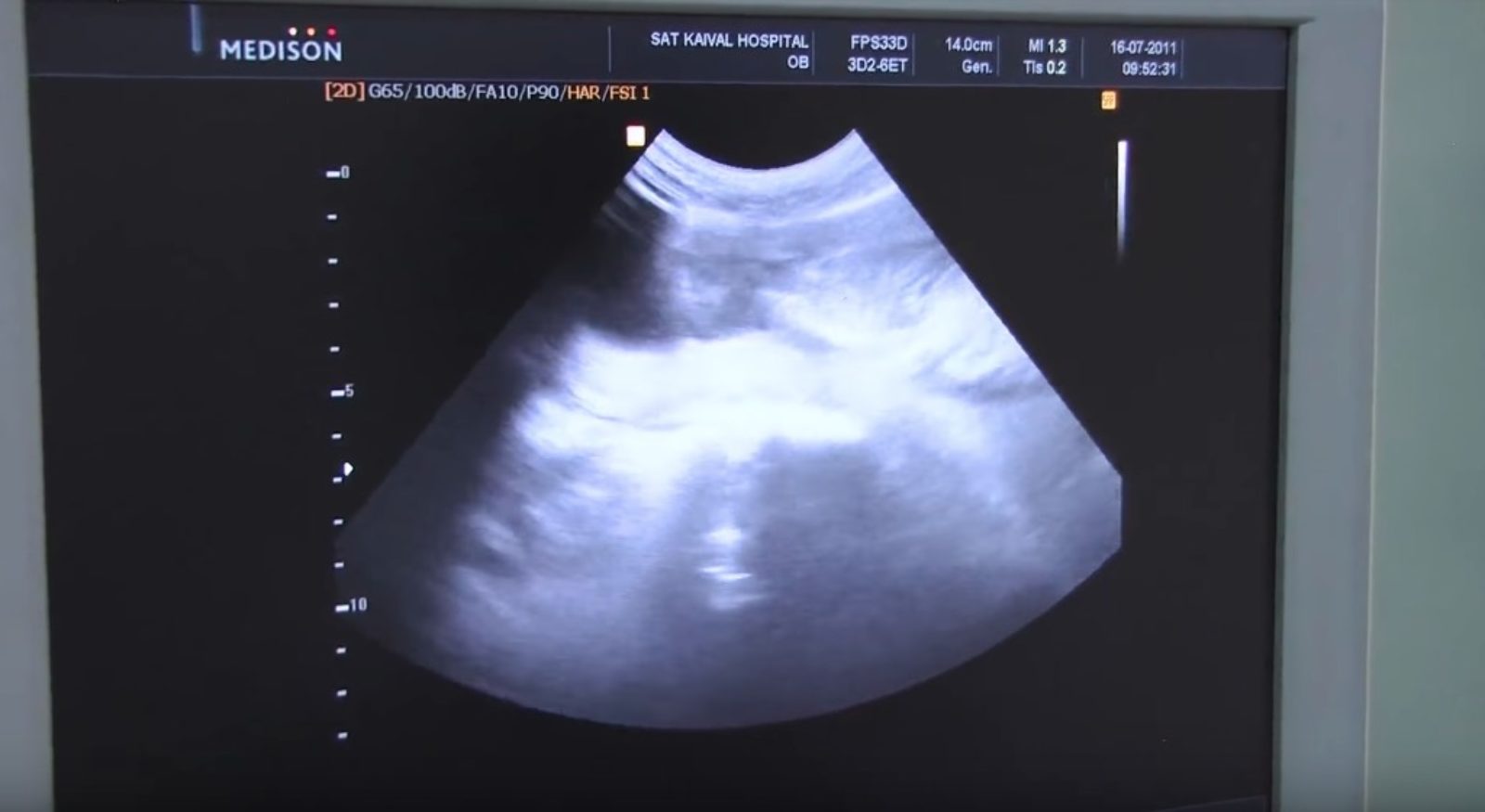 a half-billion-dollar industry in India

“We do a lot of psychological counseling to the surrogate and the family before we recruit them. We explain to them the procedure of IVF, what all they will have to undergo.”

worries the relationship is inherently lopsided between poor, minimally literate women and well-heeled couples who commission them to have their children. “The contracts are usually written, to be blunt, to protect the wealthy people who are commissioning the baby, so that if the woman suffers an injury, if the woman has a health problem due to childbirth, if there’s a long-term chronic condition, then what?”

Dr. Patel insists that her facility protects the interests of surrogates as much as the clients of her commercial surrogacy program and the infants she delivers. Surrogates we spoke to talked about building a new home and using their money for their children’s education. The money, $7,000 to $8,000, would otherwise take them decades to earn.