Amna Nawaz:President Trump’s visit this year to Mount Rushmore drew new attention to a decades-long battle between Native Americans and the federal government over millions of acres in South Dakota.Special correspondent Fred de Sam Lazaro looks at the campaign to reclaim that land.His report is in partnership with the Under-Told Stories Project at University of St. Thomas in Minnesota and part of his series Agents For Change.

Fred de Sam Lazaro:It is an icon of the American West, and here on the vast Pine Ridge Indian Reservation, buffalo rancher Bamm Brewer says it is hard to overstate the animal’s importance.

Bamm Brewer:The buffalo was significant to our ancestors because it provided everything. The buffalo was like the Walmart, food, clothing, medicine, and also a sacred being, a symbol of power for our people.

Fred de Sam Lazaro:Also a symbol of loss. Buffalo, or bison, were hunted to near extinction after European settlers arrived, and the animal’s revival in small herds like Brewer’s is a metaphor for a campaign to reclaim a Native culture and land taken in violation of treaties the U.S. government signed with Sioux tribes in the 1800s.

Bamm Brewer:I lived here all my life, and it’s always been the same poverty. I don’t want that for my grandkids. I want us to come away from that. And I believe that the Black Hills is the answer.

Nick Tilsen:It’s not just about physical land. It’s about the rebuilding of our societies and our communities.

Fred de Sam Lazaro:Activist Nick Tilsen says that rebuilding begins with the land, millions of acres of the Black Hills. The U.S. Supreme Court upheld the tribal claim 40 years ago, but only ordered restitution, about $1.5 billion in today’s dollars.Tribal leaders rejected the money. They wanted the land, some of it in private hands, but much of it now owned by the federal government. Tilsen about 150 others loudly renewed that demand when the president held a rally at Mount Rushmore last July.Demonstrators blocked the road, drawing counterprotesters headed to the Trump rally and exacerbating long simmering tensions between tribal and South Dakota political leaders. Twenty people were arrested, but only Tilsen was charged, facing an array of misdemeanor and felonies, including simple assault and robbery for taking a shield from a law enforcement officer.

Nick Tilsen:These are all just a bunch of lies.

Nick Tilsen:The work that I have committed my life to, of building indigenous power, it’s an honor to be in this moment.

Fred de Sam Lazaro:Prosecutors did not respond to our request for comment on the charges against Tilsen, who, at 38, is regarded nationally as an emerging indigenous leader.His nonprofit, NDN, raises millions in philanthropic funds and makes grants to indigenous groups and causes, from fighting mining and pipeline interests to starting businesses on Indian lands, and taking back the lands they view as their own.

Nick Tilsen:Because we’re not trying to burn people out of their houses or tell them remove people or perpetuate and recycle the same injustices that were done to us. That’s not what we’re talking about.

Fred de Sam Lazaro:What he and others want is indigenous-led development to reduce the near total dependence on appropriations from Congress, managed by various federal agencies.Scott Weston is a former tribal president.

Scott Weston:That’s that government process that’s holding us down, that doesn’t let us live like the rest of the world. We don’t get to think for ourselves. We are — it is basically dictated to us what needs to happen.

Fred de Sam Lazaro:A common complaint here is that wealth has always been taken from Indian lands, and what’s left behind are abysmal living conditions.Unemployment on Pine Ridge is above 80 percent, and life expectancy just 66, 12 years below the U.S. average.Nonprofit advocacy groups that work on the Pine Ridge Reservation say up to a third of all households here are not hooked up for basic electricity and sewer services.One of Tilsen’s efforts to address the crisis is a pilot development of energy-efficient homes called Thunder Valley, which is now run by a separate cooperative. But with just 30 homes and 48 apartments, Thunder Valley meets a tiny fraction of the vast need. It also took years to navigate federal bureaucracies for basic services.

Nick Tilsen:It was super daunting, like, to be a bunch of ragtag guys from the rez and then sit across from the U.S. Department of Agriculture, who hands you a booklet like this thick, and says, this is what you have to learn in order to get access to water and sewer.

Tawney Brunsch:The Pine Ridge Reservation, which is 3,500-square-miles big, is without a single financial institution.

Fred de Sam Lazaro:Tawney Brunsch heads a community-based lender called Lakota Funds, which is trying to create wealth so people can afford homes. It is focused on lending to encourage more ranching by tribal members. Vast swathes of Pine Ridge today are leased to white ranchers.One Native customer is former tribal president Weston. He says his sons and grandchildren now have a chance to stay and thrive in the business and on the reservation.

Scott Weston:You see people coming from other countries into this country. And you see these big opportunities that they have, whereas we’re subjected to whatever the government gives us. And that’s where Lakota Fund is starting to come to play.

Fred de Sam Lazaro:He says it’s a tiny step toward self-determination for indigenous people, a cause that Nick Tilsen says is particularly timely these days.

Nick Tilsen:As we’re having this racial reckoning, this country will never achieve racial justice unless it makes its itself right with indigenous people.

Fred de Sam Lazaro:Tilsen has his own reckoning. A judge ruled there was probable cause for a trial on charges related to the July demonstration. The trial will likely be held next spring.A petition drive demanding that the charges be dropped has gathered 18,000 signatures so far.For the “PBS NewsHour,” this is Fred de Sam Lazaro on the Pine Ridge Reservation.

40 years ago, the U.S. Supreme Court ruled that the millions of acres in the Black Hills of South Dakota were taken in violation of treaties the U.S. government signed with Sioux tribes in the 1800s. Nick Tilsen and his organization, NDN Collective, are leading an effort to get that land returned to Native communities. 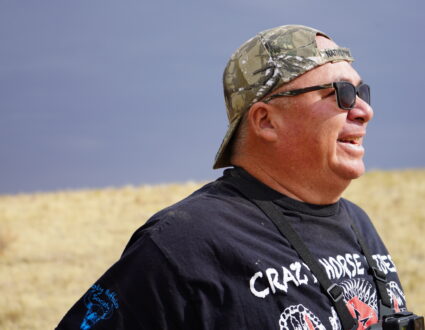 PODCAST: Bringing Back the Buffalo 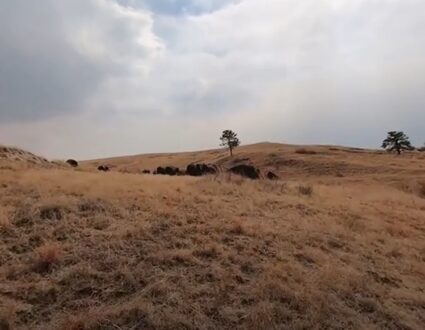 “It’s not just about physical land… it’s about the rebuilding of our societies and our communities.”
Nick Tilsen

“If we talk about racial justice… This country will never achieve racial justice, unless it makes itself right with indigenous people.”