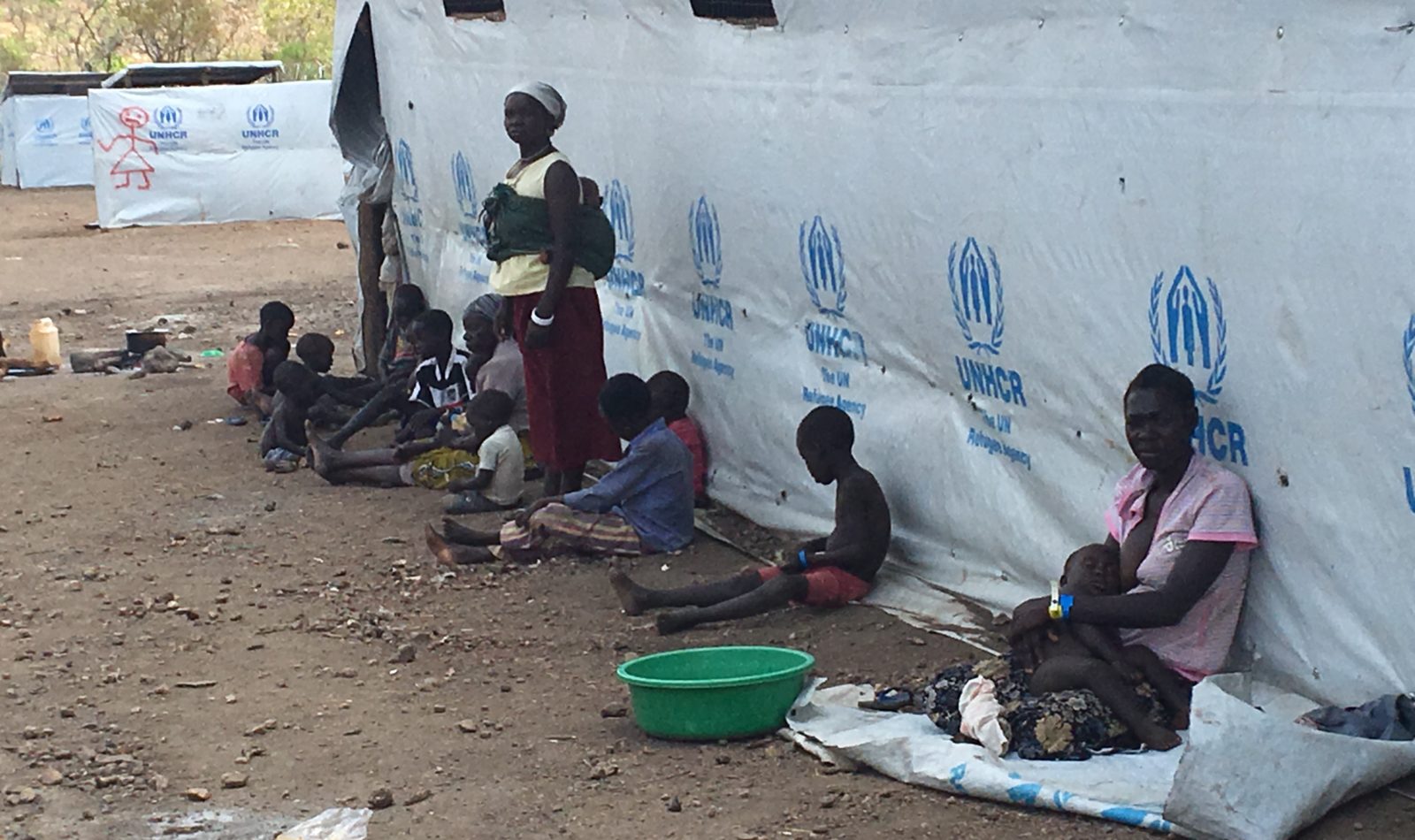 JUDY WOODRUFF: Next: In a world struggling to accommodate a record number of refugees, one country has been notably welcoming.

Special correspondent Fred de Sam Lazaro has a report from Uganda. It’s part of his Agents for Change series.

FRED DE SAM LAZARO: Nakivale in Southern Uganda looks like any other dusty rural African town. What’s remarkable is that almost none of its 113,000 residents are Ugandan.

All of these schoolchildren and their parents are refugees.

All told, 13 nations are represented in this crowded school, their families fleeing conflicts across a wide swathe of East Africa and finding haven in what must rank as one of the world’s most hospitable countries to refugees.

In Uganda, refugees are placed in settlements and not camps, and the government says there’s an important difference. Camps tend to confine people, whereas, in Uganda, when refugees arrive, they are issued legal I.D.s that entitle them to move freely anywhere in the country, to find a job, start a business, put their children in school.

Refugees in rural areas are given a small plot of land to farm. Others migrate to the urban areas. Somalis are among the earlier arrivals in recent years. Their enclaves in the capital, Kampala, are well-established with small businesses and mosques, a predominantly Muslim community in a mostly Christian nation.

MOHAMMED ABDI, Somali Immigrant (through translator): We have very many Ugandan customers and we are friends. I am one of the Somali elders in the community. We interact with the elders of the Ugandan community, whether leaders in this distract or region. And we are friends, and they welcome us. We’re very happy. We’re like one people.

ALEXANDER BETTS, Oxford University: We showed in the capital city of Uganda, Kampala, 20 percent of refugees own businesses that employ someone else. And of those they employ, 40 percent are citizens of the host country. So refugees can contribute to the host societies that they’re part of.

ALEXANDER BETTS: It’s all too easy to have a race to the bottom in terms of political standards, where provincial and municipal politicians or national politicians say, these people are a burden. We have to keep them out.

FRED DE SAM LAZARO: And while many politicians, especially in Western democracies, must tread carefully on this issue, Betts says it’s not a problem in Uganda, where one man rules virtually unchallenged.

ALEXANDER BETTS: President Museveni has been able to adopt refugee policies that are a little different, in part because there are lower standards of accountability to the public.

Now, not having democratic standards is definitely not something to celebrate, but it highlights the difficulties for democracies to open up their economies to non-citizens. It’s a hard thing for politicians.

FRED DE SAM LAZARO: Recent history might also account for Uganda’s hospitality to refugees. President Yoweri Museveni himself lived in exile for years during and after the bloody dictatorship of Idi Amin. Museveni’s rebels took power 30 years ago.

REV. ZAC NIRINGIYE, Bishop, Anglican Church of Uganda: There’s been a history of violence in this region.

FRED DE SAM LAZARO: Zac Niringiye is a bishop in the Anglican Church of Uganda.

REV. ZAC NIRINGIYE: South Sudan, Rwanda, Burundi, even Congo and even Uganda. I think that that has created a sense of being hospitable, because you never know. It may be your turn next.

FRED DE SAM LAZARO: Despite praise for its hospitality, life in Uganda is far from perfect for refugees. Their number has doubled in the past five years to more than half-a-million, most recently from separate conflicts in Burundi and South Sudan.

Many refugees, like Abebesh Gebreslassie, remain haunted by the ordeal that brought them here.

ABEBESH GEBRESLASSIE, Eritrean Immigrant (through translator): My husband was killed, my son was killed, and also my daughter.

FRED DE SAM LAZARO: A son and daughter died in their escape from Eritrea, part of the exodus of hundreds of thousands from a country notorious for human rights abuses.

Her son-in-law made it to Libya, but died in the Mediterranean.

Gebreslassie survived the journey of thousands of miles on foot and on trucks with her then 6-year-old twin son and daughter. But she made a wrenching decision to leave two older teenaged children behind.

ABEBESH GEBRESLASSIE (through translator): I feared if we all died, like my son who was shot. I left them so that our family can survive, can be represented.

FRED DE SAM LAZARO: They are still there now?

ABEBESH GEBRESLASSIE (through translator): I don’t care if I die here, but I want a better future for my children, and that’s not possible without a good education.

FRED DE SAM LAZARO: That’s not likely in the crowded school her children attend, with 120 students in each classroom, and perhaps, because of that, teachers who aren’t very sympathetic. There are severe consequences for being late, for instance.

FRED DE SAM LAZARO: So, if you’re late, you have wash the toilets.

FRED DE SAM LAZARO: “They don’t understand,” she said, “that I’m late because I’ve gone to fetch water and helped my mother with the chores.”

In the end, Ugandan and international officials say it boils down to resources, or a lack of them. Uganda may be hospitable, but it has a gross domestic product of just $600 per year per person.

Nakivale’s school is funded by the U.N.’s Refugee Agency. It gives Uganda some $200 million annually in refugee aid, a fraction of what’s needed, but not likely to increase amid the demands on donor governments for refugees out of Syria, Iraq, Ukraine and elsewhere.

Charles Yaxley is the U.N. agency’s spokesman in Uganda.

CHARLES YAXLEY, United Nations Refugee Agency, Uganda: Around the world, humanitarian financing is arguably at breaking point. Currently, humanitarian appeals for South Sudanese and Burundian refugees in Uganda, both of those appeals are severely underfunded.

We’ve received less than a quarter of the money we need for 2016, and that leaves real gaps in our humanitarian response. It means we’re not able to provide the education support for children such as better schools, more schools, more teachers.

FRED DE SAM LAZARO: That does not bode well for the future of Abebesh Gebreslassie’s twins, who shared their dreams in halting, shy English.

What would you like to do when you grow up?

STUDENT: When I grow up, I want to be a doctor and to help my mother.

FRED DE SAM LAZARO: How about you, David? What would you like to do when you grow up?

STUDENT: I wish to be a pilot.

FRED DE SAM LAZARO: You want to be a pilot?

FRED DE SAM LAZARO: Possible, but like their chance of a good education here, with lottery-like odds. America admitted 70,000 refugees last year. The U.N. says there are 65 million displaced people in the world today.

For the “PBS NewsHour,” this is Fred de Sam Lazaro in Nakivale, Uganda.

JUDY WOODRUFF: Fred’s reporting is a partnership with the Under-Told Stories Project at the University of St. Thomas in Minnesota.

In a world struggling with anti-immigrant sentiment, Uganda provides a rare hospitable welcome for those seeking asylum. Refugees live in settlements where they are able to run small businesses, attend mosques and children attend school. The country’s support system is possible mainly because of its unilateral political structure. Special correspondent Fred de Sam Lazaro reports from Uganda. 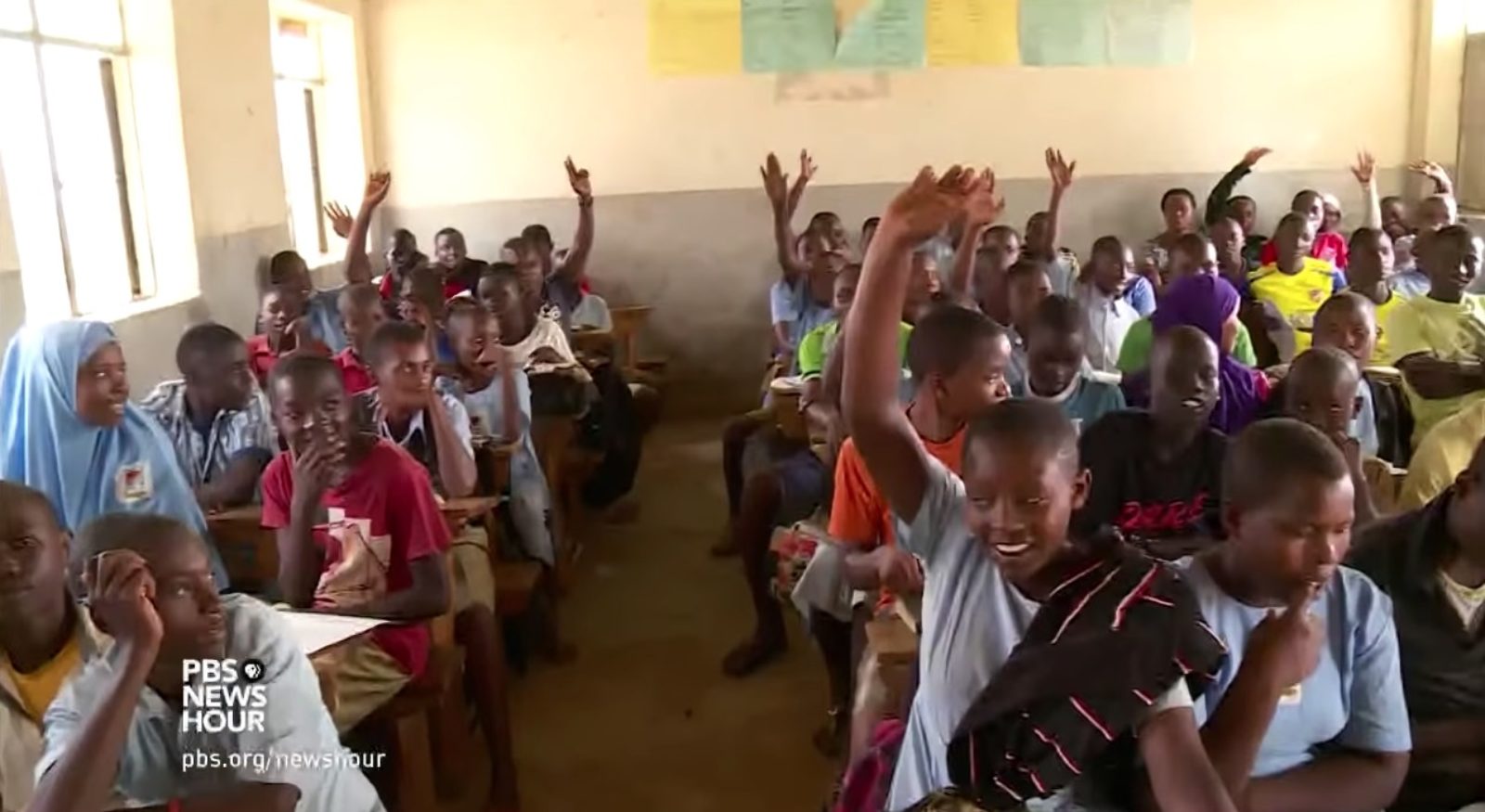 are represented in this refugee school, their families fleeing conflicts across a wide swathe of East Africa.

No Refugee Camps
In Uganda, refugees are placed in settlements and not camps, and the government says there’s an important difference. Camps tend to confine people, whereas, in Uganda, when refugees arrive, they are issued legal I.D.s that entitle them to move freely anywhere in the country, to find a job, start a business, put their children in school.
20%
of refugees own businesses that employ others in Kampala
40%
of those employees are citizens of the host country

Little to go around

In the end, Ugandan and international officials say it boils down to resources, or a lack of them. The number of refugees entering Uganda has doubled in the past five years to more than half-a-million, and Uganda itself isn’t a wealthy country with a gross domestic product of just $600 per year per person. 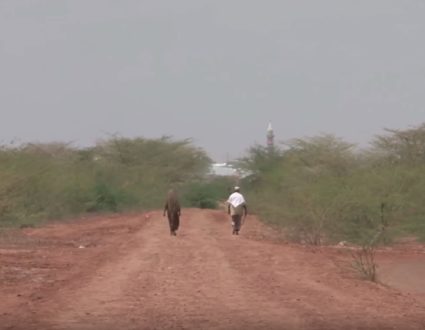 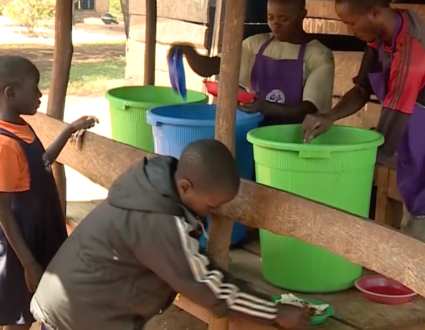 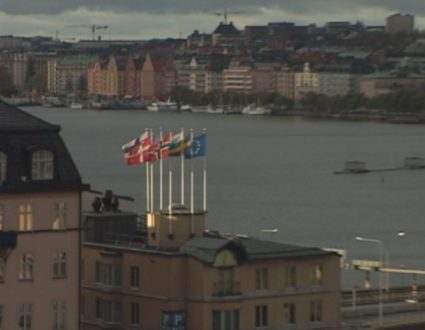 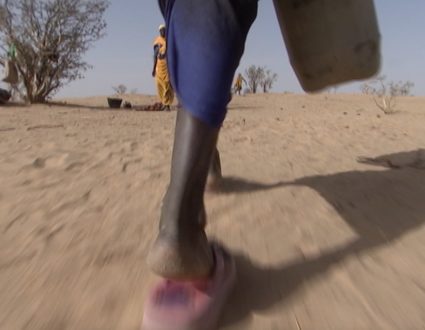