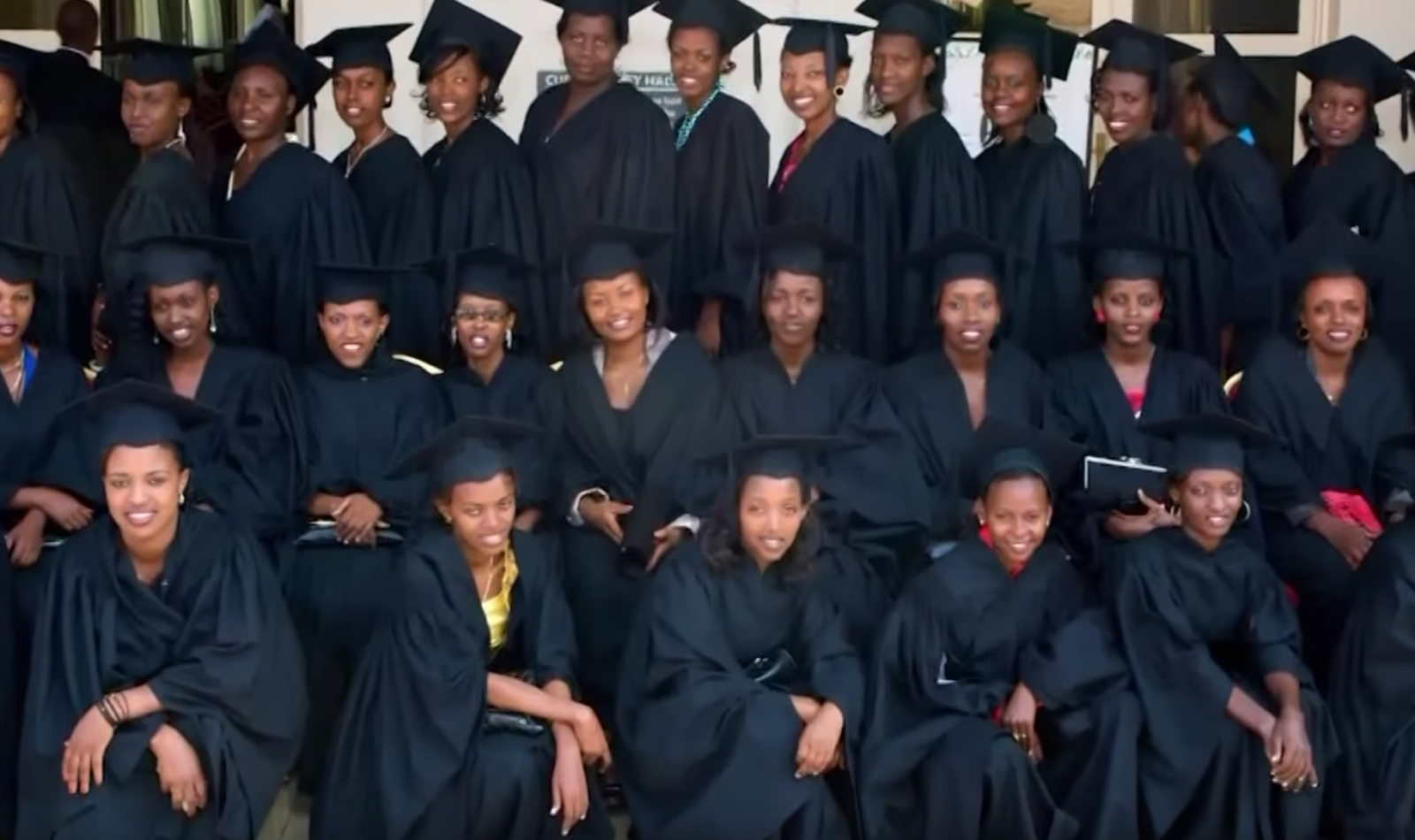 Now to Rwanda, where a college is trying to break a cycle of violence and discrimination by empowering women through education.

During the workweek, 30-year old Nadia Kubwimana is a catering manager at the Marriott Hotel, one of the newer entries into a glitzy skyline of Rwanda’s capital, Kigali.

On weekends, she steps into a very different world, helping mentor 250 women in her hometown just outside Kigali. Together, they have started 42 different small businesses, ranging from vegetable markets, to handmade baskets, to a cooperative that sells coal for cooking stoves.

These women meet in a tiny storage shed located in a less trafficked area on the outskirts of the city.
Nadia Kubwimana:

They wish to grow their business. The problem they have, as you see where we are, it’s far from the road, the main road.
Fred De Sam Lazaro:

Kubwimana is a recent graduate of the Akilah Institute, a two-year college which trains women to be leaders in the world of business.
Nadia Kubwimana:

From Akilah, I learn about leadership. I learn to be confident. I learn how I can manage a small business.
Fred De Sam Lazaro:

The school is part of an effort by Rwanda to leave behind its image of a violent country wracked by genocide. Rwanda’s president, Paul Kagame, has been criticized for human rights violations and for stifling dissent. He recently won reelection by a lopsided 99 percent after changing the constitution to extend his reign.

Still, the country has made considerable strides in reducing poverty. In the 23 years since the genocide, Rwanda has been a world leader in bringing down infant mortality, maternal mortality. Life expectancy has climbed from 48 to 58.

But the statistic that makes this country unique in the world reflects the role of women in all of this. Half of this country’s Supreme Court justices are female, and so are two-thirds of its members of parliament.

In spite of the impressive statistics, many women have not participated in those gains. The Akilah Institute, the first all-women’s college in the country, wants to change that. It was founded seven years ago by Elizabeth Dearborn Hughes, a Vanderbilt University graduate who had come to volunteer in Rwanda in 2008 and found that only 7 percent of women entered college and nearly 85 percent of women made less than $2 a day, if they found work at all.

At Akilah, the emphasis is on preparing women for well-paying jobs and financial independence.

The Akilah founders went to the private sector and asked, where do you see the country’s fastest growing sectors of the economy? Where are the skills gaps? What do you need? And really make sure that, one, the choice of the programs, as well the curriculum itself really mirrors the expectations of the private sector.
Woman:

When you do something wrong to a customer, you’re ruining the company’s image.
Fred De Sam Lazaro:

The school focuses on three areas of study- entrepreneurship, the hospitality industry and information technology.

It recruits half of its students from rural areas, the other half from Kigali, and offers generous financial aid to attract and encourage students who otherwise would have no chance of receiving a college education.

But before teaching any specific skills for a career path, the school works to develop the women’s self-confidence, says instructor Jackie Semakula.
Jackie Semakula:

First, we build in them the spirit of believing in themselves, taking them through a growth mind-set class, where their ability to excel and grow is not fixed, so they start believing, oh, I can do this.

For many of the young students, Akilah is the first place they have heard about gender equality.

Sandrine Sangwa now studies I.T., but back in high school, she says, girls were not encouraged to develop computer skills.
Sandrine Sangwa:

We were supposed to sit like three children on one computer, and, at that time, they allowed a boy to stand in front of the keyboard, so like he can be the one who is doing the keyboard. They don’t see the potential that we have as girls.
Fred De Sam Lazaro:

Allen Ingabire, who is studying hospitality management, realizes that many young women don’t see their potential either.
Allen Ingabire:

Some girls will not come to Akilah. They still feel they can’t do that. Here at Akilah, we have been given this opportunity to get exposed to leaders, to learn leadership.

So, it is our time to go and tell our young sisters, tell our friends that, you can do this, even though your friend is telling you that you can’t.
Aline Kabanda:

Jacky Mutama is a good example of the shift that is starting to taking place in Rwanda. In 2010, she was a 35-year-old housewife with two small children, but she was restless.
Jacky Mutama:

I wasn’t interested to stay home as a housewife.
Fred De Sam Lazaro:

She became part of the first class of students at Akilah, graduating in 2012, and then pursued a dream of owning a farm. Mutama bought 17 acres of land outside Kigali and now manages four full-time and several seasonal workers, growing nuts, bananas, sorghum and yucca.

And she’s looking to expand her business. She knows that her success will help provide jobs for others in the community. And she’s also become a role model for her two daughters, who say they dream of going to Harvard and Oxford when they grow up.

Makes you into a new creature?
Jacky Mutama:

Yes, how to manage things, how to become as a leader.
Fred De Sam Lazaro:

The Akilah Institute is also hoping to expand in the coming years, building colleges in seven other African countries.

Fred’s reporting is part of the Under-Told Stories Project at the University of St. Thomas in Minnesota.

The first all-female college in Rwanda is making strides in empowering women from all backgrounds to become the nation’s next business leaders, part of an effort to leave behind an image of a violent country, wracked by genocide. At the Akilah Institute, students prepare for well-paying jobs and financial independence and learn gender equality. Special correspondent Fred de Sam Lazaro reports. 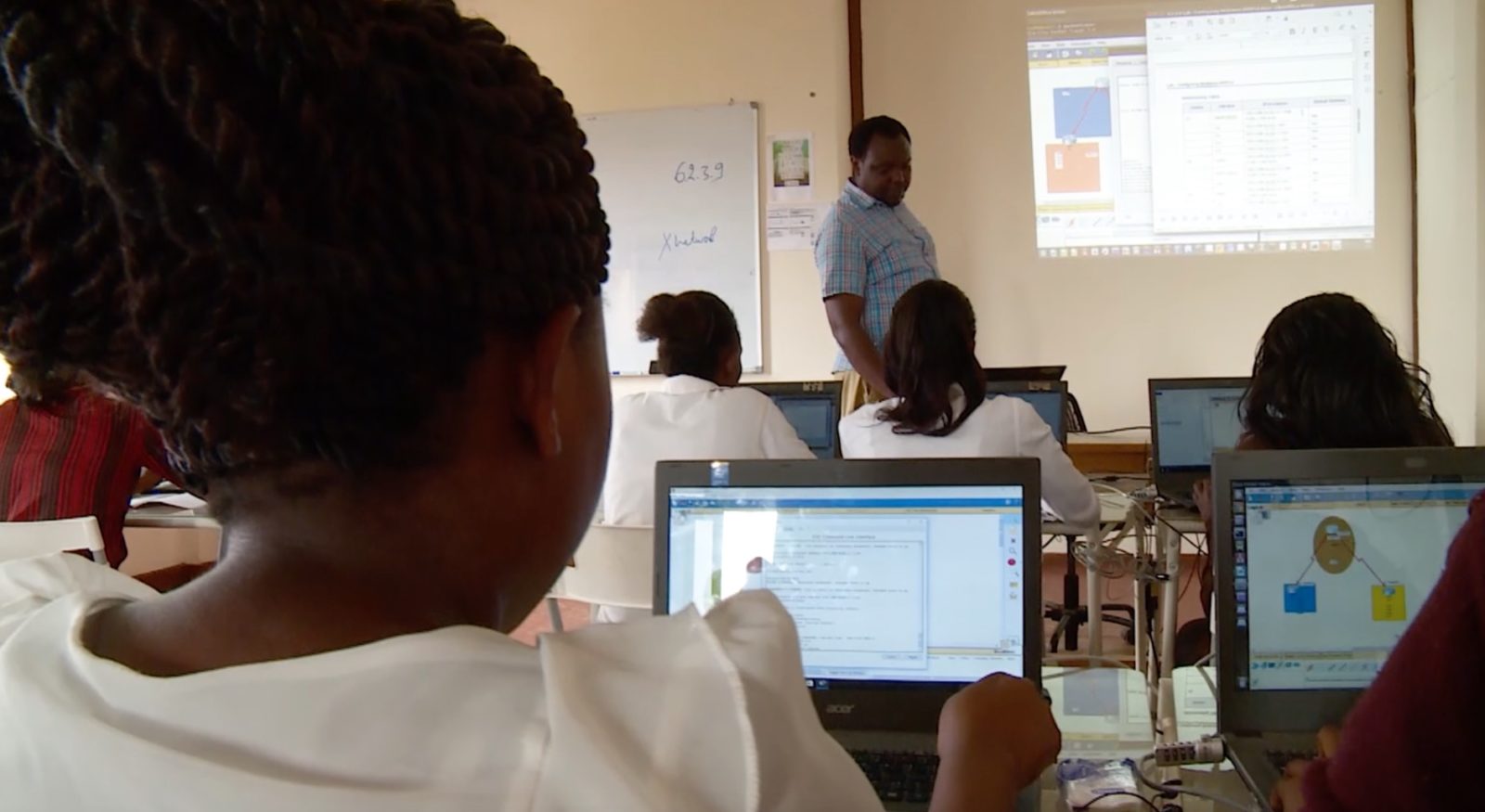 The First of its Kind

The Akilah Institute, the first all-women’s college in the country, is a two-year college which trains women to be leaders in the world of business focussing on the country’s fastest growing sectors and skills gaps.

A Steep Challenge
Even after recovering from a violent genocide that devastated the small country’s population, myriad challenges remain for women entering the business world in Rwanda.
7%
percent of women entered college in 2008
85%
of women made less than $2 a day in 2008

“First, we build in them the spirit of believing in themselves, taking them through a growth mind-set class, where their ability to excel and grow is not fixed, so they start believing, oh, I can do this.