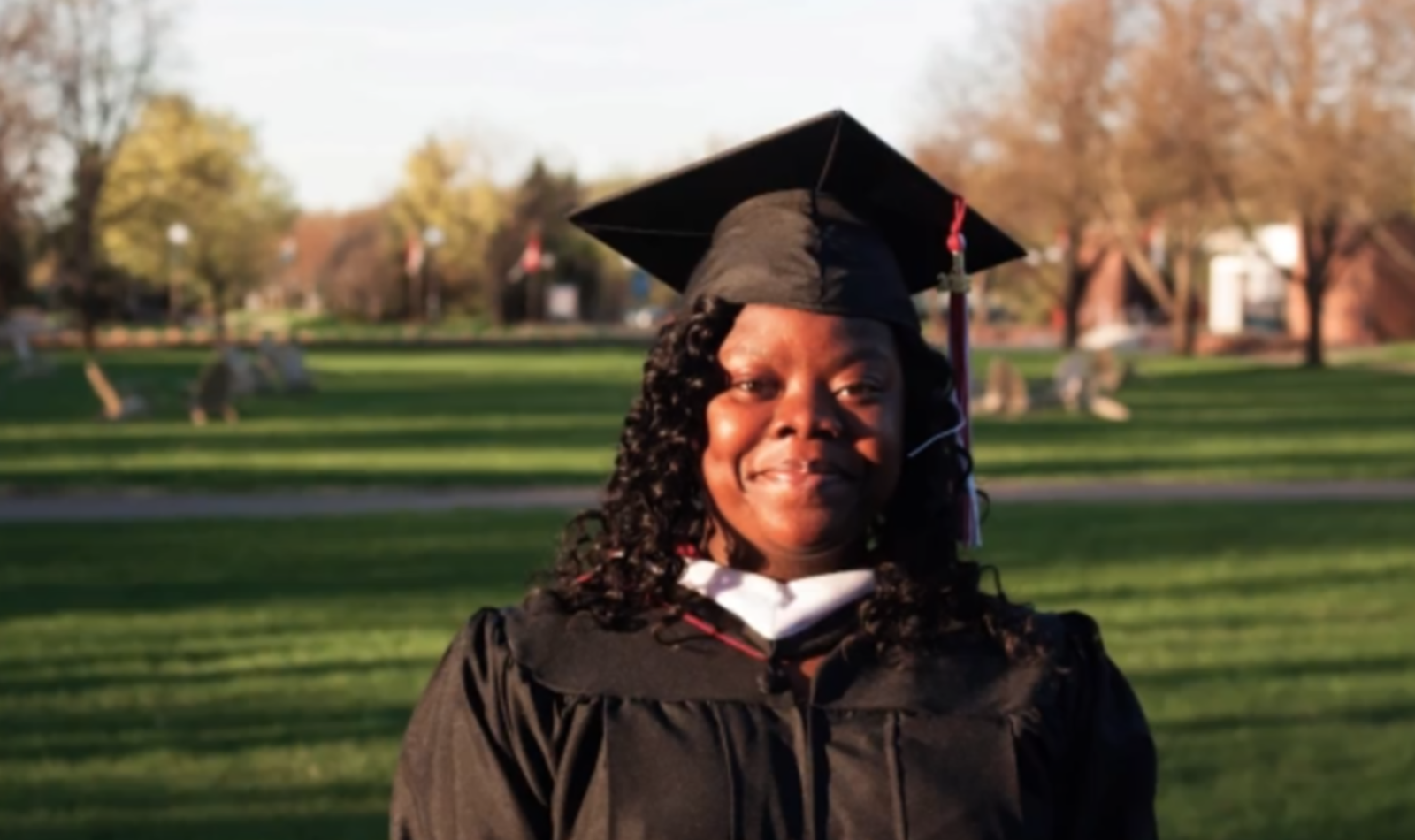 A Scholarship Program That Gives Students More Than Money

The success of students with college scholarships across the country can vary widely. One program in Minnesota boasts a graduation rate one-and-a-half times better than the national average and is especially helpful for first-generation college students.

Special correspondent Fred de Sam Lazaro looks at what’s behind that success for our weekly education segment Making the Grade.

At 22, Precious Drew is a recent college grad and budding entrepreneur. She was recently awarded a fellowship to work on her business plan at a Minneapolis incubator.

Her business is a sustainable beauty product. In college, she and a friend developed a face and body scrub made out of used coffee grounds. For now, she makes it in her mother’s home.

We’re considering a manufacturer to scale up a bit. However, we also pride ourselves on small batches, handmade with love.

The pride that her mother feels is evident from the framed diploma and photos throughout the house.

Her name is Precious. God knew it and I knew it, that she had a gift.

Precious Priscilla Drew was the second youngest of eight children and the first in her family to go to college. She chose the college of Saint Benedict, a private predominantly white school in rural Minnesota, because it offered the most generous financial aid.

It was just over an hour, and a world away from her Minneapolis public high school.

The transition was definitely hard. It was very culture shock, being from the inner city.

College was a struggle at first, but Drew says she was able to stick with it, thanks to a program called Wallin Education Partners. Established 26 years ago, Wallin has helped some 4,500 Minnesota students attend and complete college.

Kelly and John Henry, parents of two young children, are among 65 Wallin donor partners who give $4,000 a year to individual students. Although that’s just a fraction of what college costs, Wallin helps students find additional aid, so that only 40 percent have any debt when they graduate.

I had been volunteering in different Minneapolis public schools helping lower-income, first-generation high school students get into college, and realized, once they’re in college, there’s not a lot of support for them. So we thought, well, we will give them a scholarship and help with the financial part of that.

Donors are encouraged, though not required, to give more than just money. They are also urged to develop a friendship with the recipient. For the Henrys, that meant sending supportive text messages, introducing Drew to business colleagues and inviting her over for home-cooked meals.

I wasn’t expecting to have this level of involvement, but, man, it brings a really special connection with the young person. And we have been amazingly happy with the results.

No matter how much I had done, they would always say, OK, what’s next? We’re proud of you. That’s great. I know you’re going to do more awesome things. What are you doing next?

Drew is not the exception, but rather the norm. The Wallin organization was started by a former CEO of medical device giant Medtronic, the first in his family to attend college, which Win Wallin did through the G.I. Bill.

Sixty percent of Wallin scholars are first-generation college students, 70 percent are students of color, and the average annual income in their households is about $25,000 a year, a challenging demographic, says Wallin CEO Susan King.

If you are a student of color, first in your family, and you’re low-income, the likelihood of completing a four-year degree is about 12 percent. Among all students that enter a four-year program, about 62 percent will complete a degree.

But among Wallin students, that graduation rate is one-and-a-half times higher, at 92 percent. The main reason? A high level of support all along the way, from donors and mostly from eight staff advisers, providing assistance colleges don’t usually offer, says Stephen Lewis, a retired college president who chairs the Wallin board.

In my experience at Carleton and other places, you say, well, she’s an 18-year-old, she’s a 20-year-old, she makes her own decisions.

Not our advisers. Our advisers say, Fred, I understand you weren’t in chemistry last week. What’s going on? Do we need to talk?

So, very, very intrusive, if you like, but very supportive.

Yesterday, I took a test. It was a struggle. I don’t know if I should reevaluate my finance major now.

Stephanie Avelos is a junior business major at the University of Minnesota. From the very beginning, she says adviser Liz Karlen helped her navigate the academic and social challenges.

I remember, like, the first day, I just had so much to talk about. I was like, oh, my gosh, these classes are so different. The students are so smart. I feel so — at disadvantage of.

I’m listening to where they are. And then when barriers pop up, I’m there to kind of help mediate some of the damage that’s done or try to be encouraging.

The Wallin group also links its scholars with each other on campuses, an invaluable network, says Avelos, the daughter of two Mexican immigrants who never finished grade school.

I feel like I’m not alone in this. I feel like I have people I can rely on, who can share similar experiences we have had.

Wallin works with 62 colleges in a five-state region. And going all the way to graduation is critical, says board chair Lewis.

If you go graduate from high school and you have one or two or three years of college, your income potential goes up a little bit. It’s not until you get that degree that you get that big payoff. So the degree is the prize.

Precious Drew hopes that big payoff will come soon, as she continues to build her business. She hopes also to attend graduate school in the years ahead.

The success of college scholarship recipients across the country varies widely. A program in Minnesota boasts a four-year graduation rate one and a half times better than the national average. Recipients come from the most economically disadvantaged families in Minnesota, and most are first-generation college students. Special correspondent Fred de Sam Lazaro reports on Wallin Education Partners.