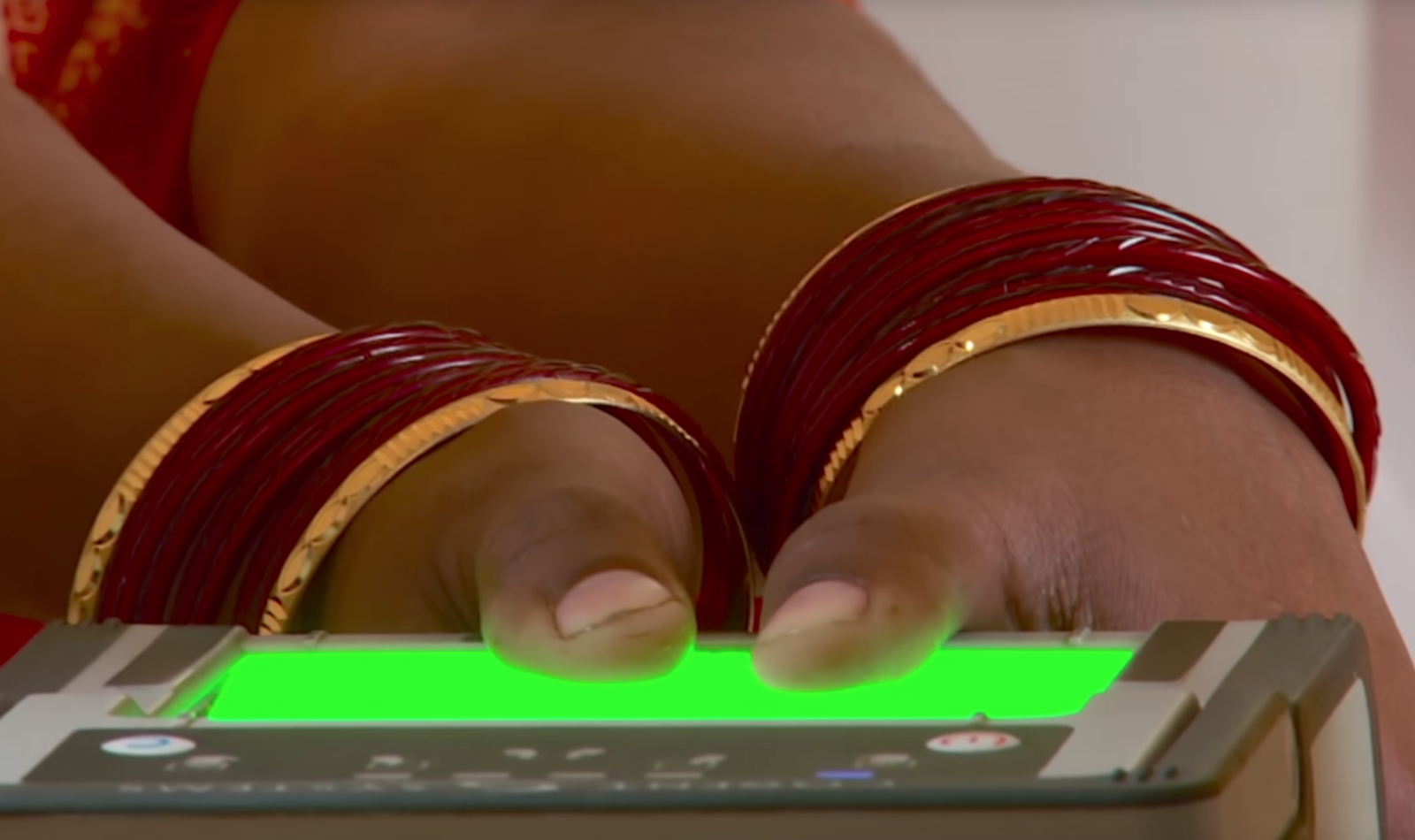 FRED DE SAM LAZARO: Over the past seven years, across India, almost every citizen has stood in line to get a new national ID. It’s a 12-digit number backed by biometric security. A head shot plus fingerprints plus an iris scan. It is the most exhaustive headcount by a country in history. Ajay Bushan Pandey heads “Aadhaar,” the agency running the identification program.

AJAY BUSHAN PANDEY: We have now reached the figure of 1.15 billion people. Among the adults, more than 99 percent of the adults have Aadhaar now.

FRED DE SAM LAZARO: Pandey says the Aadhaar Project, which has so far cost 90 billion rupees — about a billion-and-half dollars — improves national security by making it easier to monitor border crossings with India’s neighbors, like Pakistan and Bangladesh. He says the biometric IDs verify identity and weed out corruption by replacing paper records — if they even exist– with electronic ones. Aadhaar is bringing vast sections of the country that barely entered the Industrial Age into the Digital Age.

FRED DE SAM LAZARO: Many people in India don’t have birth certificates or formal IDs, and the government says that the Aadhaar program will correct this problem by issuing everyone a unique biometric identification. “A tool of inclusion” is what the government calls it.

FRED DE SAM LAZARO: A-third of India’s population survives on less than two dollars a day. They and many low-to-middle income people receive government benefits including temporary employment in public works, farm subsidies, and food commodities distributed through ration shops. The system is rife with fraud: fake paper IDs, fake beneficiaries, and theft by middlemen preying on vulnerable, often illiterate people. The new harder to fake IDs are designed to alleviate these problems says a spokesman for India’s ruling party, the BJP, in the Capital ofDelhi.

FRED DE SAM LAZARO: Given its promise of security and efficiency, the government recently decided to make Aadhaar mandatory for a growing number of financial transactions. Every bank account and tax return must now be linked to one’s biometric ID, and an Aadhaar number is now required to receive any welfare benefits.

AJAY BUSHAN PANDEY: The World Bank has estimated that if government of India uses Aadhaar in all its public welfare schemes, then annual savings would be to the tune of almost 11 billion dollars every year.

SIDDHARTH VARADARAJAN: I think that the savings that the government claims which spring from Aadhaar are vastly exaggerated.

FRED DE SAM LAZARO: Opponents of Aadhaar, like columnist and editor Siddharth Varadarajan, were skeptical when it began as a voluntary program to Improve transparency in the welfare system. Now, they are alarmed. Varadarajan says a country where 300 million people — a quarter of the population — do not have reliable electricity is unprepared to take such a huge digital leap.

SIDDHARTH VARADARAJAN: You need electricity 24/7, you need the Internet up and running 24/7, you need proper data speeds. So given the limitations of technology, given the absence of a privacy law, for the government to steamroller this kind of scheme, to my mind seems to be rather ill advised.

FRED DE SAM LAZARO: Internet service is at best sporadic in many parts of India, and in regions where Aadhaar IDs are now required, one recent report by a workers’ rights group found the system has done little to reduce corruption. Attorney Gautam Bhatia represents some Aadhaar opponents and citizen activists who’ve taken the government to court.

GAUTAM BHATIA: For example, if you are, say, a farmer in the rural areas, then say you are entitled to rations or to kerosene, for example, oil, and when that is based upon your biometric authentication, you have to go to the person who is authorized to authenticate you. And that person may simply say your authentication failed and not give you your entitlement, and then you are basically left without that for that one month, and in fact the report shows that many families have gone many months without access to very important, important, entitlements.

FRED DE SAM LAZARO: Bhatia says the new technology will not wipe out corruption but it has violated a basic tenet of democracy: privacy.

GAUTAM BHATIA: You’re giving the state centralized access to a very vast citizenry’s data, personal data. That is where the problem lies. You are fundamentally altering the relationship between the state and the individual. You are putting the individual in a position where her actions are visible in a certain way to the state, whereas we think that the relationship should be the other way around.

FRED DE SAM LAZARO: Already there have been several leaks of personal data. Aadhaar opponents worry rogue operators or hackers could steal biometric data like fingerprints, allowing Indians to be profiled for commercial or political purposes. But Aadhaar’s director says his agency’s systems are state of the art and privacy concerns are overblown. He adds, when the system authenticates a person, it does not keep any records of transactions.

AJAY BUSHAN PANDEY: Aadhaar also places restriction on merging of various data bases. So you cannot link the various databases and create a surveillance tool. Aadhaar Act provides a very strong protection against any such move, so any violation of the law will be taken very seriously.

FRED DE SAM LAZARO: Editor Varadarajan is not reassured, because, he says, the rule of law is frequently flouted by corrupt or incompetent officials.

SIDDHARTH VARADARAJAN: If India was a better governed state, if the rule of law operated in a more transparent manner, half of these objections would vanish.

FRED DE SAM LAZARO: When he was in the opposition, Indian Prime Minister Narendra Modi called Aadhaar a gimmick. But in power, he’s embraced it — insisting his government has built in privacy safeguards. And Modi wants to vastly expand its scope.

TV DEBATE: “The whole act was enacted for the purpose of passing on the subsidies more efficiently, not to convert a democratic country into a police state.”

FRED DE SAM LAZARO: Aadhaar has sparked robust debate on Indian news outlets like “Mirror Now” but not so much in the streets.

MAN: “It works…to open a bank account, it works…”

FRED DE SAM LAZARO: In this poor section of Delhi, where almost everyone has an Aadhaar number, there’s been no controversy, because people told us they have far more basic worries.

FRED DE SAM LAZARO: “Nothing lost, nothing gained” with the new ID, this woman said, as she washed cans she’d fill with water as soon as the municipal tanker arrived. There’s no running water here. And this man complained ration shops often claim they are out of the subsidized rice and other essentials. India’s Supreme Court has affirmed the government’s right to link Aadhaar to welfare benefits and tax returns. But it has yet to rule on whether being forced to provide biometric information violates an individual’s right to privacy. When the court answers that question, the fate of the world’s largest single database of biometric information will be at stake.

India’s Aadhar biometric ID program reaches 1.15 billion enrolled. It is the most exhaustive headcount by a country in history.

99%
of India’s adults now have Aadhaar. 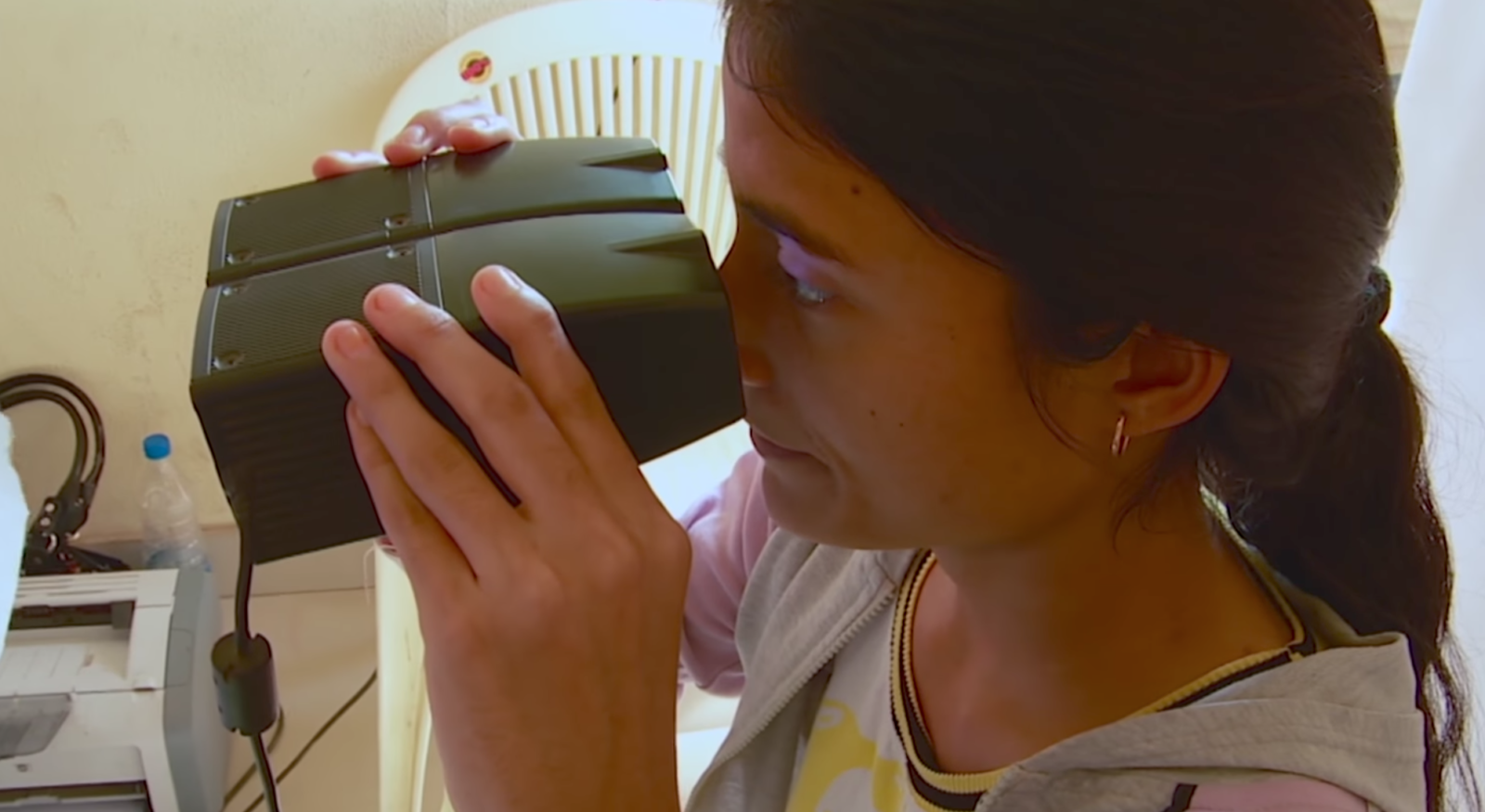 The Aadhar ID system records biometric information, such as fingerprints, retina scans and other personal information that supporters say makes it more secure, but critics say only increases the risk if compromised.

The Security Debate
In September, 2018, the Indian Supreme Court ruled that Aadhar was constitutional allowing it to keep operating. But that hasn’t stopped the debate of privacy versus efficiency.

“The World Bank has estimated that if government of India uses Aadhaar in all its public welfare schemes, then annual savings would be to the tune of almost 11 billion dollars every year.”

“You need electricity 24/7, you need the Internet up and running 24/7, you need proper data speeds. So given the limitations of technology, given the absence of a privacy law, for the government to steamroller this kind of scheme, to my mind seems to be rather ill advised.”