Judy Woodfruff:India has reported more than one million COVID cases, a number exceeded only by the U.S. and Brazil.Special correspondent Fred de Sam Lazaro reports on the situation in Delhi. It’s part of his series Agents for Change.

Fred de Sam Lazaro:These women are India’s foot soldiers in the fight against the coronavirus, their job, to find and help those with symptoms.They are called accredited social health activists, or ASHA workers. In remote villages, in cramped urban slums, across India more than one million women like Bhagwan Devi and Kundan Devi fan out on foot each day.Until the pandemic, they would mostly check on pregnant women or see that children are up to date on their shots.

Bhagwan Devi:Put your mask on.

Kundan Devi (through translator):We have to check for patients. We bring them oximeters, take their daily readings.

Fred de Sam Lazaro:This, they add, with little guidance or even protective gear from the authorities.

Kundan Devi (through translator):Masks. If masks are available, we get them. Otherwise, we have to buy our own. And gloves, if we want gloves, we’re on our own.

Fred de Sam Lazaro:Global health experts say ASHA workers are a key, but so far poorly utilized resource to help contain the coronavirus in a country struggling to emerge from a three-month lockdown. Traffic has been slowly returning to Delhi’s streets and shops have begun to open.The crowds are much smaller than pre-COVID times, except in food markets. Here, social distancing is just not an option. Like much of urban India, this city is bracing itself.Hospitals across India have been overwhelmed with COVID cases. In Delhi, a temporary 500-bed overflow facility, with limited medical equipment, has been set up for people suffering COVID symptoms. There’s also a new 10,000-bed quarantine center, the world’s largest.Many of the city’s 20 million residents live in crowded single-room spaces.

Manish Sisodia:Thirty percent of the people don’t have spare rooms if they have COVID at their homes.

Manish Sisodia:For people who feel some — any discomfort, even if they are in asymptomatic condition, they can be brought to these centers.

Fred de Sam Lazaro:As Delhi prepares for a surge in COVID cases, there’s been little evidence of any surge in economic activity several weeks after the lockdown ended.

Man (through translator):Sir, there’s no work. There’s just no work.

Fred de Sam Lazaro:Across the city each morning, tradesmen wait at labor chowks, or exchanges, for employers or their agents to come by with work offers, usually in construction.Like the majority of workers in India’s economy they are informal, or off the books, paid by the day. So no work means no pay.

Man (through translator):I have three daughters. Our family is in a terrible situation. We get food from here and there. And I’m not alone. All poor people are in this situation.

Raj Panjabi:The poor often suffer the worst because they have the least ability to gain access to basic essential services during those periods.

Raj Panjabi:Then, essentially, one person goes on to infect three people. And if that scenario plays out just 10 times, the first case will have led to more than 59,000 cases.But if any one of those first few patients was isolated, you dramatically stop the transmission rate.

Manish Sisodia:Frankly, it was hard to manage because, in India, systems are not online.

Fred de Sam Lazaro:Besides not being online, he admits Delhi had a rough start. Test results took two to three days, allowing infections to spread. Testing capacity still lags far behind cities like New York, but it has quadrupled since the early days, with a fleet of mobile units testing some 25,000 people per day, and with quicker results.

Manish Sisodia:Now you can get the result in maximum one hour. So, that is helping.

Fred de Sam Lazaro:India’s government is also touting an app that lets smartphone owners know of any nearby active COVID cases. The government says it’s had 100 million downloads.The problem is, not everyone owns a smartphone, including many ASHA workers. They are officially classified as volunteers, so they get no benefits and a monthly stipend as low as 1,000 rupees, or $13.

Bhagwan Devi (through translator):I don’t have the salary. I can buy gloves or pay the rent or feed myself. What do I do? We’re scared, because, if they’re positive, we have to touch their bodies. We can only hope that we don’t become sick.

Kundan Devi (through translator):For all the extra work with coronavirus, we get nothing. The 1,000 rupees we get, will that even buy medicines if I get sick?

Fred de Sam Lazaro:Dr. Panjabi says ASHA workers could be a huge asset, since they’re ideally positioned to do contact tracing.But the reality on the ground is not that simple. ASHA workers have been attacked, or, more commonly, just ignored.

Kundan Devi (through translator):Only yesterday, I was told: Don’t come near the gate. Just leave as quickly as you can.I said: I will stand on the road. Just give me your name and phone number and tell me if this person came by or didn’t come by. That’s all you have to tell me.They wouldn’t say anything.

Fred de Sam Lazaro:Experts say there’s a pressing need for public education. Misinformation abounds about coronavirus and how it’s spread, leading to social stigma, or, as we found at the labor site, more immediate worries.

Man (through translator):What do I think about coronavirus? I have nothing to eat.

Fred de Sam Lazaro:“I will more likely die from hunger before I get coronavirus,” he says.For the “PBS NewsHour,” with Rakesh Nagar in Delhi, this is Fred de Sam Lazaro in St. Paul, Minnesota.

More than one million cases of COVID-19

and more than one million community health workers

Accredited Social Health Activists, or ASHA workers, are India’s foot soldiers in the fight against the coronavirus. Their job is to find and help those with symptoms.

“For all the extra work with coronavirus, we get nothing. The 1,000 rupees we get, will that even buy medicines if I get sick?”

Kundan Devi, ASHA worker
ASHA workers are officially classified as volunteers, so they get no benefits and a monthly stipend as low as 1,000 rupees, or $13. 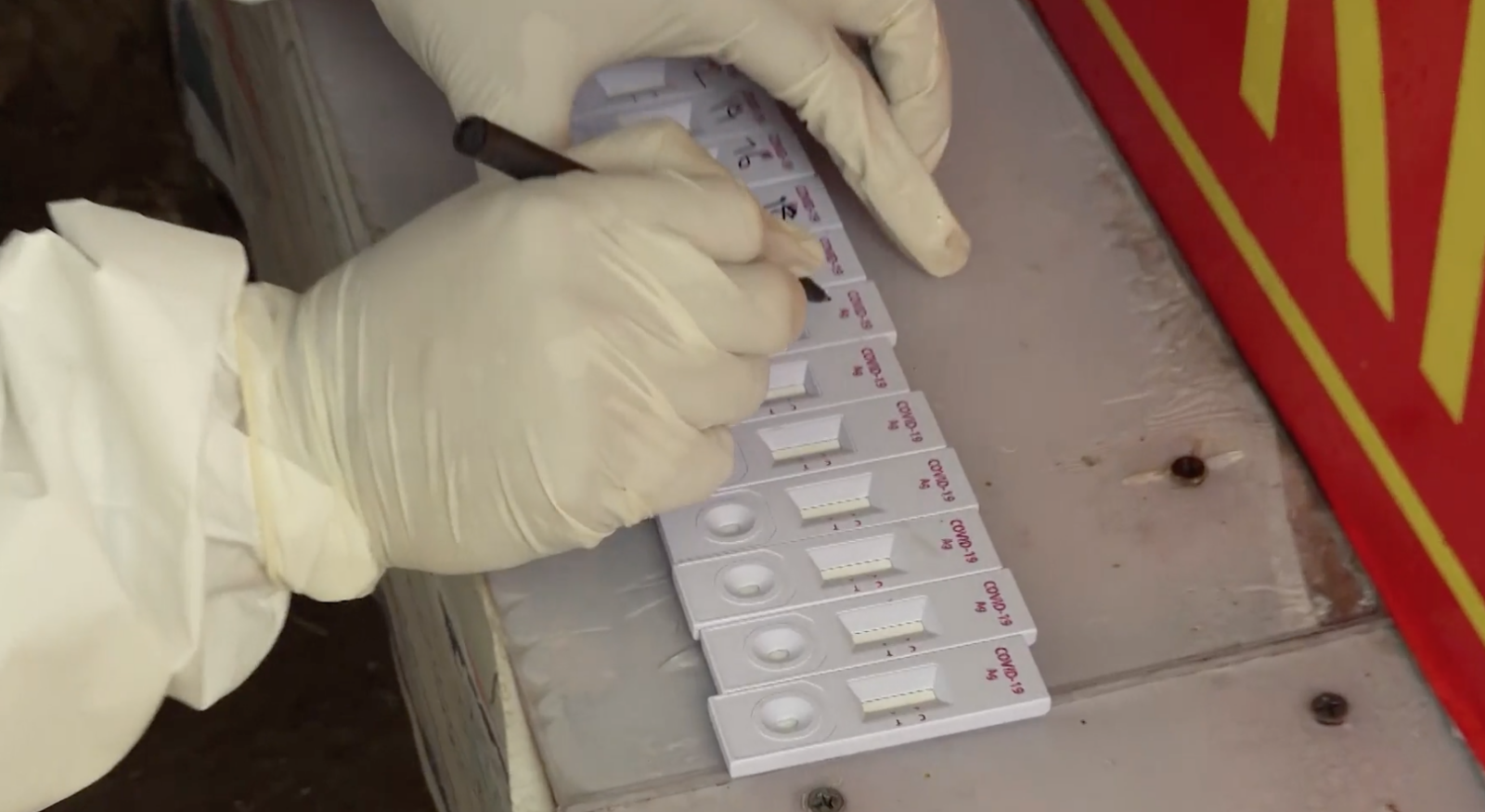 Dr. Raj Panjabi says ASHA workers could be a huge asset, since they’re ideally positioned to do contact tracing. But in reality, ASHA workers have been attacked, or, more commonly, just ignored.