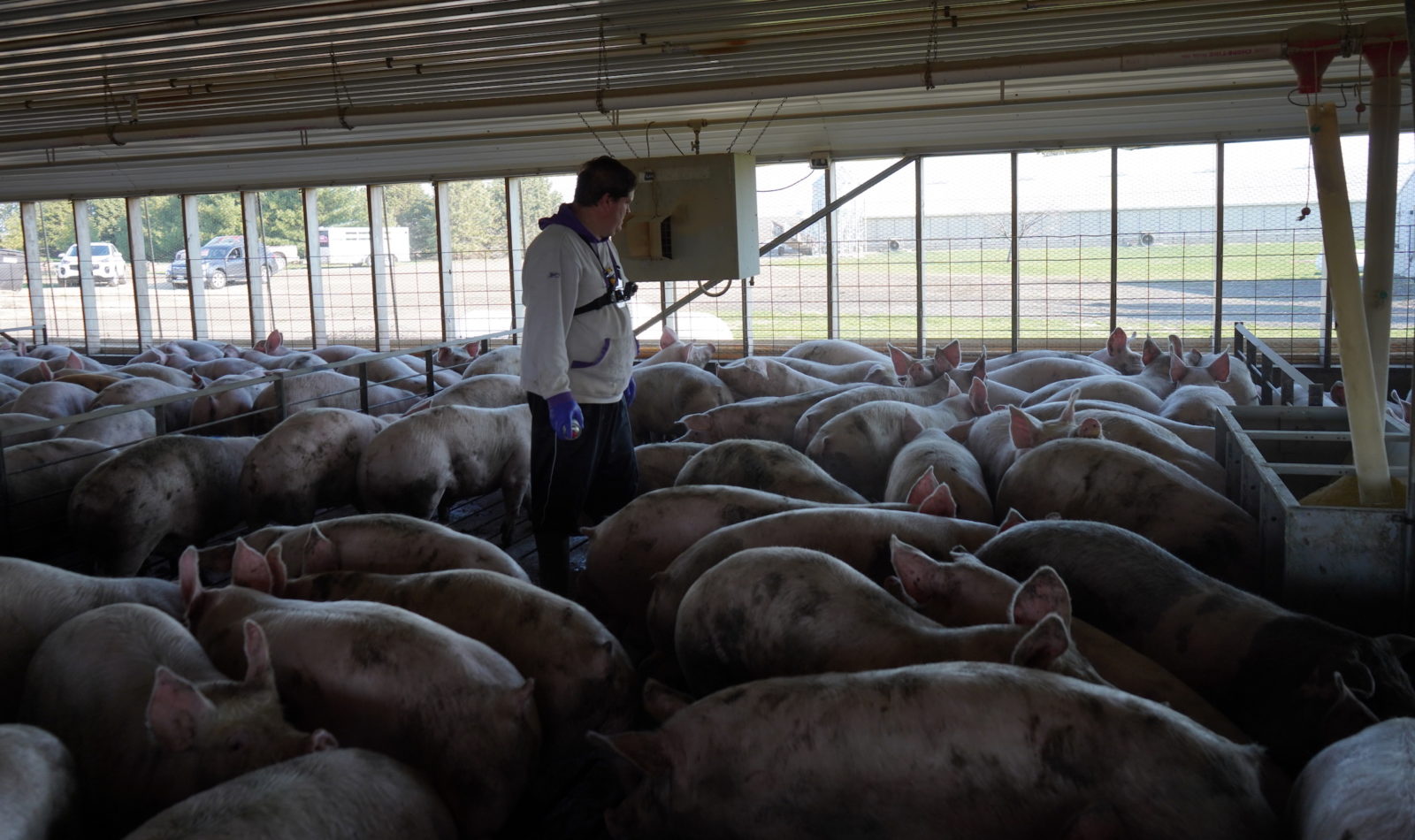 Judy Woodruff:We’re going to focus now on the questions around meat processing plants, worker safety and the food supply.While President Trump has signed an executive order to keep the plants open, a number of processing facilities remain closed.In Minnesota, a pork plant did reopen today briefly, not to resume processing hogs, but to euthanize a growing surplus of animals.Special correspondent Fred de Sam Lazaro begins our look with a report on how this is playing out for farmers.

Fred de Sam Lazaro:It’s spring planting time in Southern Minnesota. Soon, these vast prairies will sprout soy beans and corn destined for markets around the world.But the largest number of consumers they will feed are not human and not far away. Minnesota and neighboring Iowa are among the largest pork-producing regions in the world.Mike Patterson’s family has been doing this for multiple generations. They are part of an elaborate food chain that ends, in this case, at the Smithfield plant 200 miles away in Sioux Falls, South Dakota.Like more than two dozen meatpacking facilities that have seen closure across the country, this one has been shuttered since April 11 after a COVID-19 outbreak. So has another nearby pork plant, JBS, in Worthington, Minnesota.Patterson says he’s looking at staggering losses.

Mike Patterson:If we weren’t able to harvest any of the hogs on our farm, we’re looking at probably $450,000. And we’re — we’re not a big operation.

Fred de Sam Lazaro:This barn is one of three on Patterson farm. It holds 1,000 animals. And it’s here that you get a sense of the scale of the industry that they are part of.The Smithfield plant in South Dakota, to where these pigs would normally go, takes in 20,000 pigs each day.

Mike Patterson:I don’t think I appreciated the efficiency of the whole system, and when one piece of that system goes down. You know, I knew it, but, boy, I didn’t — I maybe didn’t appreciate it as much.

Fred de Sam Lazaro:While plant workers continue to receive 80 percent of their wages during the shutdown, it’s hundreds of hog farmers like Patterson who say they stand to lose the most.Animals are brought to these so-called finishing barns from nurseries. Here, they are raised over 16 to 20 weeks to a nearly exact weight required by the packing houses like Smithfield. As they’re moved out, a new batch of young animals is ready to take their place.

Mike Patterson:Obviously, those barns aren’t empty. So where do those pigs go?

Fred de Sam Lazaro:So, you have some ugly options.

Mike Patterson:Definitely. I know, in the industry, there’s been talk of euthanasia of swine or depopulation of harvest-ready hogs. That’s something that we, as farmers, just absolutely, we don’t want it to happen.

Fred de Sam Lazaro:A couple of hours away, the much smaller Sobocinski farm has just about 300 pigs, whose owner says they’re really thriving.

Paul Sobocinski:Give the animals a little bit more freedom to move about.

Fred de Sam Lazaro:Paul Sobocinski decided two decades ago to scale back from what he calls the industrialized system that now produces much of the nation’s meat.Has it been the right decision financially?

Fred de Sam Lazaro:His animals are processed at a small nearby slaughterhouse, where no one has tested positive for COVID-19.The meat is sold through a national network of independent producers called Niman’s Ranch. Sobocinski has long been an activist against a system that he says has concentrated power and profit in a few corporate hands, at the expense of both laborers and farmers.

Paul Sobocinski:Meat prices went down substantially because of the coronavirus. Who’s grabbing all that money? Has food come down in the grocery store? No, it hasn’t.I think it’s important that we retool what we’re doing out here. We need more local processing, so more of that is done here in the community. It helps build the community.

Fred de Sam Lazaro:For Patterson, however, it boils down to keeping pork prices as low as possible.

Mike Patterson:I understand that local piece of it, and I appreciate that. But how do we feed the masses and do it cheaply? You can’t do that on a smaller scale. You need the — you need the efficiencies of size of scale to be able to get that done.

Fred de Sam Lazaro:The debate is not new and may well return post-COVID-19. Just how much are American consumers willing to pay for their food? And has the pandemic changed attitudes?But, more immediately, Patterson and hundreds of fellow hog farmers are watching anxiously for word on when the two mega-factories can reopen, tweaking the diet of their animals to slow their weight gain.

Mike Patterson:We have maybe bought a week to 10 days, trying everything we can to slow them down.

Fred de Sam Lazaro:When the plants do reopen, however, workers could be farther apart on the production line to prevent the spread of COVID-19. That would slow down the line, which, in turn, would mean fewer animals at the plant and more, Patterson says, in his barns with nowhere to go.For the “PBS NewsHour,” this is Fred de Sam Lazaro in Kenyon, Minnesota.

with nowhere to go

Minnesota and neighboring Iowa are among the largest pork-producing regions in the world, but farmers there are thinking the unthinkable: euthanizing healthy animals, because COVID-19 has shuttered the packing plants they were destined for.

Mike Patterson’s family has been doing this for multiple generations.
They are part of an elaborate food chain that ends, in this case, at the Smithfield plant 200 miles away in Sioux Falls, South Dakota.
More than two dozen meatpacking facilities
have seen closure across the country. Smithfield has been shuttered since April 11 after a COVID-19 outbreak. 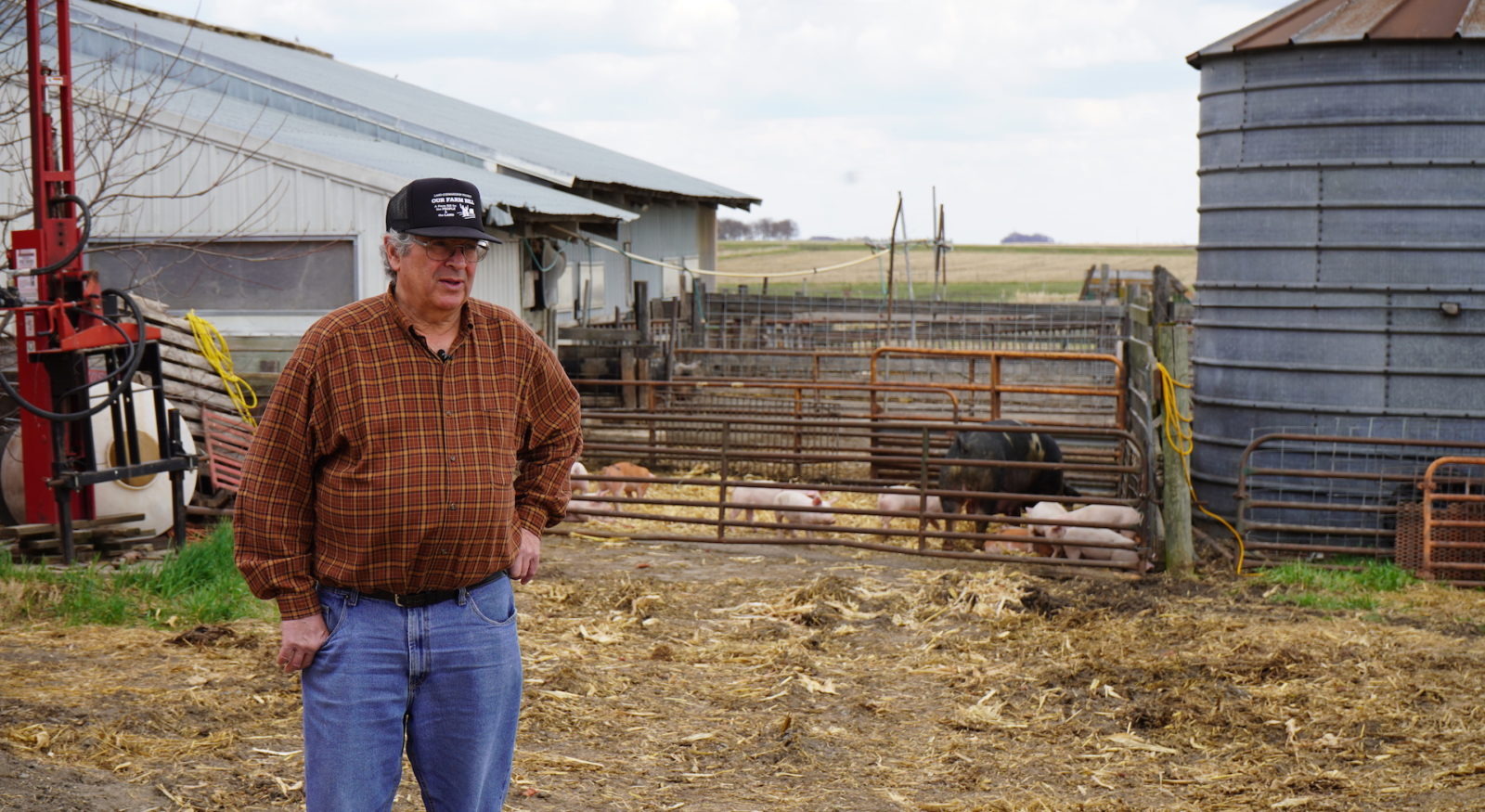 “We need more local processing, so more of that is done here in the community.”

“I understand that local piece of it, and I appreciate that. But how do we feed the masses and do it cheaply? You can’t do that on a smaller scale.”
– Mike Patterson