The New Business Women of Pakistan

A program that gives small loans to needy woman is making a difference for those in poverty.
Play Story
Subscribe to Stories

ROSHANEH ZAFAR, investment banker: Over the past 10 years, a lot of changes have happened in this neighborhood.

FRED DE SAM LAZARO: Roshaneh Zafar is an investment banker with a mission, trying to stamp out poverty in neighborhoods like this one in her hometown of Lahore, Pakistan.

Educated in the United States, Zafar has made an estimated one million loans to some of the poorest people here.

ROSHANEH ZAFAR: You may not see the same poverty that we saw a — over a decade ago. So, after 10 years, you begin to see changes in the family and their lifestyle.

FRED DE SAM LAZARO: Her business in microfinance, lending small amounts of money to start and expand businesses, is tough to make work in a country where two-thirds of the people live on less than $2 a day. And it’s gotten even tougher in recent years.

Last summer’s epic floods meant an end to all loans in the affected regions. Those who had lost everything needed immediate assistance to get their lives back in order, rather than loans they would have to repay. And there’s the ongoing threat of terrorism. She says it’s both a threat and an urgent reason for her work.

What’s the connection between these communities and terrorism in the work that you’re doing?

FRED DE SAM LAZARO: But it’s gotten harder to convince people that there’s anything to be hopeful about, especially when violent events make it hard to go out and earn money, hard to afford food today, let alone plan for tomorrow.

ROSHANEH ZAFAR: Two years ago, clients were beginning to talk about the future, and they were more — more, you know, optimistic about the future. Now we are saying the same. OK, we will do the next 24 hours. Let’s see how it goes. So, that’s the mind-set shift that we have — we have seen.

FRED DE SAM LAZARO: But Zafar and her group Kashf, which means “Revelation,” were determined to make microfinancing work. So they changed direction. Rather than focusing on groups, they started concentrating on individuals, spending more time with each family to get to know them and to teach them how to succeed.

FRED DE SAM LAZARO: Zafar targeted women because their role in Pakistan’s economy has traditionally been hidden behind closed doors.

ROSHANEH ZAFAR: The women businesses are home-based businesses. And…

FRED DE SAM LAZARO: So, behind a lot of these storefronts are homes and families run by women, and those are the targets of your — of your loan program?

FRED DE SAM LAZARO: Across Pakistan and in the narrow byways and alleys of this ancient city are small family businesses, financed with loans from Kashf. Since 1995, it has given out about $200 million to more than 300,000 women. Many are repeat customers.

She took us to visit Ruquia Boota, who borrowed 120 U.S. dollars eight years ago and has grown her embroidery business, with the help of two more loans. She now employs her two daughters and occasionally up to 10 other women from the neighborhood.

ROSHANEH ZAFAR (through translator): How do you know what is selling and how much material to buy?

WOMAN (through translator): We get orders and then buy accordingly, and we also know what the trends are.

ROSHANEH ZAFAR (through translator): Where do you get your materials from?

FRED DE SAM LAZARO: Her questions are not just polite conversation. Kashf’s loan officers are required to closely follow their borrowers’ business affairs. It’s all part of a financial education that begins before the first money is handed over.

MAN (through translator): I’m going to show you this chart. It has four kinds of expenses: necessary, unnecessary, emergency, and wish list.

FRED DE SAM LAZARO: Prospective borrowers get basic tips on how to budget their expenses and rank their priorities.

MAN (through translator): Where would you put the cell phone?

FRED DE SAM LAZARO: Kashf gets most of its funds by borrowing from commercial banks and a development fund backed by Pakistan’s government and the World Bank. It disperses its loans, typically $150 each, after rigorous vetting.

Every day, young loan officers, most of them female, fan out to visit clients, like Sobia Saeed. She has steadily expanded her salon business with three loans.

WOMAN (through translator): I have been doing these kids’ hair today — one more left to do.

WOMAN (through translator): How much do you charge for each?

FRED DE SAM LAZARO: That’s about 40 U.S. cents. This 27-year-old entrepreneur is doing a lot better than before, but, like most borrowers, is hardly well-off.

It’s one reason Zafar says her group makes sure that loan proceeds are put to their intended business purpose, not to household or even emergency use. That is also a change.

ROSHANEH ZAFAR: If the money is misutilized — let’s say they have spent half of it to — you know, to fix the roof in the house — then the loan officer goes and informs the branch manager, and we tag that loan. And we will then monitor it.

FRED DE SAM LAZARO: 98 percent of the loans are repaid. But, for Zafar, it’s not just about the money. It’s about changing the status and well-being of women.

ROSHANEH ZAFAR: Every two or three years, we do an impact assessment. And we discovered that 40 percent of men — we interview men also — they said, “We have stopped beating our wives,” as a result of the loans, because most quarrels are over money, lack of money.

54 percent of them said, “We respect our wives much more now.” And inter-spousal relationships have improved. And over 80 percent of men said to us that, “We now consult our wives in all decisions.”

While we — when we talked to the men — women, they corroborated these results.

FRED DE SAM LAZARO: Zafar is a fierce advocate of microlending, but she’s learned its limits.

ROSHANEH ZAFAR: Microfinance has been bandied as the solution for poverty alleviation. I don’t think we have done ourselves justice by falling into that trap either. Financial inclusion definitely helps, but it’s not the only thing. You need education. You need health. And that takes time. And it’s not going to be as visible as, let’s say, constructing a dam is going to be.

FRED DE SAM LAZARO: But she also can see some long-term results beginning to appear.

Sadhiya Aijaz and her husband, Mohammed, worked for years cutting metal by hand into short strips to be bent into chain links. Loans brought them the machines.

SADHIYA AIJAZ, Pakistan (through translator): We are able to produce a lot more now. There’s also more money. It’s much easier for us now.

FRED DE SAM LAZARO: But, most importantly, they can now afford to get their children educated, to prepare the next generation for a better life.

FRED DE SAM LAZARO: For Roshaneh Zafar, the next challenge is to help more women scale up their enterprises. Kashf has set up a bank to help borrowers move from the typical $150 loans to $1,000 or more. Her goal is to help 50,000 current borrowers create larger enterprises in the next three years.

JIM LEHRER: Fred’s reporting is a partnership with the Under-Told Stories Project at Saint Mary’s University in Minnesota.

A Pakistani program that gives small loans to needy woman is making a difference for those in poverty. Special correspondent Fred de Sam Lazaro reports on the program that focuses on women. 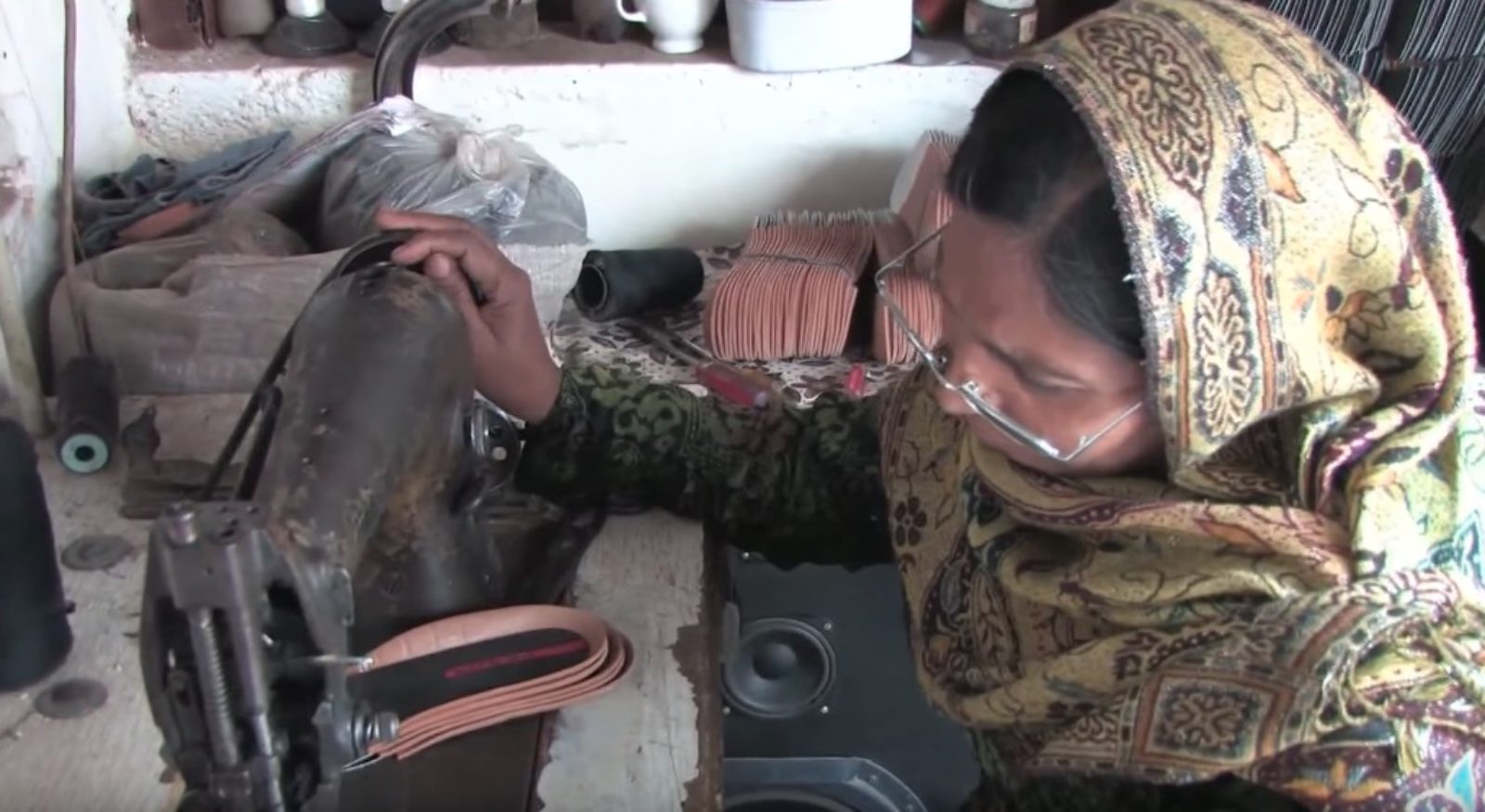 Two-thirds of the people live on less than $2 a day.

98%
of the loans are repaid.
But, for Zafar, it’s not just about the money. It’s about changing the status and well-being of women.
One piece of the puzzle

“Microfinance has been bandied as the solution for poverty alleviation. I don’t think we have done ourselves justice by falling into that trap either. Financial inclusion definitely helps, but it’s not the only thing. You need education. You need health. And that takes time. It’s not going to be as visible as, let’s say, constructing a dam is going to be.”