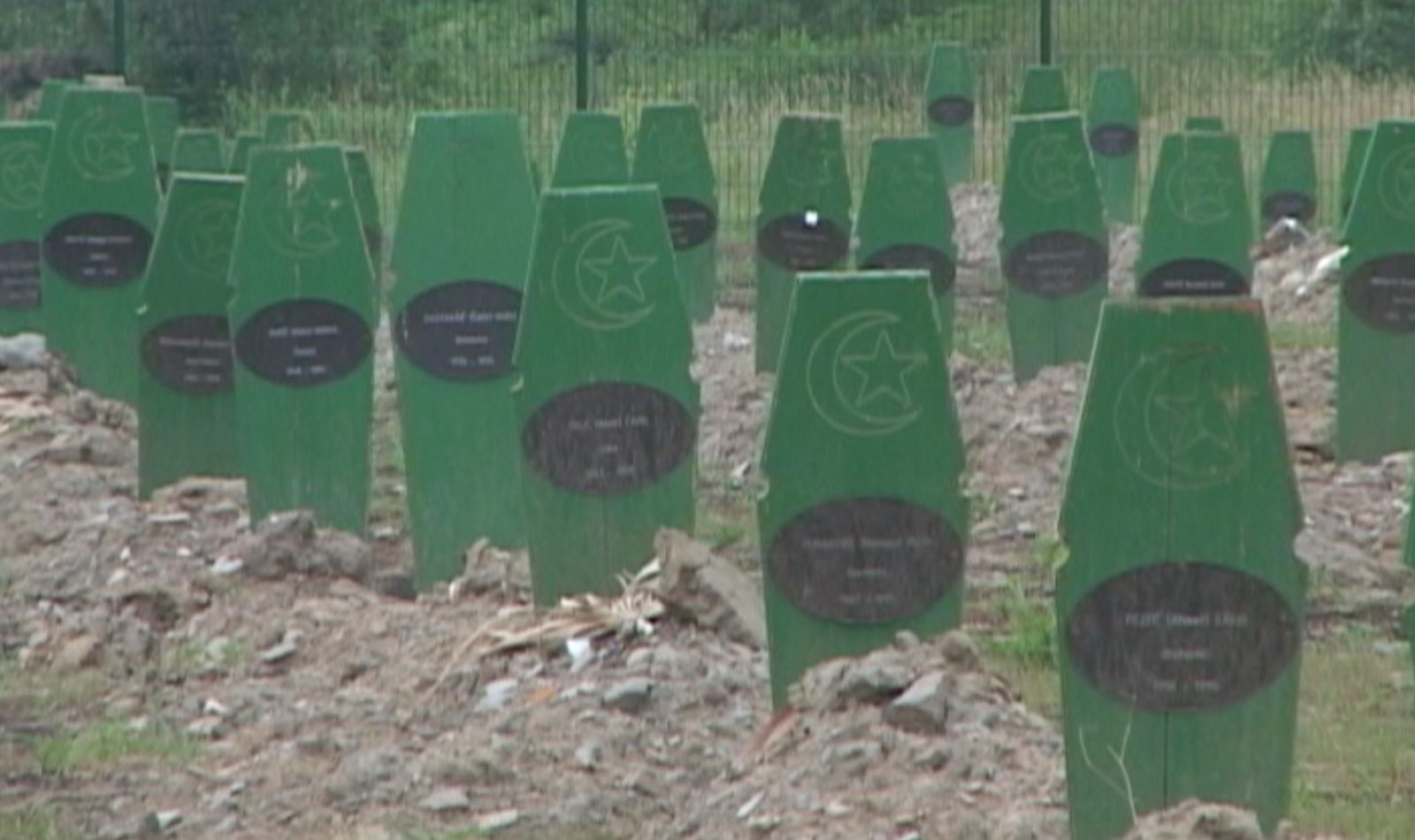 Rebuilding after the war
Play Story
Subscribe to Stories

FRED DE SAM LAZARO:This summer the small, war-ravaged city of Srebrenica held a party. For a week, there was music, poetry, a children’s art contest — all to signal a new start, said the mayor, who is Muslim, and his deputy. She’s Serb.

MILKA RANKIC, Srebrenica Deputy Mayor ( Translated ):I am sick and tired of Srebrenica being called the last place on earth.

ABDURAHMAN MALKIC, Srebrenica Mayor ( Translated ):The main idea for this gathering is to show that there is a life, a future for Srebrenica and not to go back to the past all the time. Of course, keeping it in mind, not forgetting the past.

FRED DE SAM LAZARO:Almost every building bears pockmarks and scars seven years after the war ended. The only construction activity of any size is the new cemetery. Buried here are Muslim victims of one of the worst massacres of a war that gave rise to the term “ethnic cleansing.”Even though Srebrenica had been declared a U.N. safe area, with a small contingent of Dutch peacekeepers, it was overrun by Serb forces, led by General Ratko Mladic, who has since been indicted as a war criminal. Muslim men were separated from women and children, who were allowed to leave the city. But an estimated seven to eight thousand men were shot and buried in mass graves.Nationwide, a quarter of a million people died. Two million people, about half Bosnia’s population, were displaced from their homes in the four-year war. A peace accord was reached in Dayton, Ohio, and signed by Paris in 1995 by leaders representing the Serb, Croat and Bosniak, or Bosnian Muslim populations.

BILL CLINTON:In Dayton these three Balkan leaders made the fateful decision for peace. Tomorrow, you must turn the pages of this agreement into a real-life future of hope for those who have survived this horrible war.

FRED DE SAM LAZARO:The treaty recognized territory captured by Serb forces as an autonomous region, called the republic of Srpska, and a Bosnian federation, controlled by Muslim and Croat forces. A federal government in the capital, Sarajevo, would deal mostly with foreign affairs.But the treaty also stipulated that displaced people had a right to return to their prewar homes, no matter which sector they’d lived in. That brought Hatija Mehmedovic back to her home in Srebrenica. A Muslim woman, she is now living alone in a neighborhood that has become largely Serb.

HATIJA MEHMEDOVIC ( Translated ):I am not afraid of anything anymore, because the thing I was most afraid of has already happened to me.

FRED DE SAM LAZARO:She last saw her husband and two teenaged sons in July 1995, when they, along with thousands of other Muslims, fled Serb forces. She was coaxed into taking a bus ride out of the city. The men fled on foot through nearby forests, hoping to reach Muslim-held territory.

HATIJA MEHMODVIC (Translated):We were arguing about whether or not I should go with them through the woods or not. And when my younger son would not allow it, he was afraid that I couldn’t walk through the woods as they could, so there we split.

FRED DE SAM LAZARO:Mehmodvic’s family members are missing, likely killed. Like thousands of others, she must begin rebuilding her life on her own.With 13,000 peacekeeping soldiers, including about 1,600 Americans patrolling, international agencies have returned almost one million refugees to their prewar homes. The complex musical chair process of getting people back to their original homes has largely gone without incident, says Rhodri Williams, a legal advisor on property issues.

RHODRI WILLIAMS, Legal Advisor:One of the things that we can be proud of in Bosnia is that we will not face a situation in 10 years, in 15 years, where second and third generations of displaced and dispossessed people are still holding the keys to their old family home and saying, “when will we get it back?”

FRED DE SAM LAZARO:What they get back, however, is often, literally, just a shell of the home they left. Many choose or hope to sell their homes and move on.The mostly Croat village of Borovica had 1,500 residents before it was emptied by Muslim forces. Today some 110 families have returned. Peacekeepers – Turkish soldiers in this case – patrol regularly, but they are unable to make day-to-day life easier for returnees like Grga Vukancic.

FRED DE SAM LAZARO:More than anything else, he says, they don’t have jobs. Most people in rural areas must get by on subsistence farming or like Grga Vukancic, on small pensions.Bosnia’s old industrial economy – factories and mines built in socialist times – were knocked out during the war. Today’s they’re either too expensive or uncompetitive to interest investors.There’s a deceptive appearance of prosperity in the capital, Sarajevo. In fact, unemployment is as high as 40 percent. Most of the spending is done by the twelve to fifteen thousand foreigners, working for various international agencies. They put some $30 million into the local economy each month.The most visible evidence of foreign aid here are religious structures. In Borovica, for example, donations from German Catholics have helped rebuild the Catholic Church.In Tuzla, Saudi donations have brought this new mosque. Aside from the construction jobs, this has done little to relieve the dire economic conditions. Father Predrag Jeftimir is a Serb orthodox priest in Banja Luka.

FR. PREDRAG JEFTIMIR (Translated):We are actually hardworking people, but when you don’t have work and when you have such low employment rates, then you have people left with a lot of time. And then they start to think about other things, and it leads them to quarrels and conflict.

GRGA VUKANCIC (Translated):If the normal, plain people were asked, this evil would never happen. There is an old proverb that says the nationalism and chauvinism are created at the very top and they are implemented in the peasants’ shoes. When a common man and a normal person is driven to situations when there is nothing to eat in the house, it was very easy to manipulate people in the way that they were manipulated.

FRED DE SAM LAZARO:Jakob Finci says another reason Bosnia hasn’t moved forward is that elections, held just a year after the peace accord, kept much of the same leadership in power. Finci is a former corporate lawyer and head of the Jewish Community Federation in Sarajevo.

JAKOB FINCI:The same people are in the same positions, only in the status of peace, instead of the status of war. Officially, the war was ended by the Dayton Peace Accords, but unofficially in the heads of a lot of people, including voters, it was still on. And actually all of them voted for their national parties, for their national leaders who have been the same leaders who lead them during the war.

FRED DE SAM LAZARO:Former British politician Paddy Ashdown is the U.N.’s high representative for Bosnia and Herzegovina, overseeing the country’s transition. He agrees international authorities were too slow to shake up the old order, allowing rampant corruption to take hold.

PADDY ASHDOWN, U.N. High Representative:Item number one is the rule of law. And if you wait weeks, I might even argue hours, before asserting the rule of law, then you pay a terrible price.The scale of the task we now have to do to rid this place of the effects of corruption – it’s at the highest level of politics; it’s in your garage owner who sells you petrol – to fight that, to get that infection out of the bloodstream is a very tough, tall order.

FRED DE SAM LAZARO:And he acknowledges criticism that two of the most notorious leaders in the genocidal war, Serbian General Mladic and Radovan Karadzic, remain at large. Ashdown has made the capture of each a priority, but says it’s a difficult task.

PADDY ASHDOWN:We’re talking about a single man, moving amongst the population who, wrongly, but nevertheless do still regard him as a hero, in one of the wildest mountain vastnesses of the whole of Europe, in which, incidentally, Tito hid 15,000 troops from six German divisions. And you get a scale of the difficulty that it is to catch a single person.

HATIJA MEHMEDOVIC (Translated):This is my oldest son’s notebook. You can see he got an excellent grade.

FRED DE SAM LAZARO:Hatija Mehmedovic belongs to a group called the Women of Srebrenica, which has campaigned for the capture of war criminals. To come to grips with her own loss, she says she most needs to see her husband and sons given a proper burial.

HATIJA MEHMEDOVIC (Translated):If there is a mother that can say that she prays not for daughters-in-law or a grandchild but coffins, I am that mother. I have to see their coffins. I have to see them before I die.

FRED DE SAM LAZARO:Thousands of Bosnians like her are still searching for the remains of their families. It is a tedious process, hampered by Bosnia’s rugged mountainous terrain. Authorities rely mostly on anonymous tips to find mass graves, like this one in a clearing 4,000 feet high near the village of Vlasenica.

SPOKESPERSON:What you see is probably gold and jewelry, and earrings and two bullets.

FRED DE SAM LAZARO:Prosecutor Emin Halilcevic leads an international team of legal, medical and forensic investigators, trying to assemble what they can of an estimated 200 bodies here.

EMIN HALILCEVIC (Translated):From a moral perspective, all these victims deserve to be found. They deserve that their destiny is revealed, and they deserve to be buried in a dignified way. I don’t think this should be a cause for hostility, or a feeling that old wounds are being hurt. On the contrary, I think it can give us all a feeling of calming down, so we can move on to other issues.

FRED DE SAM LAZARO:But it may be a long time before Bosnia is economically independent enough to move on to other issues. And many Bosnians are unwilling to wait. It’s estimated that hundreds of thousands of Bosnians failed to return after the war or have chosen to leave since. In a recent survey, 30 percent of those who have remained say they would leave if they had the chance.

Bosnia is beginning to return to normal after its intense conflict that gave birth to the phrase “ethnic cleansing.” The signs of the war are still present as some of the only construction projects underway repair of churches based on foreign aid and the building of new cemeteries for the dead. There were an estimated 1 million displaced during this conflict but they have slowly been returned to their homes, or what is left of them, largely without incidence. There is still a lot of healing to be done though. Some of the worst war criminals have yet to be found and mass graves are still being excavated.

40%
of Bosnians are unemployed 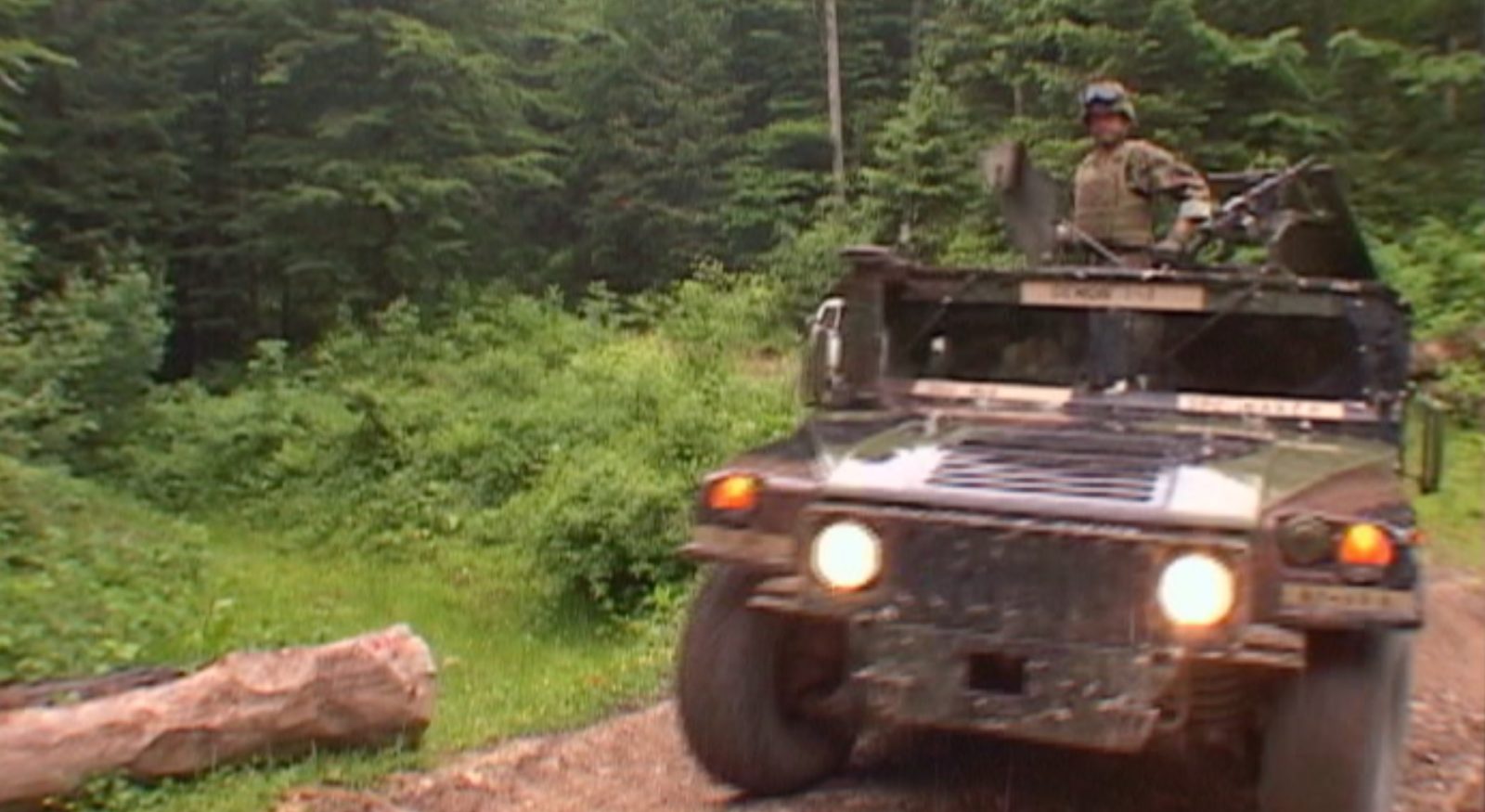 With 13,000 peacekeeping soldiers, including about 1,600 Americans patrolling, international agencies have returned almost one million refugees to their prewar homes.

Many people return to a shell of what their home once was.