Pollution Baptisms in the Jordan

Baptisms in the polluted Jordan river
Subscribe to Stories

FRED DE SAM LAZARO:Tourism is big business in the Holy Land. Millions of Christians comes here for the chance to retrace the footsteps of Christ. Among their most sacred rituals is to be baptized in the Jordan River.

BRUCE STIBINSKI: Being baptized for the first time in the Jordan River, which is where Jesus was baptized, was just awesome. Words cannot explain how I felt.

SARA AUTUNES: I feel very freed. I feel at peace. My heart feels like it’s been opened up. I can’t put it into words.

GIFTY QUAINOO: No words to express why I feel very-I feel very happy and free, free.

DE SAM LAZARO: What few of these tourists know is that unlike their faith, the river itself is in very poor shape. The immersions take place in a two-mile stretch of the Jordan, about the only place now considered safe enough for human contact. For much of the rest of its 140-mile journey, the Jordan has been reduced to a trickle as it meanders through a region riven by war and tension. Gidon Bromberg is with the environmental group Friends of the Earth Middle East.

GIDON BROMBERG (Friends of the Earth Middle East): Due to the conflict, due to the competition between the parties, between Israel, Jordan, Syria, Israel grabs half the water and a little more than a quarter is grabbed by Syria. A a little bit under a quarter is taken by Jordan and the demise is that 98 percent of the historical flow of the Jordan today no longer flows. We’re left with something around 2 percent, and this is not fresh water. This is a mixture of sewerage water, agricultural runoff, saline water. What’s left is this very, very sad sight of a river that is holy to half of humanity.

DE SAM LAZARO:And one that no longer flows into another fabled body of water.

BROMBERG: The Dead Sea is dropping by three feet every year. That’s from my hip down

DE SAM LAZARO: Only the ruins are left of a hotel veranda from where tourists use to stick their toes into the Dead Sea. Today the shoreline has receded more than a half s mile away. From their respective sides, Jordan and Israel further drain the Dead Sea as they mine it for potash, a valuable fertilizer.

DE SAM LAZARO: Israel is a mostly urban nation, but it also has developed a thriving farm sector, and even though it is efficient and recycles 70 percent of its water, agriculture is a huge consumer of water in one of the world’s driest places-one made even more so by several recent years of drought. Nowhere is that more apparent than in Lake Kinneret, the biblical Sea of Galilee, says environmentalist Bromberg.

BROMBERG: I should be completely under water. The Sea of Galilee behind us here should be five meters higher in depth.

DE SAM LAZARO: Even though it is much lower, the lake remains a major source of fresh water for Israel and also to preserve a pristine stretch of the lower river Jordan for the Christian pilgrims.

BROMBERG: In order to keep just a small stretch of some 3 kilometers of the Jordan healthy because of baptism that takes place here and because of needs of agriculture, the water authority has built a dam wall here, and it’s pumping water from the mouth of the river just for a few kilometers.

DE SAM LAZARO: Near the baptismal site, Bromberg’s group recently organized what it calls a “big jump” with Israeli, Jordanian, and Palestinian mayors and other officials, hoping to draw attention to the stresses on the historic river, a cause that they say transcends regional boundaries, even if those boundaries are at the heart of so much conflict.

NADER AL KHATEEB (Friends of the Earth Middle East): We know the Jordan River means a lot, not only for the region. It is for the whole world, for humanity. The Jordan is very important for the three religions. We know what does it mean for the Christianity, the baptism site, and it is a dream of every Christian to be baptized in healthy water, not in polluted water like its nowadays.

DE SAM LAZARO: Even as the big media splash brought hordes of reporters and cameras, the baptisms and the prayers of pilgrims went on undisturbed. Pastor Daniel Santos, who organizes regular trips for congregants of his church outside London, had not heard about the river’s pollution problems, and since this part is not affected he was unconcerned.

PASTOR DANIEL SANTOS: We’re not much in it and now because we came here for a spiritual purpose.

DE SAM LAZARO: So it doesn’t particularly bother you.

SANTOS: Yeah, because we also don’t take much time here.

DE SAM LAZARO: That comes as a relief to tourist operators here, worried that the publicity might drive away business. They point out that Israeli authorities regularly test the water to ensure it’s healthy. Gidon Bromberg says the publicity has led to the construction of sewage treatment plants in Israel and Jordan and greater awareness of the Jordan in parts of the river away from the tourist sites.

Tourism is big business in the Holy Land. Millions of Christians comes here for the chance to retrace the footsteps of Christ. Among their most sacred rituals is to be baptized in the Jordan River.

discussion questions
see more educational resources
Israel is one of the world’s driest places
and made even more so by several recent years of drought. 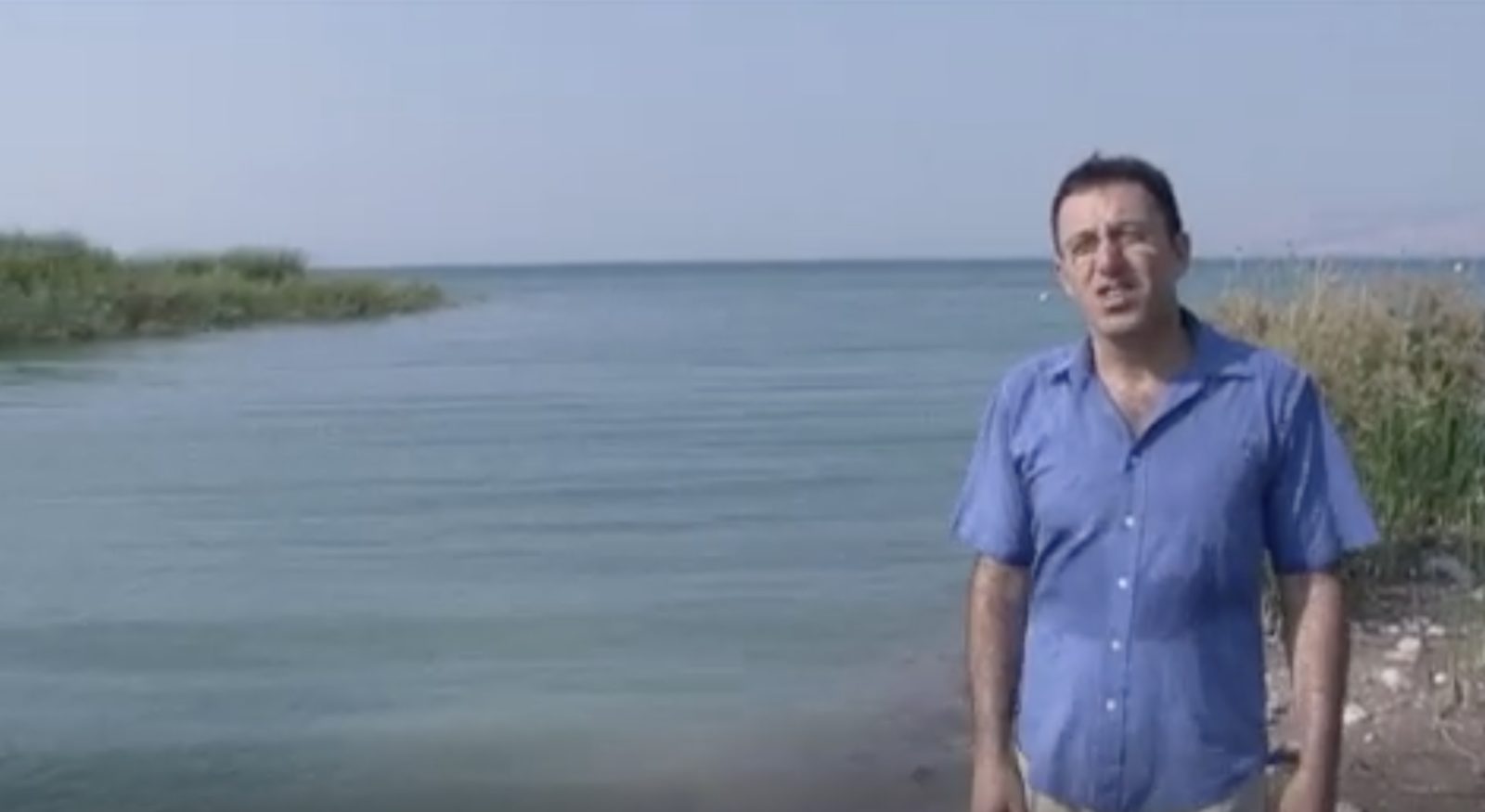 “I should be completely under water. The Sea of Galilee behind us here should be five meters higher in depth.”

70%
of Israel’s water is recycled
Israel is a mostly urban nation, but it also has a thriving farm sector.