Cleaning up the Ganges

Amna Nawaz:The Ganga River, known as the Ganges under British rule, is one of the most reveredwaterways in the world, and also one of the most polluted.It provides water for nearly half-a-billion people, more than any other river in the world, stretching from the foothills of the Himalayas to the Bay of Bengal.Special correspondent Fred de Sam Lazaro reports from Varanasi, India, on the latest efforts to help clean the river.

Fred de Sam Lazaro:In Hinduism, the Ganges, or Ganga, is sacred, a river that has nourished an ancient civilization since its beginning.Today, the Ganges Basin, the river and its tributaries, takes in 11 states, plus the capital region of Delhi. In all, some 400 million people, on farms, in factories and in households, rely on it for life, livelihood and spiritual sustenance.In the holy city of Varanasi, temples draw throngs of believers, who float oil lamps and marigolds.

Pirbhadra Tiwari (through translator):It’s our faith that brings us here. It’s like nectar to me.

Vishwambhar Nath Mishra:Whatever suffering we have, seems to just take away all the suffering.

Fred de Sam Lazaro:So the river can be the source of happiness and contentment.

Fred de Sam Lazaro:Many believers seek to have their ashes sprinkled in the river. Thousands of bodies are burned here. Many, however, are not fully cremated.These practices stress the river, but they are only a small part of what it endures. By far, the most toxic pollution of this river is probably the least visible, unless you happen upon drainage canals like this one, which discharge millions every day of gallons of raw, untreated sewage.Experts link pollution in the Ganga and other rivers to India’s high rate of waterborne illnesses, which kill an estimated 1.5 million children each year. Researchers have also discovered the emergence of so-called superbugs in Ganges water samples, bacteria resistant to most commonly used antibiotics.Prime Minister Narendra Modi, devoutly Hindu and allied with Hindu nationalist groups, represents Varanasi in Parliament and has made the river’s cleanup a signature issue for his government. In this video posted online by his office, Modi vows to jump-start the effort, which has languished for decades.The $3 billion dollar cleanup program began in 2015, but Mishra, citing the continued pollution, among other things, says it’s shown little progress.

Vishwambhar Nath Mishra:Now, I think red tape-ism is the biggest cause for it.

Fred de Sam Lazaro:Pollution control officials in Varanasi say new capacity is coming online that will treat much of the daily effluent.But Rajiv Mishra, who heads the prime minister’s national clean Ganga project, says there is no quick solution.

Rajiv Ranjan Mishra:It’s a very long-term thing. People always think, like, when it will be clean? I mean, that question has no meaning.

Fred de Sam Lazaro:He say it will take years to bring together the competing interests and jurisdictions across an area one-and-a-half times the size of Texas.And while the public supports a cleanup, Mishra says many don’t perceive a grave threat to a river that they feel can withstand anything.

Rajiv Ranjan Mishra:People will say, there can be some dirty things in the river, there may be some pollution, but the river remains pure. So that’s a strength, as well as a challenge, for us.

Fred de Sam Lazaro:He says there needs to be a shift in perception and even in some rituals. Electric crematoria have been built as an alternative to the traditional and less efficient wood-burning pyres.And there also are smaller campaigns another to raise public awareness, like one effort which recycles flowers. Directly or indirectly, tons of these chemically treated flowers find their way into the river. They are now turned into incense sticks, which are sold near the temples.However, the most effective way to cleanse the river — also the biggest challenge — would be to restore its natural flow. After dams, industrial and agricultural use, Mishra says there’s a lot less water left for cities like Varanasi.

Rajiv Ranjan Mishra:Imagine a person, if you take out 70 percent, 50 percent of the blood from someone’s body, what will happen to it?

Fred de Sam Lazaro:Restoring the river’s natural flow will require sacrifice from all users, Mishra says. It’s a political challenge that will become even more difficult given climate change.Himalayan glaciers that feed this region’s major rivers are receding. Rainy seasons are getting shorter and dry spells longer.For now, Arunabha Ghosh, who heads a Delhi-based think tank, gives the government’s effort a low grade.

Arunabha Ghosh:You have a financing problem. You have a manpower problem. And, most importantly, I would say, you still have a governance architecture problem.And if we don’t fix those basic things, then you won’t be able to truly transform, because the idea was, if you can fix this, you know, which — because what happens to the Ganga has a kind of also social resonance.

Fred de Sam Lazaro:For now, many eyes are on Varanasi, from the prime minister to the canoeing balladeer who shuttles tourists along the Ganga. She is sacred, he sings. Stop throwing trash into her.For the “PBS NewsHour,” this is Fred de Sam Lazaro in Varanasi, India.

from the foothills of the Himalayas to the Bay of Bengal

Some 400 million people, on farms, in factories and in households, rely on the Ganges for life, livelihood and spiritual sustenance.

discussion questions
see more educational resources here
In the holy city of Varanasi,
temples draw throngs of believers, who float oil lamps and marigolds.
But along with ritual offerings, millions of gallons of raw, untreated sewage enter the river every day.

“People will say, there can be some dirty things in the river, there may be some pollution, but the river remains pure. So that’s a strength, as well as a challenge, for us.”

Rajiv Ranjan Mishra, head of the prime minister’s national clean Ganga project
While the public supports a cleanup,
Mishra says many don’t perceive a grave threat to a river that they feel can withstand anything. 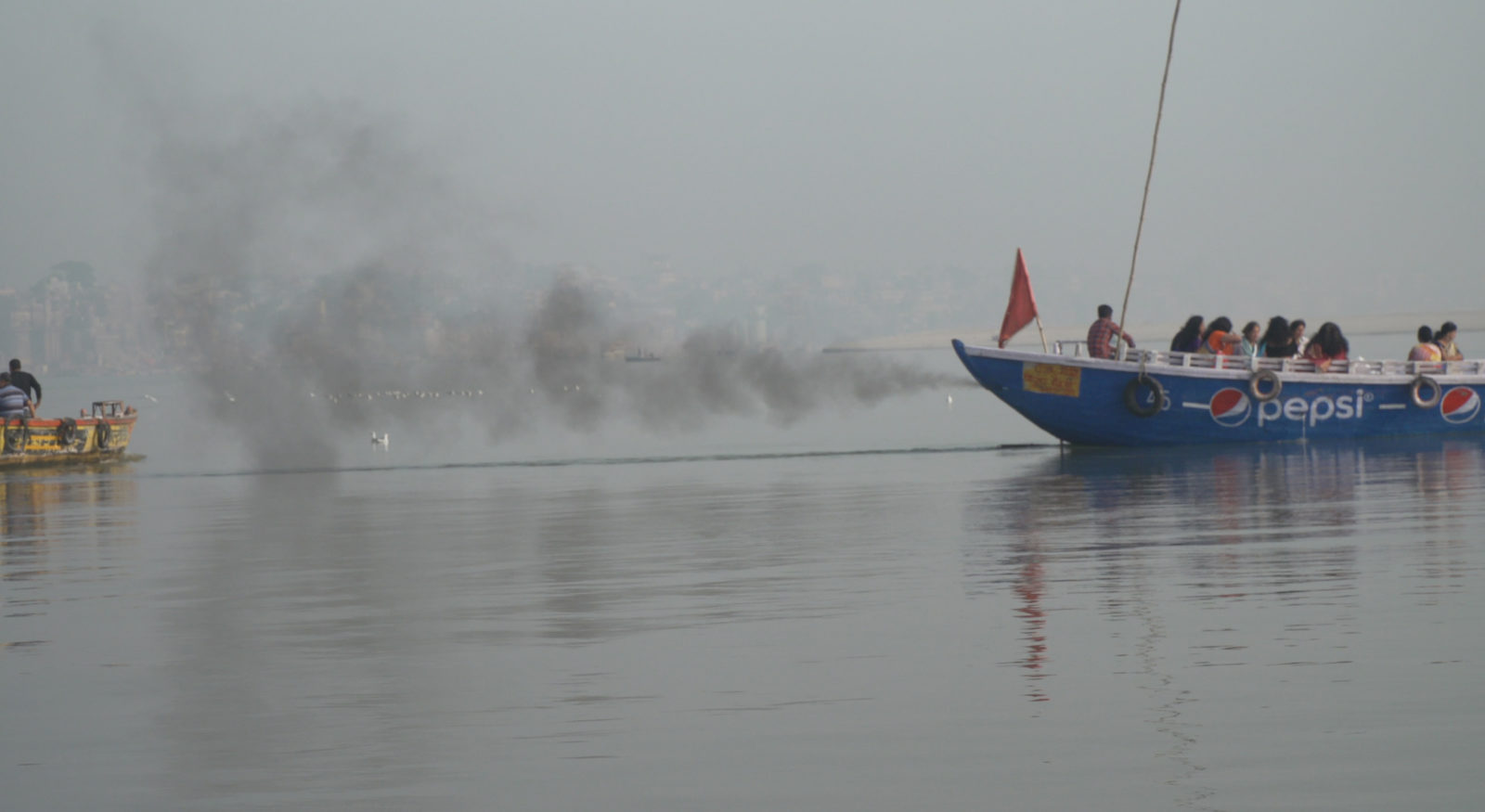 A $3 billion dollar cleanup began in 2015, but has shown little progress.