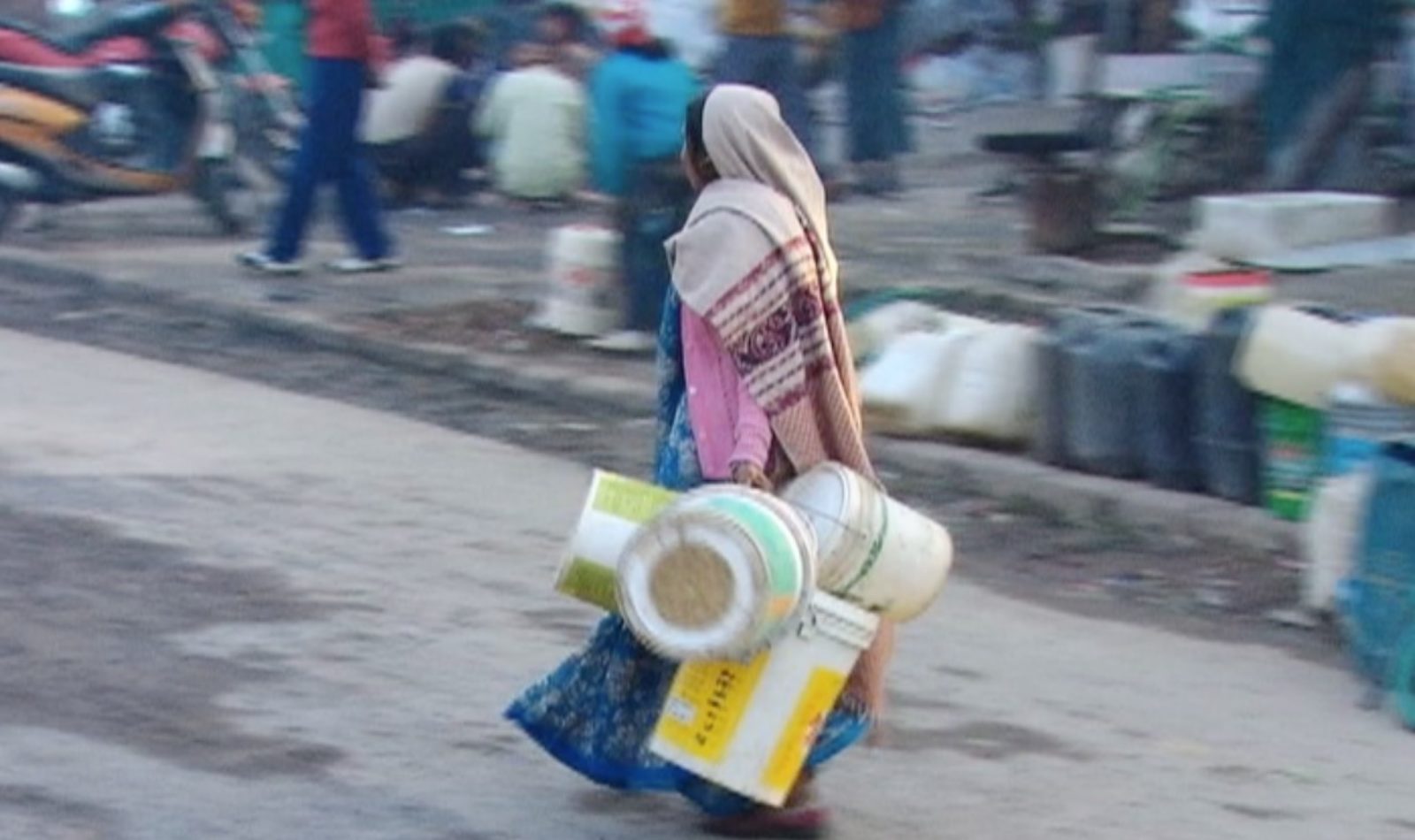 Each day, some women spend up to four hours waiting for waiting for the only source of water for their daily consumption and for sanitation. There are no working toilets here.
Play Story
Subscribe to Stories

RAY SUAREZ: Now, we begin a yearlong partnership with “National Geographic” magazine, which will be reporting on population issues throughout 2011. Tonight: the looming crisis of water scarcity in India.Special correspondent Fred de Sam Lazaro reports from the Indian capital of New Delhi.

FRED DE SAM LAZARO: To really know what it’s like to live in an overpopulated place, watch the daily vigil for the municipal water tanker truck here in Delhi’s Vasant Kunj or thousands of similar neighborhoods across urban India.

FRED DE SAM LAZARO: Chanda (ph) lives in an illegal settlement here in this city of 16 million and growing. On this day, she left her job as a daily laborer mid-morning, hoping to run back and collect some water. Anxious to return to work, she kept checking on the tanker’s arrival time.

FRED DE SAM LAZARO: Exactly when the truck arrives is anyone’s guess. Every day, these women say they spend four hours — their children often miss school — just waiting for the only source of water for their daily consumption and for sanitation. There are no working toilets here.

WOMAN (through translator): We have to go out in the open. There’s a forested area across the street. It’s really humiliating. There are men sitting around there, and the women are afraid to go there. We go in groups.

JYOTI SHARMA: Seven hundred thousand people, yes.A majority of this growth is of people who are poor. And they typically come and settle in these kind of settlements. Only 27 percent of the city is actually a planned city. The rest of it has just grown like this. And you cannot stop them from coming, because that’s the only place they will get some livelihood from.

FRED DE SAM LAZARO: Sharma lives in a middle-class enclave behind a wall, but right across the street from the slum. When it comes to water supply, they’re better off here, but hardly well-off.

JYOTI SHARMA: We get water 45 minutes in the morning, and that’s it.

JYOTI SHARMA: Yes. That’s it. So, in 45 minutes, you stock up on however much water you can. But these are all pipelines laid by the people themselves.And these pipelines then go to online motors. So, when they were — they know the time when the water is released into the pipeline system. So, at that time, people switch on these motors. And these motors suck water from the pipelines into these storage tanks. And, then, some time during the day, they have another motor which pumps this up to the…

JYOTI SHARMA: … rooftop. And from there, they get their own supply of water whenever they want.

FRED DE SAM LAZARO: It’s an elaborate, expensive system to work around the anemic municipal water supply. And, ironically, the water they get may well be unsafe.

JYOTI SHARMA:The motors, they actually create a suction vacuum. So, if there is no water in the pipeline, that — any crack in the pipe will allow sewage or dirty water to get into the pipelines. And that actually becomes a big problem, a cause for diseases here.

FRED DE SAM LAZARO: In her own kitchen, Sharma has a filtration system and, like other middle-class Indians, she can buy her way to a secure water supply.Across the street, meanwhile, residents had to wait until the next day for the next water tanker. Sharma says Delhi’s water situation is ripe for conflict.

JYOTI SHARMA: Now, the day this tanker stops coming, I’m sure that, just to feed their children, they will come there, and they will break into water tanks. And neither from the security point of view, nor from the humanity point of view, we won’t be able to stop them.So, if the water wars happen, they will happen in places like this. Populations are dense. Resources are dwindling. Aspirations are high. This is where the conflict will happen.

FRED DE SAM LAZARO: To make matters worse, groundwater supplies are also dwindling. The city pipes freshwater in from dams as far as away as 200 miles. It’s simply unsustainable, given not just population, but also economic growth in India, says Ashok Jaitly, a scholar at the Environmental Research Institute in Delhi.

ASHOK JAITLY, Environmental Research Institute: It’s not just the pressure of numbers. As you have a rate of growth of 8 percent, 9 percent, 10 percent, your lifestyle changes. Your diet is different. You have showers and swimming pools and all that sort of thing, you know?So, the whole lifestyle changes. And that results in increased per capita consumption of water. That also needs to be attended to.

FRED DE SAM LAZARO: However, he says there’s been little enthusiasm for addressing water issues or for passing overall water policies. He says it’s particularly true of India’s agriculture sector, which consumes 80 percent of the country’s freshwater supply. Half of it goes to waste.The water table is declining rapidly in the breadbasket state of Punjab, for example, severely imperiling underground aquifers and, ultimately, food production itself.For Punjab’s farmers, the water flows freely, and it flows for free. Submersible pumps are subsidized by the government, which also provides electricity and water at no charge to farmers, giving them virtually no incentive to conserve.

ASHOK JAITLY: And the farmer lobby is very powerful and — electorally, in India. And, therefore, you have the politics of populism, which encourages inefficient water management and inefficient water utilization. It’s a very emotive and political issue.

FRED DE SAM LAZARO: So is the issue of population control, even though fewer people would seem like a solution to dwindling resources.To begin, Ashish Bose says, economics determine family size, especially in poor families, where children are a sort of retirement plan.

ASHISH BOSE, Population Research Center, India: In India, we don’t have Social Security for all elderly people. So, only they have to rely on children.

FRED DE SAM LAZARO: Bose, who is one of India’s leading demographers, says the government of Indira Gandhi launched family planning programs in the 1970s that were widely perceived as coercive, leading to her government’s defeat at the ballot box.It was a huge setback to any concerted government family planning program. And, yet, even as the growing population makes life harder and harder, Bose says the problem is rarely tackled head on.

ASHISH BOSE: They concede that there are too many people, and that is why we are suffering, that, everywhere you go, there is a long queue. If you go to a free health, for example, if you have an emergency, and then say, you come after three days, because there are so many other people in line.

ASHISH BOSE: You know, in one of my lectures, I have said that development is the best contraceptive. I still believe so.

FRED DE SAM LAZARO: In fact, India has one of the world’s fastest rates of development, and family sizes are declining. The population is projected to stabilize by about 2050, but, by then, India will be the world’s most populous nation, at 1.6 billion.

RAY SUAREZ: Fred’s report was a partnership with the Pulitzer Center on Crisis Reporting and the Under-Told Stories Project at Saint Mary’s University in Minnesota.

27%
of New Delhi is actually planned instead of informal settlements
16 million people live in New Delhi
and 500,000 to 700,000 people are added each year. 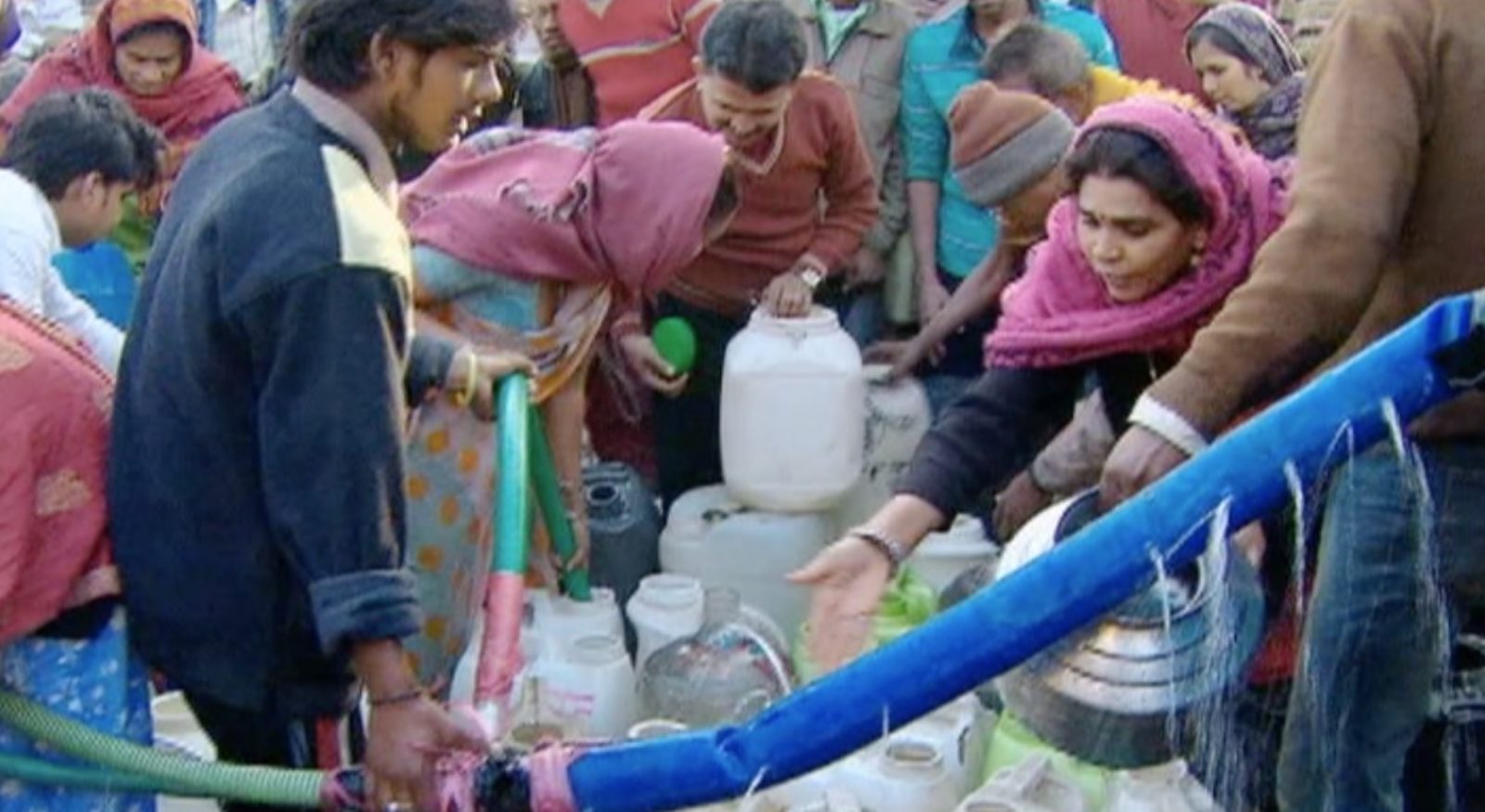 To make matters worse, groundwater supplies are also dwindling. The city pipes freshwater in from dams as far as away as 200 miles.

80%
of the country’s freshwater supply goes to agriculture 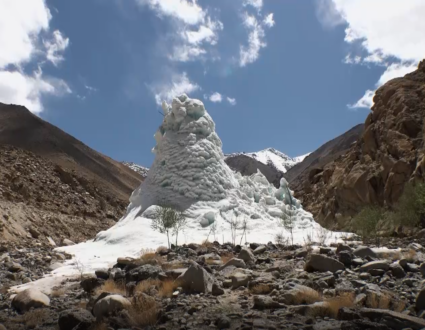 Baby Glaciers in the Himalayas 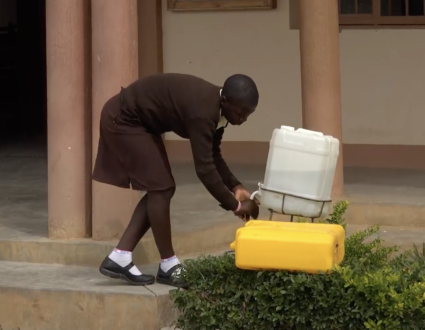 A Water Exchange Between Schools Across the World 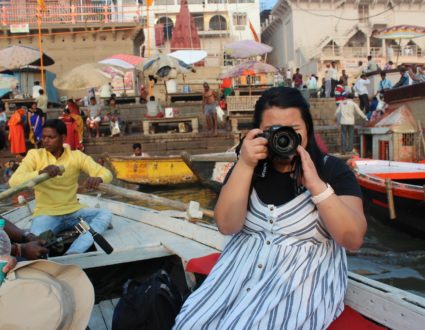 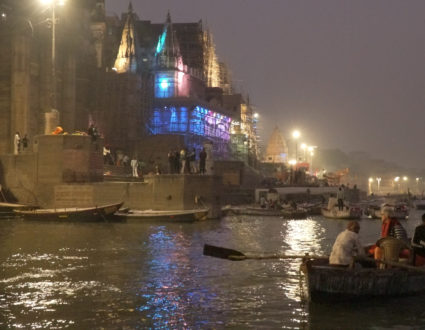 Cleaning up the Ganges 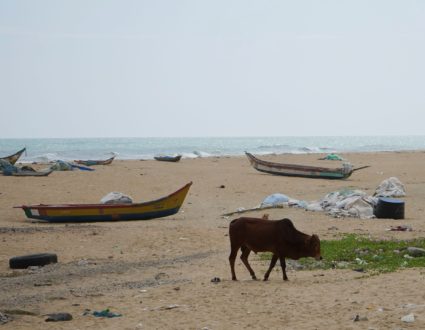 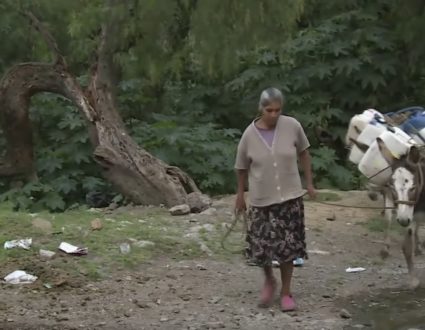 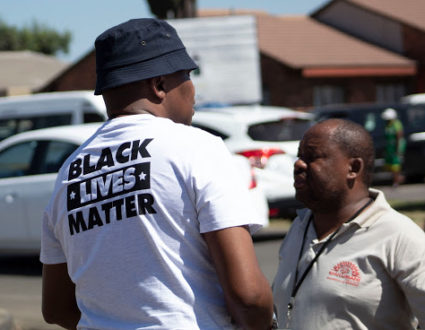 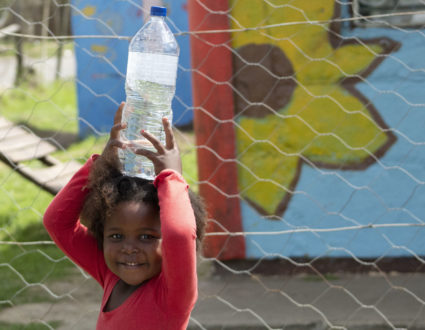 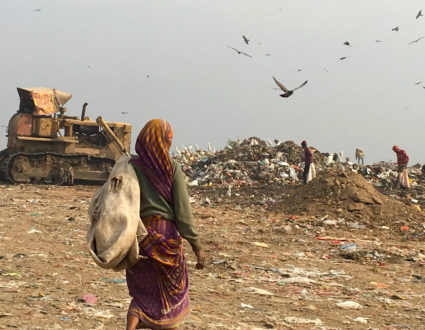 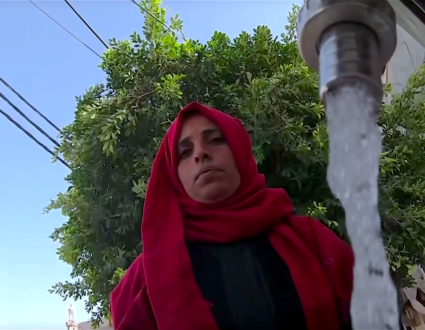 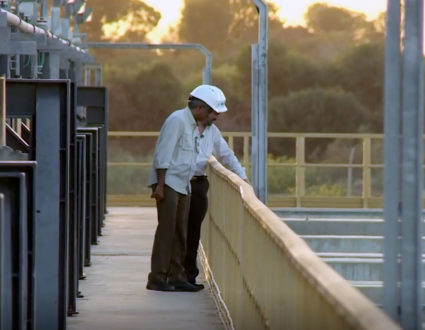 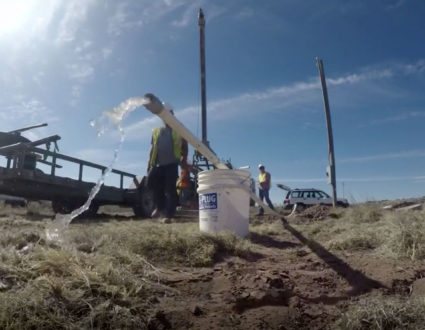 How off-grid residents are getting running water 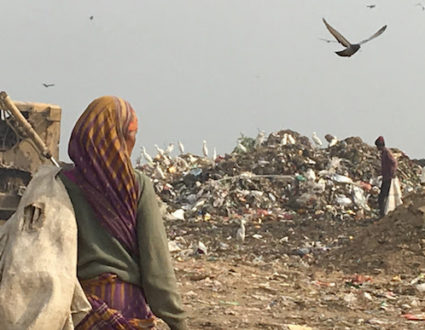 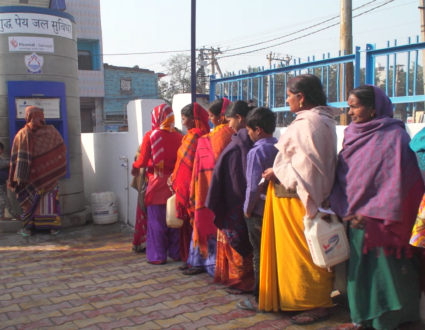 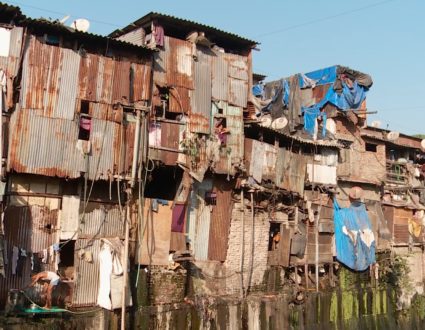 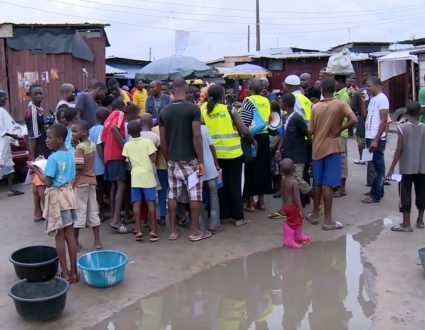 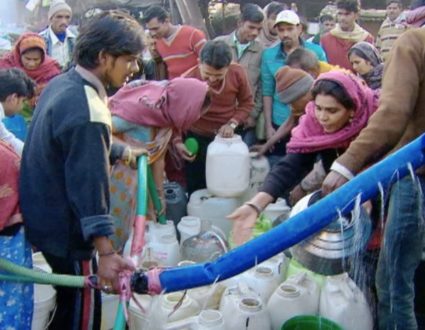 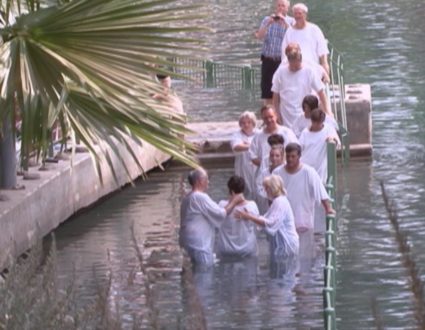 Pollution Baptisms in the Jordan 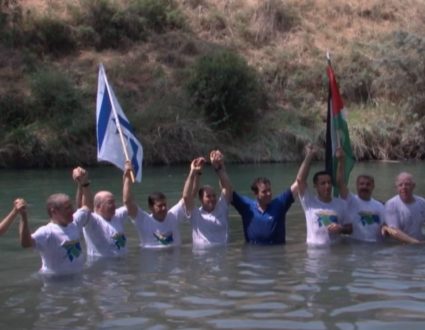 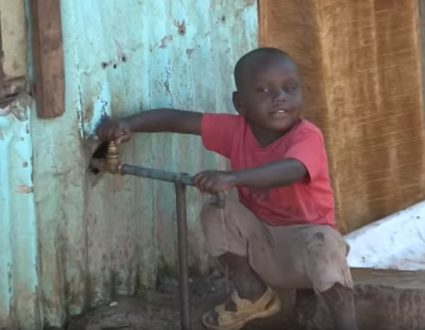 A New Kind of Capitalism 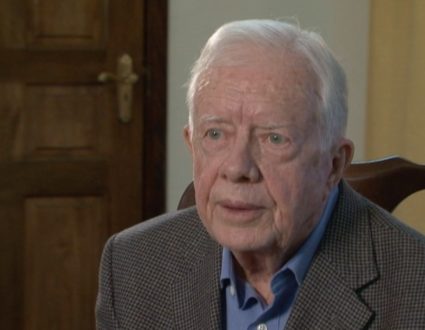 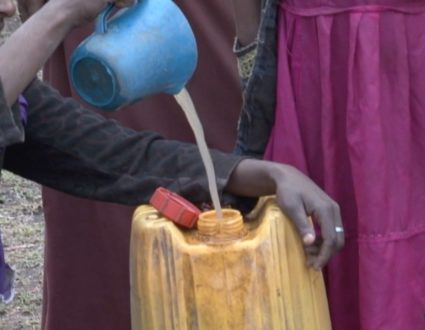 Clean Water is Never a Given 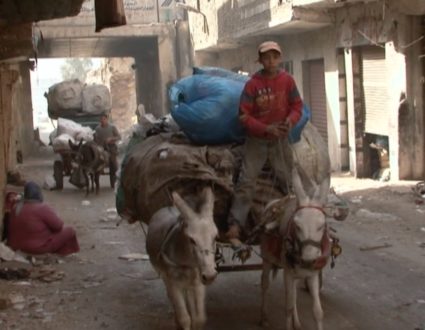 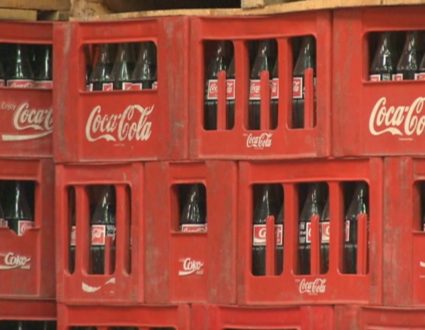 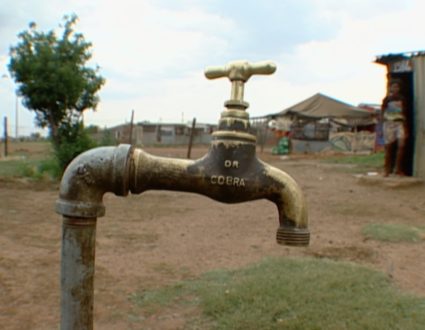