Judy Woodruff:One-fifth of the world’s population lives without enough water. And, in India, half of the population, some 600 million people, reside in areas where water resources are highly stressed.Special correspondent Fred de Sam Lazaro reports from the coastal city of Chennai on the balancing act between rapid economic development and water management.

Fred de Sam Lazaro:In Chennai’s poorer neighborhoods, like Ayanavaram, people drop whatever they’re doing when they hear the water tanker squeezing into the narrow alley.It is their only source of clean drinking water, and it comes every other day.

Surya Kala (through translator):The tap water we get stinks of sewage. This water is much better. We depend on the water tanker.

Fred de Sam Lazaro:They don’t get a lot, just a couple of pots per household, which are saved just for drinking and cooking. Arduous and back-breaking as fetching water seems, these are good times compared to what people have endured in recent years.

Surya Kala (through translator):Now the supply is good.

Fred de Sam Lazaro:Last June, toward the end of an epic drought, this coastal city of more than eight million residents ran out of water. Drinking water was rationed, and at one point even brought in by on trains from 135 miles away.

T. Prabhushankar:Such disasters which we go through actually serve as a catalyst for us to quicken our pace, but then this process has always been ongoing.

Amir Basha:Desalination plants are acting as a backbone to give a s teady supply and reliable supply of water. Seawater is abundantly available.

S. Janakarajan:We are not in the Middle East. There’s so much of rainfall, desalination is extremely irrational.

Fred de Sam Lazaro:Chennai on average gets 55 inches a year, far more rain than Seattle or London. One big difference, he says, is there’s been rapid population growth here.In recent years, Chennai has become a center for car manufacturing and for information technology. That’s drawn millions of high-tech workers, factory workers and migrants from surrounding rural areas.And all of that has dramatically increased the demand for water, while at the same time reducing the supply of it. Ironically, all the new housing has left residents cut off from access to freshwater. Builders paved over hundreds of acres of wetlands, natural reservoirs and drains that replenished aquifers below.When the monsoon is heavy — and extremes have become more common in a hotter world — the water has nowhere to drain.

Fred de Sam Lazaro:Nityanand Jayaraman, an environmental activist, took us on a tour to see the impact of encroachment and development.So this used to be a rice field.

Nityanand Jayaraman:This used to be rice fields.And in order to construct here, the ground water level is very, very high. So to build your foundation for these large buildings, you need to you know, dig (INAUDIBLE) and then suck out the groundwater and pump it out. So, you’re actually just throwing away your future.

Fred de Sam Lazaro:Trading water for land and building has been happening since the 1600s, when the British East India Company created the city of Madras, present-day Chennai.In those days, thousands of lakes and tanks dotted the landscape, serving small agrarian communities around them.

Nityanand Jayaraman:So, virtually every one of these blue patches that you see are human-made engineered irrigation tanks that they date back to more than 1,000 years,

Fred de Sam Lazaro:Steadily, these tanks were built over or encroached or abandoned in a world where Jayaraman says land was highly valued, a trend that’s been particularly intense over the past two decades.

Nityanand Jayaraman:Under modern economic parlance, be it in India or in Houston, Texas, what development means is constructing more buildings, paving more open earth with hard concrete or asphalt.

Fred de Sam Lazaro:For their part, residents in these new developments have their own complaints.

Harsha Koda:We pay our taxes, but we don’t get the services that the municipality is supposed to give us.

Fred de Sam Lazaro:Harsha and Prabha Koda have been waiting for a decade to get their 50-unit apartment complex hooked up to the city’s water and sewer system.

Harsha Koda:It’s been 10 years since the plans were passed, and still no infrastructure.

Fred de Sam Lazaro:They rely on private water tankers. When Prabha Koda saw one arrive during a downpour, she was moved to action.

Prabha Koda:That’s when the idea struck me. Like, let’s just get the rainwater collected and use it.

Fred de Sam Lazaro:The Kodas convinced their association and dozens of other such complexes to build a simple system of pipes and storage.

Harsha Koda:We have been going around preaching this like evangelists.

Fred de Sam Lazaro:What has is it done to water costs and your water security?

Harsha Koda:When it rains, we don’t buy tankers. We just built the well bought six months ago.In a year’s time, I would see at least 50 to 70 percent of our water being made by ourselves, not from outside.

Fred de Sam Lazaro:Rainwater collection has actually been mandated by law in Chennai since 2003, but compliance and enforcement are minimal.Several powerful interests benefit from water shortages, everyone from private water tanker operators to contractors for multibillion-dollar projects like desalination plants.Shanta Nair is a retired head of Chennai’s water utility, where she says there’s a definite bias for big projects.

Shanta Sheela Nair:You lay pipes, and you bring water from across, you desalinate, or you build huge dams and reservoirs, you don’t do small things like water harvesting.So this message is not going from the professionals to the political, to the heads also.

T. Prabhushankar:That is sort of an oversimplification that just harnessing the rainfall alone will solve the needs of the city.

Fred de Sam Lazaro:The water authority’s Prabhushankar says, it won’t. He says more sewage water recycling plants and the expanded desalination are an insurance policy that will shield Chennai, once and for all, from its water insecurity.Can you say with some confidence that, going forward, you will never have a problem?

T. Prabhushankar:Absolutely. When I say the timeline 2024-’25, this will certainly be a thing of the past.

Fred de Sam Lazaro:The Kodas, already waiting a decade for a utility hookup, say that’s just one more promise.Those less well-off may well continue to lurch from day to day, water tanker to water tanker, for this most basic of human needs.For the “PBS NewsHour,” this is Fred de Sam Lazaro in Chennai, India.

Half the population of India lives in areas where water resources are highly stressed.

Last June, toward the end of an epic drought, more than eight million Chennai residents ran out of water. Drinking water was rationed, and at one point even brought in by on trains from 135 miles away.

The city has built two desalination plants on the Bay of Bengal in recent years and two more are scheduled to come.

But some call desalination irrational in a city with plenty of rain.
Chennai gets an average of 55 inches of rain a year,
more than Seattle or London.
Point of View

“Desalination plants are acting as a backbone to give a steady supply and reliable supply of water. Seawater is abundantly available.”

“We are not in the Middle East. There’s so much of rainfall, desalination is extremely irrational.” 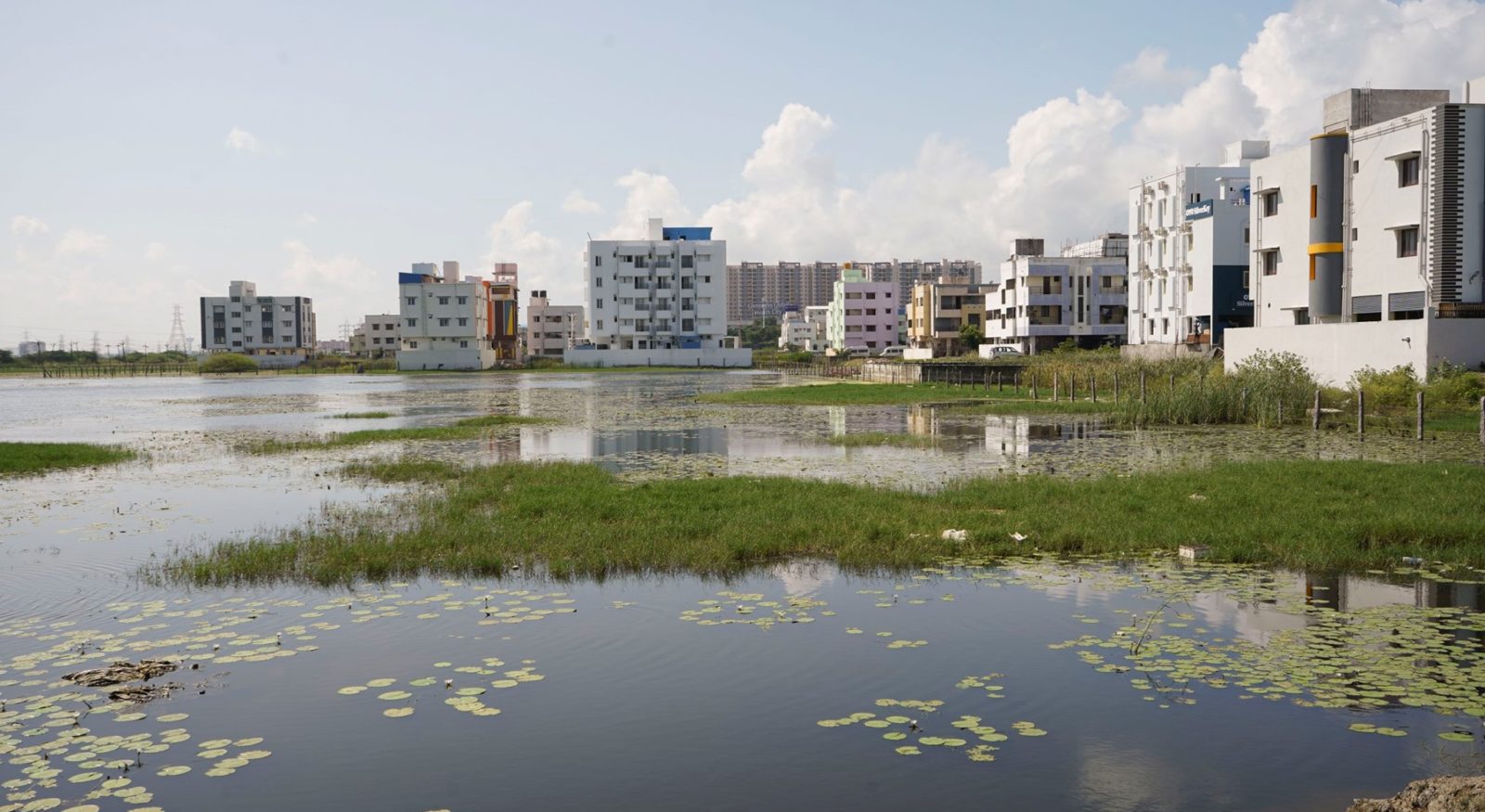 Wetlands like the one pictured here are giving way to housing and new buildings.

Most residents are forced to rely on water deliveries by truck.
Another solution
Some residents, like Prabha and Harsha Koda, are taking matters into their own hands and developing rainwater collection systems.

“In a year’s time, I would see at least 50 to 70 percent of our water being made by ourselves, not from outside.”