It’s been 25 years since the nation of South Africa dismantled apartheid.

While there has been political progress since, the young democracy has also faced many setbacks, most recently with failing infrastructure. Rolling blackouts and water use restrictions have become part of daily life.

It’s hard to escape the spectacular views, the iconic table mountain, beaches, even penguins that put Cape Town atop so many travel bucket lists.

It’s also hard to imagine, but, last year, this city of 3.7 million was brought to its knees by an epic drought, one that dominated news headlines for months.

Our dam levels are sitting at 25.5 percent at this stage,

Officials placed strict consumption limits and even predicted a so-called day zero, when the taps would run completely dry.

And day zero is predicted for the 11th of May.

In the end, the day dreaded didn’t arrive, thanks to some rainfall and also because consumers overall cut their water use by 60 percent.

So, the first catch of water, which is cold, that’s coming out of the shower goes into a separate bucket.

Vanessa Burch showed me how carefully every drop is conserved, beginning in the bathroom.

All the shower water that we trap in the shower drain, the bucket there, is used to run the toilet.

At the height of the 2017-’18 drought period, we were in fact completely independent of water.

It’s efficient, but also expensive to install, and well out of reach of most Cape Town residents, especially the 20 percent who live in neighborhoods like Langa, unincorporated settlements that are a legacy of apartheid, or official racial separation.

There’s no running water in homes here. A single communal tap might serve several dozen families. Still, conditions are better than last year, when some of these taps would come on for only limited hours. And it is far better here than many other parts of South Africa.

Five hundred miles away, in Makhanda, population 70,000, some taps have already run dry. Residents like Noxolo Saki wait in line for hours for a two-day supply of drinking water.

So what have you been doing to cope?

Just how terrible? Across South Africa, that largely depends on where you live.

Here, amid tin shack-like homes, two water taps serve about 300 residents. Water was running the day we visited, and Selina Pikes seized the opportunity to wash her family’s clothes.

Some days, maybe there can be not water a week.

For a week, no water?

For a week, no water.

To get a sense of the magnitude of the water crisis in Makhanda, we visited the settlers dam.

There’s a sign here that warns boaters to go slow, but as you can also see, the shoreline has receded several hundred yards, and this reservoir is at 7 percent of its capacity.

To many experts, Makhanda is a microcosm of a much larger water crisis. Besides climate change and the continuing two-year drought, they blame aging, poorly maintained infrastructure for creating the perfect storm.

No one is exempt, not even the upscale sections, home to several elite private schools, and Rhodes University.

What do people not take for granted anymore that they once did?

Jane Tanner, a hydrologist at Rhodes, says such measures can only go so far, and that major structural changes to the water supply system are needed.

Previously under apartheid, our water supply scheme very much targeted the white population, and there were people that were not accounted for. But it hasn’t been kept up and added to, and that’s where we’re at, at the moment.

Mzukisi Mpahlwa, Makhanda’s first black mayor, says the city is committed to improving its water infrastructure and merging its segregated systems into one that serves all residents.

As officials scramble to meet the emergency in Makhanda, a South African Islamic charity called Gift of the Givers offered its help, distributing bottled water as a first step.

The group is also located and drilled bore holes, or deep-water wells.

Gideon Groenewald led the effort. With GPS guidance, a magnetometer and, he says, faith in God, Groenewald drilled 15 wells. It’s a precision job to find cracks in the bedrock that lead to the aquifer below.

It’s just more than an inch, and you have to hit it. If you miss it, you get maybe 1,000 liters an hour, which is not going to solve your problem. We want to get at least 10,000 liters an hour to make it viable.

Once the water is tested, Groenewald connected it to a filtration system and a community tap. Mayor Mpahlwa was along, as one tap in the Joza neighborhood was inaugurated.

Makhanda will soon replace bottled water with these taps, but groundwater is not a sustainable solution.

By the time the drought finishes, I think those aquifers are going to be seriously depleted.

And, she says, Makhanda may be a proverbial canary in the coal mine.

We’re a small town. We can, in a way, cope. Translate that to a large city, one of the large African cities, and you really have a nightmare situation.

Cape Town barely escaped it, she says, but with growing populations and climate patterns of longer, more frequent droughts, even the continent’s most modern city will likely face the renewed threat of a day zero for many years to come.

Inequality and a Drought

It’s been 25 years since South Africa dismantled apartheid, and while political progress has occurred, the young democracy continues to face hurdles. In recent years, extreme drought pushed the country to the brink of disaster, and although rainfall finally mitigated the situation, persistent water shortages are now a part of daily life. Special correspondent Fred de Sam Lazaro reports. 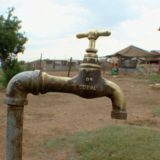 Where the Taps Run Dry

In Makhanda, population 70,000, residents must wait in line for hours for a two-day supply of drinking water.

Infrastructure Failure
“Previously under apartheid, our water supply scheme very much targeted the white population, and there were people that were not accounted for. But it hasn’t been kept up and added to, and that’s where we’re at, at the moment.” How one home is fortunate enough to be water independent

How have things changeD?

Take a look back at our story on the state of water access in South Africa in 2004.