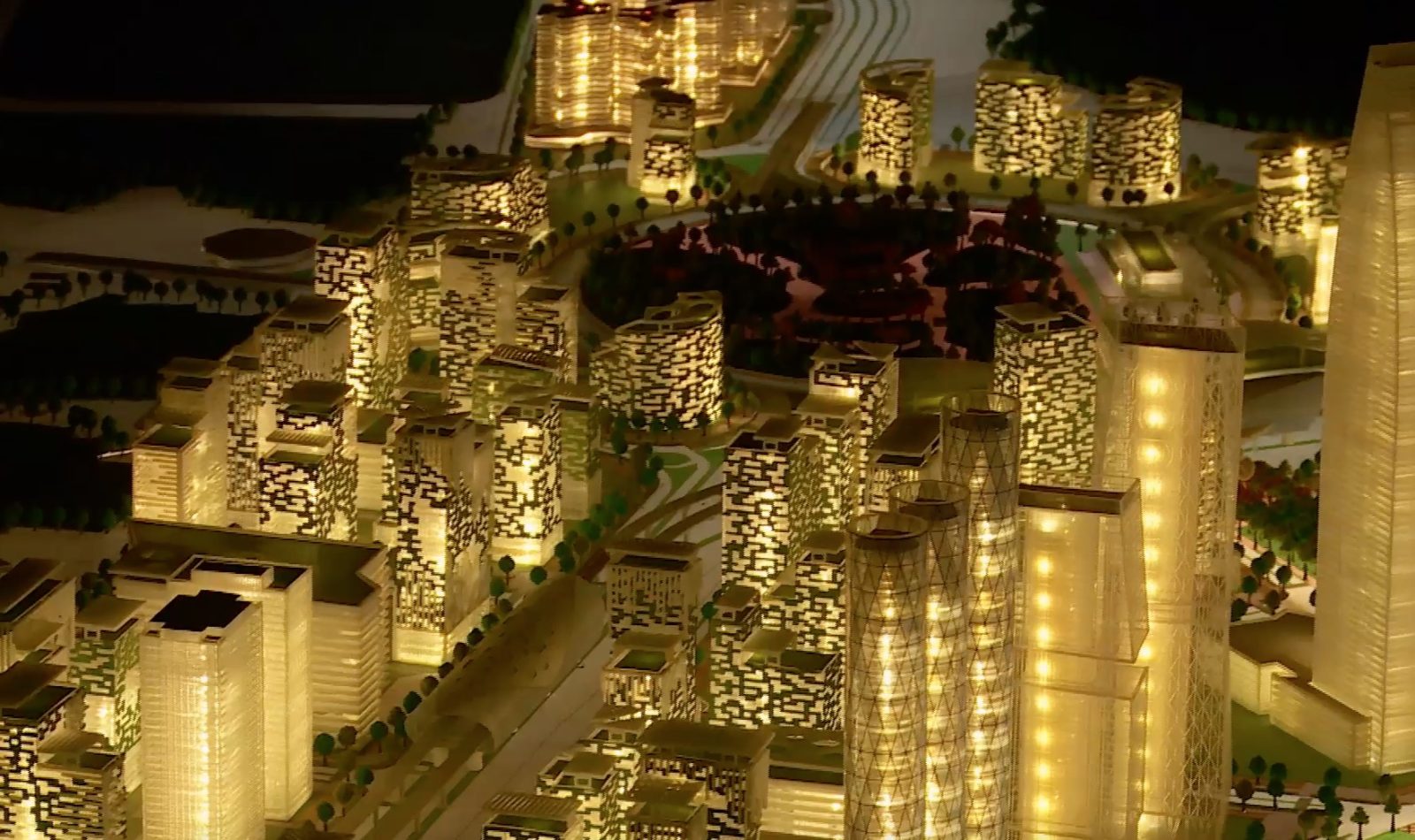 FRED DE SAM LAZARO:Gujarat was the home of Mahatma Gandhi. Thousands come to pay homage — the ordinary and the famous. This video is from the YouTube channel of India’s new leader as he hosted China’s president at Gandhi’s ashram.Narendra Modi invokes the father of modern India, who preached non-violence and simple living. But Modi’s vision seems in many ways more like modern China.So this is sort of Shanghai-inspired?

FRED DE SAM LAZARO:This is the scale model of an all new city being built in Gujarat from scratch. It was championed by Modi when he headed the state government here.So this is what we’ll come back to in about a decade?

FRED DE SAM LAZARO:Ramakant Jha who heads a agency set up to develop it says in a decade 500,000 people will work in the new city. He says it will keep in the country some $50 billion that now goes elsewhere because India lacks such facilities.

RAMAKANT JHA:All this Indian business are being performed in other countries: Singapore, Dubai, London.

FRED DE SAM LAZARO:The multinational finance and insurance firms will come to Gujarat, he predicts, as many manufacturers have in recent years.The Japanese company Hitachi is one. Hitachi’s Vinay Chauhan says it’s tedious to do business in India with myriad permits and corruption. But not so in Gujarat, he says, where Modi cut red tape and improved the infrastructure.

VINAY CHAUHAN:One of the most important is power. We have uninterrupted power. These governments talk but don’t do. In Gujarat nobody talks, it is just done.

FRED DE SAM LAZARO:Under Modi’s leadership, Gujarat made land available for factories and redevelopment. One showcased project is Riverfront Park in Gujarat’s largest city, Ahmedabad. Luxury high rise homes are soon to follow.But not everyone is pleased with Modi’s approach. Critics say it favors big business at the expense of the poor, including thousands who once lived in this gentrified area.The families living in this decrepit industrial location say they lived for years along the riverfront when all of a sudden they were abruptly displaced and moved here, given tiny plots of land and nothing more to restart their lives.

FRED DE SAM LAZARO:We are just day laborers, said this man. The city — at least an hour’s bus ride away — is where the work is, they said. But bus fare now takes half of their meager earnings; around three dollars a day.

MAN:We’re right by a garbage dump and when it rains this place floods and the water brings it all in.

WOMAN:The water is bad, we have to walk really far to latrines. We have a lot of difficulties. We’re forced to live like animals.

SHABNAM HASHMI:Modi is a very good show man. He knows how to project things. But that is about all.

FRED DE SAM LAZARO:Shabnam Hashmi founded a human rights group that advocates for marginalized communities. Hashmi says Gujarat is near the bottom among India’s states in education and health care. And poverty actually grew during Modi’s 13 years at the helm, she says.

SHABNAM HASHMI:The Gujarat model helped middle classes, and Gujarat model cared a damn about the poor, about the marginalized sections, and it is going to be the same all over India.

FRED DE SAM LAZARO:Other politicians may be criticized for favoring the wealthy over the poor. But in Modi’s case, there’s also a sectarian dimension. He’s long been dogged by accusations he did little to stop programs against Gujarat’s impoverished Muslim minority back in 2002 — allegations that led the U.S. and U.K. to ban him from entering those countries.Inquiries later cleared Modi but he’s still hurt by long ties to Hindu nationalist groups — some with violent pasts — who want India officially declared a Hindu nation.Modi’s election has emboldened the extremists, says Hashmi, who belongs to India’s 14 percent Muslim minority.

SHABNAM HASHMI:In the last six months, there have been more than 600 communal riots in this country.

FRED DE SAM LAZARO:This is between what, Hindus and Muslims?

SHABNAM HASHMI:Yes. And I don’t know how long somebody like me should feel safe sitting in this home, frankly.

SHABNAM HASHMI:That means that I have a Muslim name.

FRED DE SAM LAZARO:Supporters of the new prime minister say such fears are exaggerated. They say Modi has spoken out against extremist rhetoric and activity.

M.J. AKBAR, RULING PARTY SPOKESMAN:He said it in the House of Parliament, this is unacceptable. This can’t go on. We want development for all.

FRED DE SAM LAZARO:M.J. Akbar, a columnist and author and himself Muslim, is a spokesman for Modi’s Bharatiya Janata party.

M.J. AKBAR, RULING PARTY SPOKESMAN:He has said repeatedly, “I said, I want to see Muslims in India with the Quran in one hand, their holy book, but with the computer in the other hand.”Now that is true empowerment. Jobs are true empowerment.

FRED DE SAM LAZARO:As for the Gujarat model, Akbar says, Modi inherited the challenges that underlie its poverty. He says the verdict on his tenure come from his election three times in the state.

M.J. AKBAR, RULING PARTY SPOKESMAN:We are a democracy. People will vote only if their lives have improved. It’s quite simple.

FRED DE SAM LAZARO:I asked people displaced from the riverside who they voted for in the election.No one, they said. We lost our election cards when they took our homes away, and we don’t have proper addresses, which are required to get new ones.

WOMAN:We’ve been promised help for a long time. Whoever gives it to us, Narendra Modi or anyone else, we’d be very thankful.

FRED DE SAM LAZARO:As in Gujarat, the new prime minister’s challenge will be to offer hope to some 400 million people who live below India’s poverty line, that his pro-business policies are their best path out of poverty.

Under-Told Stories travels to Gujarat, India to explore Narendra Modi’s policies. Modi has amassed supporters throughout the country who praise his economic vision by creating jobs and improving the country’s infrastructure. But critics argue many states, whose residents live below the country’s poverty line, are still lacking in education and health care. Fred de Sam Lazaro reports.

DISCUSSION QUESTIONS
SEE MORE EDUCATIONAL CONTENT HERE
The Vision
Under Modi’s leadership, Gujarat made land available for factories and redevelopment promising 500,000 jobs and keeping some $50 billion in the country that now goes elsewhere because India lacks such facilities. 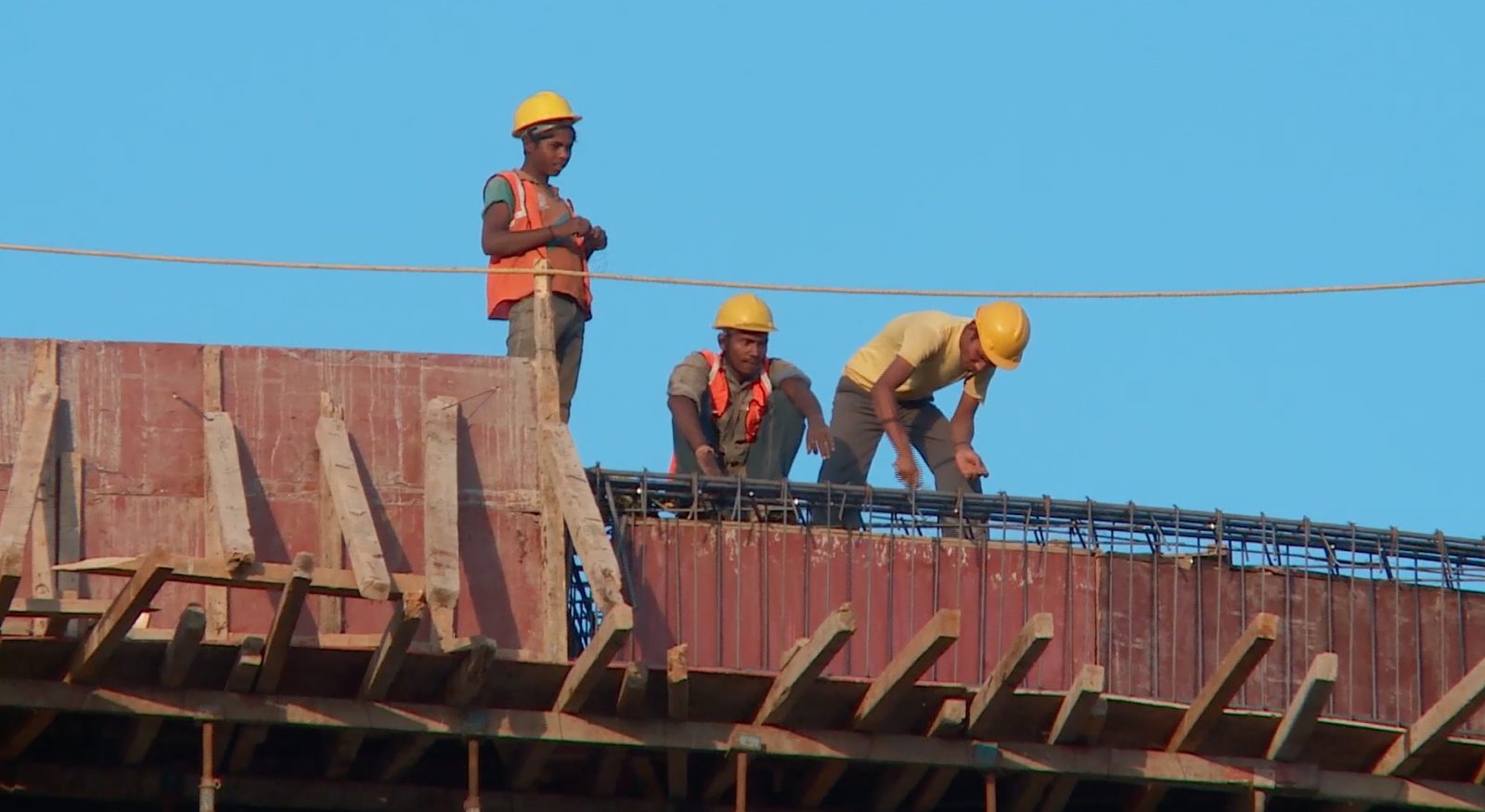 High rises are shooting up across India, but critics say that this economic boom leaves behind much of the population

Not everyone is pleased with Modi’s approach

Critics say it favors big business at the expense of the poor, and accusations that Modi did little to stop programs against Gujarat’s impoverished Muslim minority back in 2002 fuel allegations of his ties to Hindu nationalist groups 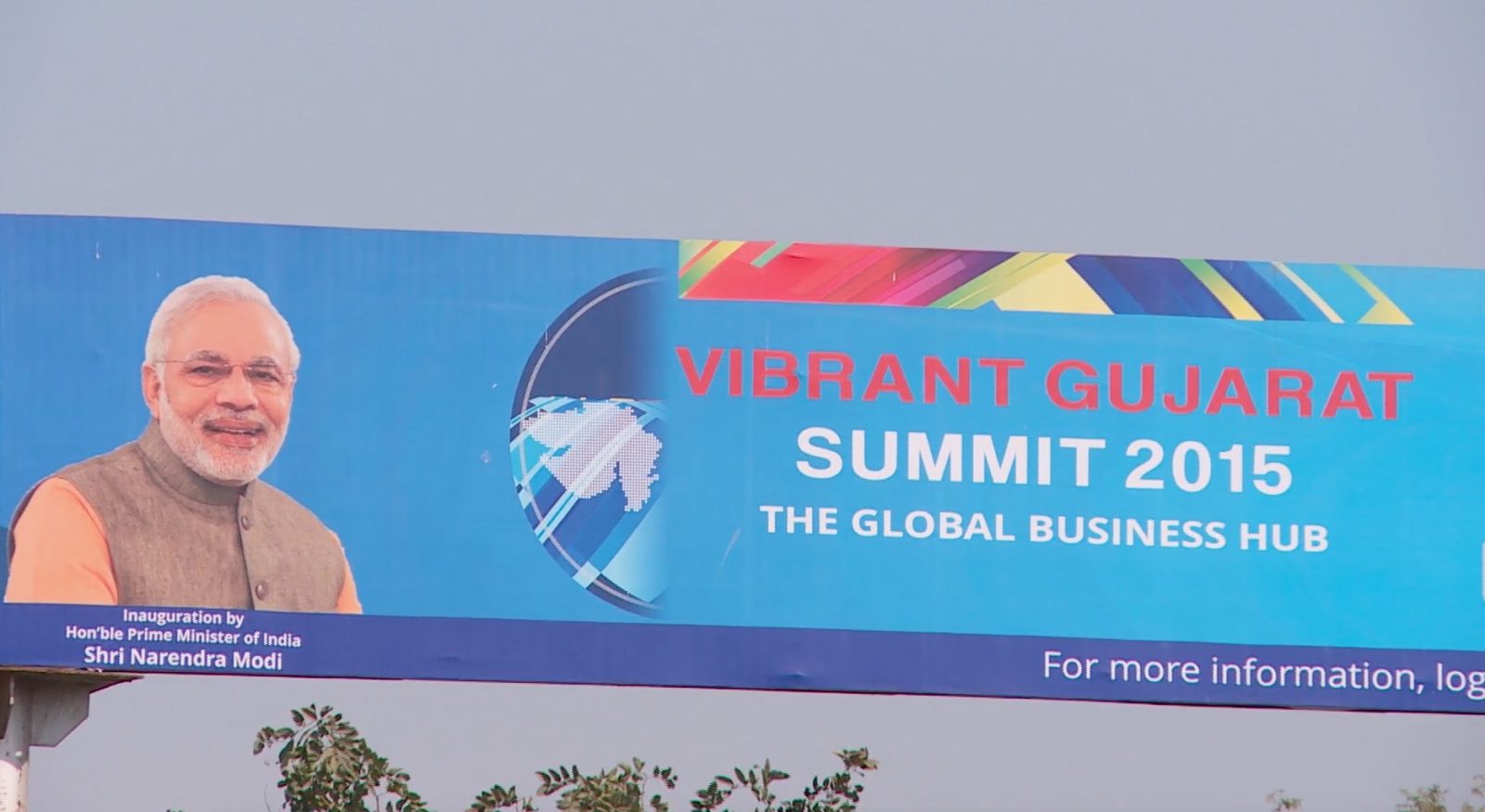 Modi’s party says their economic plan is for all Indians, and that job creation will lead to other advancements in health care and education for those below the poverty line

[Modi] has said repeatedly, “I said, I want to see Muslims in India with the Quran in one hand, their holy book, but with the computer in the other hand.” Now that is true empowerment. Jobs are true empowerment.
M.J. AKBAR, spokesman for Modi’s Bharatiya Janata party