Sand is a crucial resource, but mining it comes at a cost.
Play Story
Subscribe to Stories

Judy Woodruff: Yet another growing environmental threat is closer to shore: sand mining. It accounts for 85 percent of all mineral extraction, much more than all fossil fuels combined. And that comes at a heavy cost. Special correspondent Fred de Sam Lazaro traveled to Cambodia, where sand mining has become a big business and where it threatens people’s way of life.

Fred de Sam Lazaro: From commerce to fishing, transport and rice production, the mighty Mekong River is the lifeblood of Southeast Asia. But, today, one of the biggest businesses on the river in Cambodia is dredging it for sand to make concrete, feeding one of the biggest industries in the developing world, development. Nowhere has demand for sand been greater than in Asia. Across this sprawling continent, tens of millions of miles of new roads have been built connecting hundreds of millions of new homes. Construction has driven the large economies, like China and India, and the smaller ones, like Cambodia, whose cities, like Phnom Penh, have joined the building binge.Skyscrapers, malls and apartments crowd the skyline, much of it investment from China, fueling an economy that’s grown at a healthy 7.5 percent each year since 2005. Monyrath Yos of the government ministry overseeing mineral resources says sand mining plays an important role.

Monyrath Yos (through translator):The sand mining industry in Cambodia provides economic benefits to Cambodia both directly and indirectly. It deepens the river and makes transportation easier. It also provides material and land for construction. And it contributes to the national revenue.

Les Kaufman:Sand is actually a very finite resource, and people don’t realize it. You can run out.

Les Kaufman:So there’s this big incentive to mine it out of water, out of freshwater or the ocean.

Fred de Sam Lazaro:Aside from construction, glass and electronics, sand has found other uses on a massive scale in recent years, in America to fracture rocks for oil and gas, in Singapore to make, well, more Singapore.The tiny prosperous city state has expanded its land mass by about 25 percent in recent years. A lot of the sand for that came from Cambodia. It’s prompted concern about environmental damage and accusations of corruption.

Vannak Hun (through translator):The volume of imports recorded in Singapore shows a different figure from exports recorded in Cambodia. So you can see this is a big issue, a lack of transparency.

Fred de Sam Lazaro:Exports of sand to Singapore, which came from Cambodia’s coast, were banned in 2017, but environmentalist Vannak Hun, who’s spent time in prison for his activism, says sand mining along the Mekong has continued at a record pace.It’s not just the skyline of Phnom Penh, that’s being transformed, he says, but the very surface of what was known as a city of lakes.Despite loud protests, Phnom Penh’s biggest lake, Kak Boeung, was filled in with sand from the Mekong to create more land for construction. It was the largest of 12 lakes and wetlands that have disappeared from the city.

Vannak Hun (through translator):The most affected community are people who live along the river. When there is collapse, when people lose their land, lose their house, there’s no compensation.

Mom Mut (through translator):We woke up at 1:00 in the morning, and we found that it had all collapsed into the river.

Fred de Sam Lazaro:Mom Mut is having concrete pilings built to save what’s left of her home after part of it disappeared.

Mom Mut (through translator):Only four months after sand dredging started, we noticed the land was different. It kind of changed.

Fred de Sam Lazaro:She showed us paperwork from the dredging company promising compensation if her property was damaged. Two years on, she’s received nothing and isn’t optimistic that will change.

Mom Mut (through translator):I hope to prevent the rest of my house from collapsing.

Fred de Sam Lazaro:It’s cost her $22,000, she says, more than five years worth of savings. And there’s a chance it won’t save her home. A neighbor just a mile away built a similar underpinning, only to see the rear of her home collapse.

Sarom Thorn (through translator):I was just walking over there. It got slippery and I fell. And then I broke my arm. And I also lost one of my eyes.

Fred de Sam Lazaro:It’s a story repeated downriver near dredging platforms, including those in Vietnam, where sand mining has also taken off.Cambodia’s government insists that dredging companies are approved to operate only in limited and defined areas and after an environmental impact assessment.

Monyrath Yos (through translator):Riverbank erosion has taken place for millions of years, since the formation of the Earth. So in the area that has the riverbank erosion, it’s a natural factor, a natural condition. We only allow the sand dredging in the shallow areas.

Monyrath Yos (through translator):We have a 24-hour hot line that operates seven days a week. Villagers who live along the river, they can make a call to file a complaint for any irregularity that they have seen.

Sarom Thorn (through translator):I cannot read. I cannot write. I don’t know how to do it. And, also, the village chief doesn’t even come to see what is happening to the house.

Fred de Sam Lazaro:There’s another threat that could have even wider consequences: Prices for fish are inching up.

Sreynoch Song (through translator):The fisherman tell me it’s harder to catch fish now in the river. I don’t know why.

Fred de Sam Lazaro:How much has the price gone up?

Sreynoch Song (through translator):It’s increased about 25 percent since last year.

Les Kaufman:You’re taking a lot of sand out. There goes the fish habitat.

Fred de Sam Lazaro:But biologist Kaufman, who studies several of critical Mekong species, says fish stocks are declining. He blames the combination of sand dredging and dams built to meet soaring demand for power. They have wiped out spawning areas.

Les Kaufman:People don’t realize, when they are removing the sand, they’re taking food off plates. That’s the tradeoff. It’s not usually reckoned in.

Fred de Sam Lazaro:He says, for many who live along the Mekong and most major Asian rivers, a day of reckoning seems much closer at hand.For the “PBS NewsHour,” this is Fred de Sam Lazaro in Phnom Penh, Cambodia. 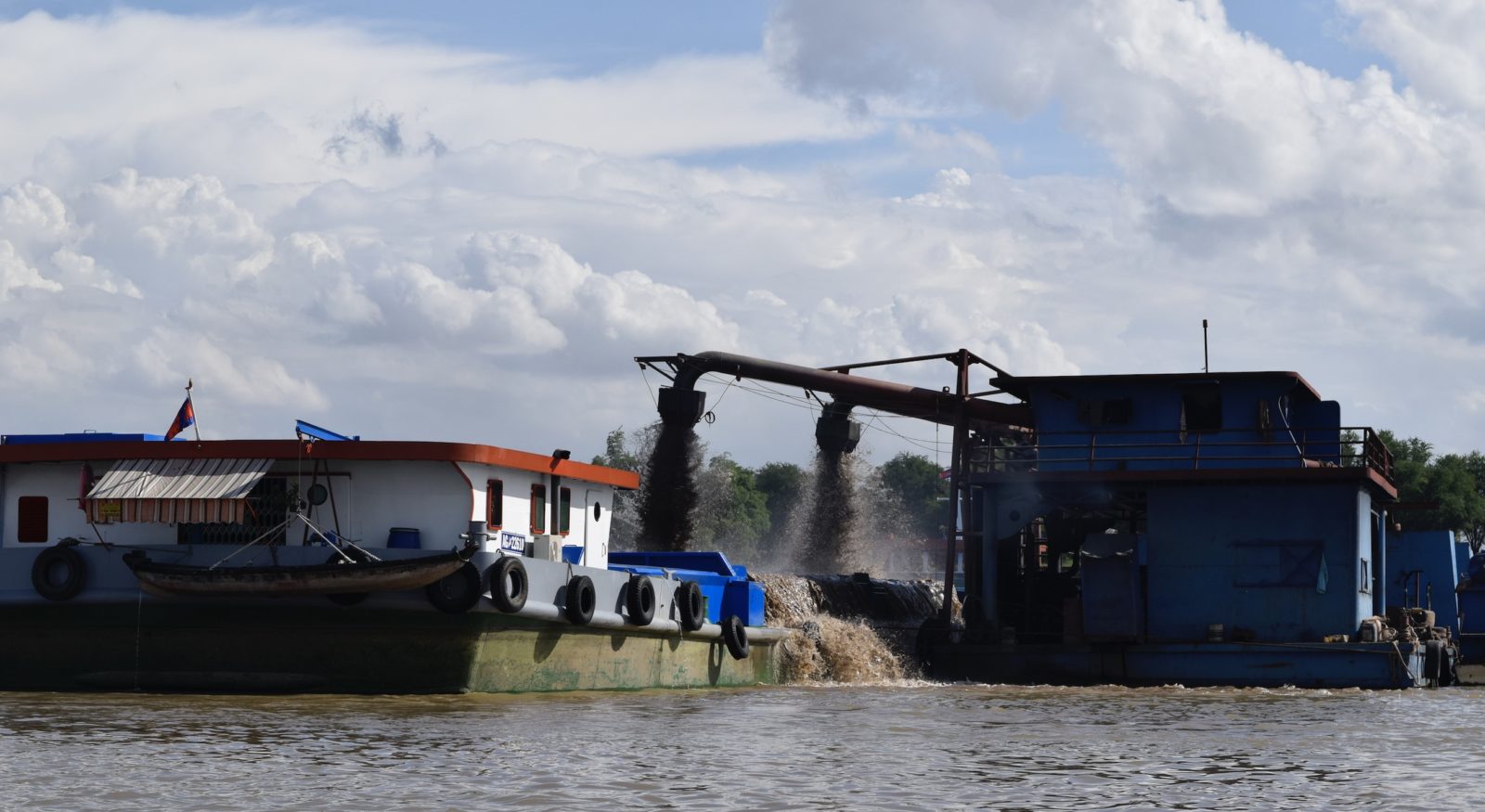 “The sand mining industry in Cambodia provides economic benefits to Cambodia both directly and indirectly. It deepens the river and makes transportation easier. It also provides material and land for construction. And it contributes to the national revenue.”

“The most affected community are people who live along the river. When there is collapse, when people lose their land, lose their house, there’s no compensation.” 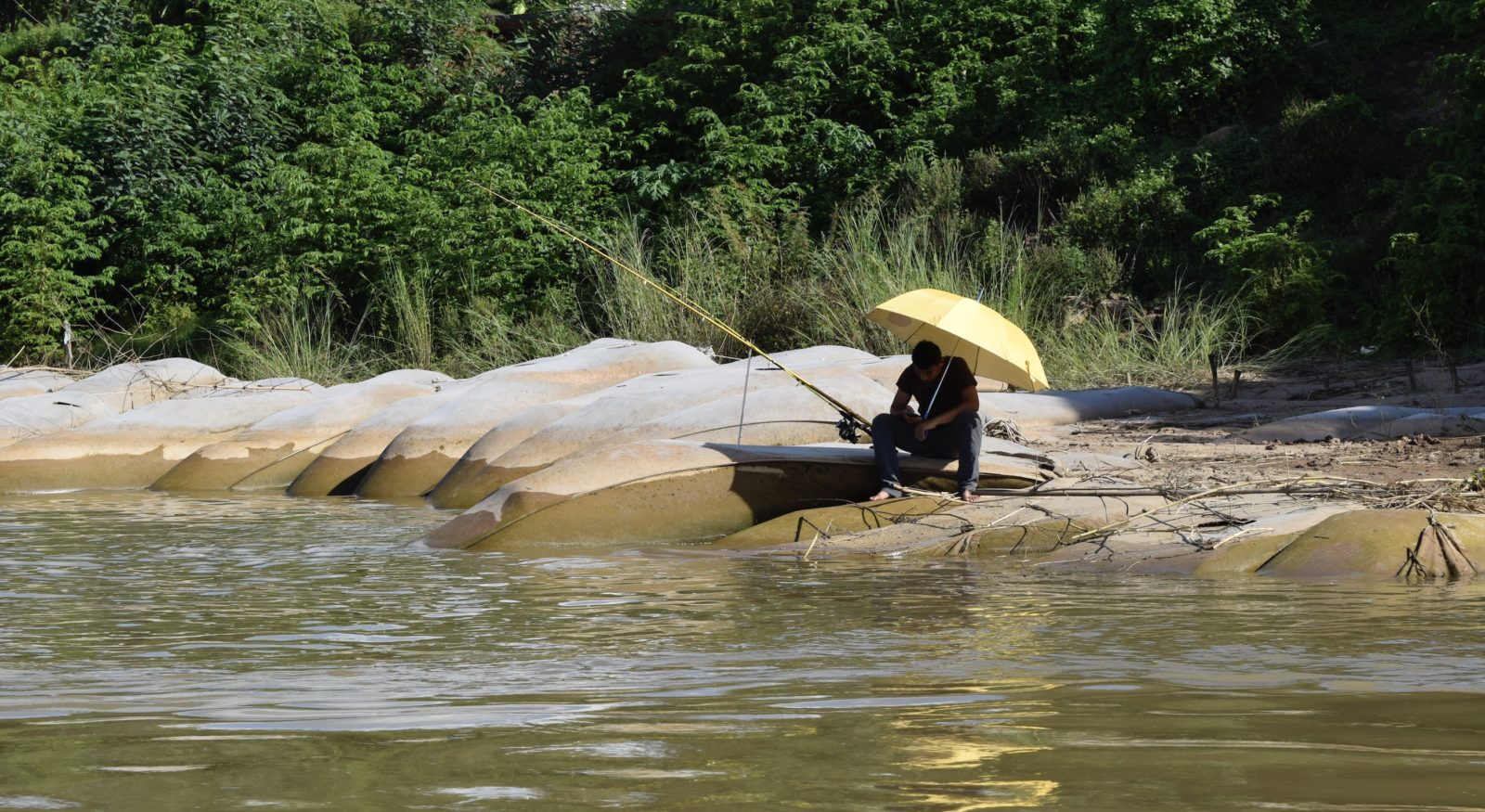 People living near the river’s edge have seen destruction firsthand.

Part of Mom Mut’s home fell into the river.

“We woke up at 1:00 in the morning, and we found that it had all collapsed into the river.”