The challenges of integration
Play Story
Subscribe to Stories

FRED DE SAM LAZARO, NewsHour Correspondent: Immigration from Latin America, Asia and Africa has brought new traditions and cultures to Minneapolis and St. Paul. They were once pretty homogeneous cities, says Satveer Chaudhary. He’s the son of immigrants from India and the state’s first Hindu legislator.

SATVEER CHAUDHARY, Minnesota State Senator: It used to be Swedes and Norwegians arguing over lutefisk or lefse. Now we’ve got Germans, Scandinavians now living in the same society as Somalis, and Hmong, and South Asians. And so these are all the growing pains of a growingly diverse society.

FRED DE SAM LAZARO: As many as 50,000 of the new immigrants are Muslims from Somalia. Many voted for the first time in 2006, helping Keith Ellison become the nation’s first Muslim member of Congress.

FARHEEN HAKIM, Activist: I feel that the Muslim community, at least in Minnesota, has gained much more confidence than they had before. There were two Muslim candidates in 2006, and one actually won.

FRED DE SAM LAZARO: Social worker Farheen Hakim was the other candidate. She’s run for mayor of Minneapolis and for county commissioner and says Muslims must get involved with the everyday events of American citizenship. That’s one reason she formed this Muslim Girl Scout troop, out on a field trip recently.

GIRL SCOUT TROOP: On my honor, I will try to serve Allah and my country to help people at all times and to live by the Girl Scout law.

And, you know, I don’t want them to constantly feel that they have to be different or they are different.

You would have had passengers who, frankly, told the MAC that they were going to pick cabs with a certain color top light because they may not want to ride with a Muslim cab driver.

FRED DE SAM LAZARO: Just how different Muslims are or should be is an ongoing debate, particularly among refugees from war-torn Somalia. Many came to this meeting seeking some answers, on the Koran, on America, and how the two intersect.

On both fronts, the answer they were told is not clear-cut. For example, Islam forbids consuming alcohol or pork, but imams differ on whether it’s OK to handle them on the job. That very question had become an issue at Minneapolis-St. Paul International, an airport at its most international in the taxi line. About three-quarters of the 600 licensed drivers are Somali immigrants.

STEVE WAREHAM, Minneapolis-St. Paul International Airport: And I believe we have 5,022 documented refusals over the last several years. It has been a serious customer service problem.

FRED DE SAM LAZARO: The airport’s Steve Wareham convinced commissioners that it was time to crack down. Drivers said the concerns were overblown. They suggested an accommodation, like one reached across town at Target. When Muslim checkout clerks refused to handle pork products, the retailer moved them to jobs away from the food section.

ABDINOOR DOLAL, Taxi Driver: Whenever someone comes out with exposed alcohol, we give him the right, because I’m not willing to carry, but I will look for someone who is willing to carry, and I will call him forward to take the customer.

MIKE LANDY, Commissioner, Minneapolis-St. Paul International Airport: Frankly, we have 600 letters. You would have had passengers who, frankly, told the MAC that they were going to pick cabs with a certain color top light because they may not want to ride with a Muslim cab driver.

I am told this is bogus. It is not an issue. Islam does not prohibit touching pepperoni pizza.

KATHERINE KERSTEN, Columnist, Star Tribune: I am told this is bogus. It is not an issue. Islam does not prohibit touching pepperoni pizza. What about the next time around, when the Muslim cab drivers or a minority of Muslims in this community say that they won’t transport women wearing tank tops, they won’t transport unmarried couples?

FRED DE SAM LAZARO: Jason Lewis, who bills himself as “Mr. Right,” railed against the immigrants’ demands on his radio show.

JASON LEWIS, Radio Talk Show Host: Take this as a sign, folks, of why the current immigration policy of open borders, why the current obsession with diversity training, with multiculturalism is doomed to failure.

We can show tolerance and accommodation for our neighbors. At the same time, we hope other communities will not be afraid to respect ours. It’s a beautiful thing.

MORT RYWECK, Human Rights Activist: All of the religious groups in the country that have come over here from generation to generation have gone through some of the same problems that you’re going through.

MICHAEL JORDAN, Law Professor: There are things that are going to happen in your day-to-day lives that may offend you, and it may offend your religious practices. But the price that we pay for a lot of the freedoms that we have in this country is accepting a lot of those inconveniences. Why? Because it’s believed a greater good is served.

STEPHEN COOPER, Human Rights Attorney: Throughout the country, there are cases and battles going on between virtually every religious group in the courts. It’s always hard to come up with exactly where one person’s rights end and another person’s rights start. And quite often, both sides have an excellent reason for believing they’re right.

IMAM HAWA MUSE (through translator): We can show tolerance and accommodation for our neighbors. At the same time, we hope other communities will not be afraid to respect ours. It’s a beautiful thing: I like the idea of people exercising their democratic rights and agreeing that they can live together, with a few accommodations.

FRED DE SAM LAZARO: But advocates for the airport cab drivers said they were no different from other religious minorities that are accommodated in America, like Christian pharmacists whose refusal to dispense birth control pills is protected in many states. Hassan Mohamud is a local imam.

IMAM HASSAN MOHAMUD, Al-Taqwa Mosque: We are disappointed because we see this increase in penalty as a harsh penalty against a group of fellow Americans only because they are practicing their faith.

FRED DE SAM LAZARO: The airport’s stiff new penalties will prompt some drivers to look for new work, but others say they could look for recourse in a very American way: through the courts.

of the growing immigrant population in Minneapolis and St. Paul are Somali Muslims, who have been arriving steadily since civil war wracked their home country in 1991. The fusion of Somali and Minnesota cultures has transformed some neighborhoods in addition to creating some conflict. 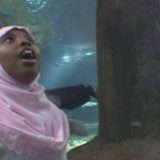