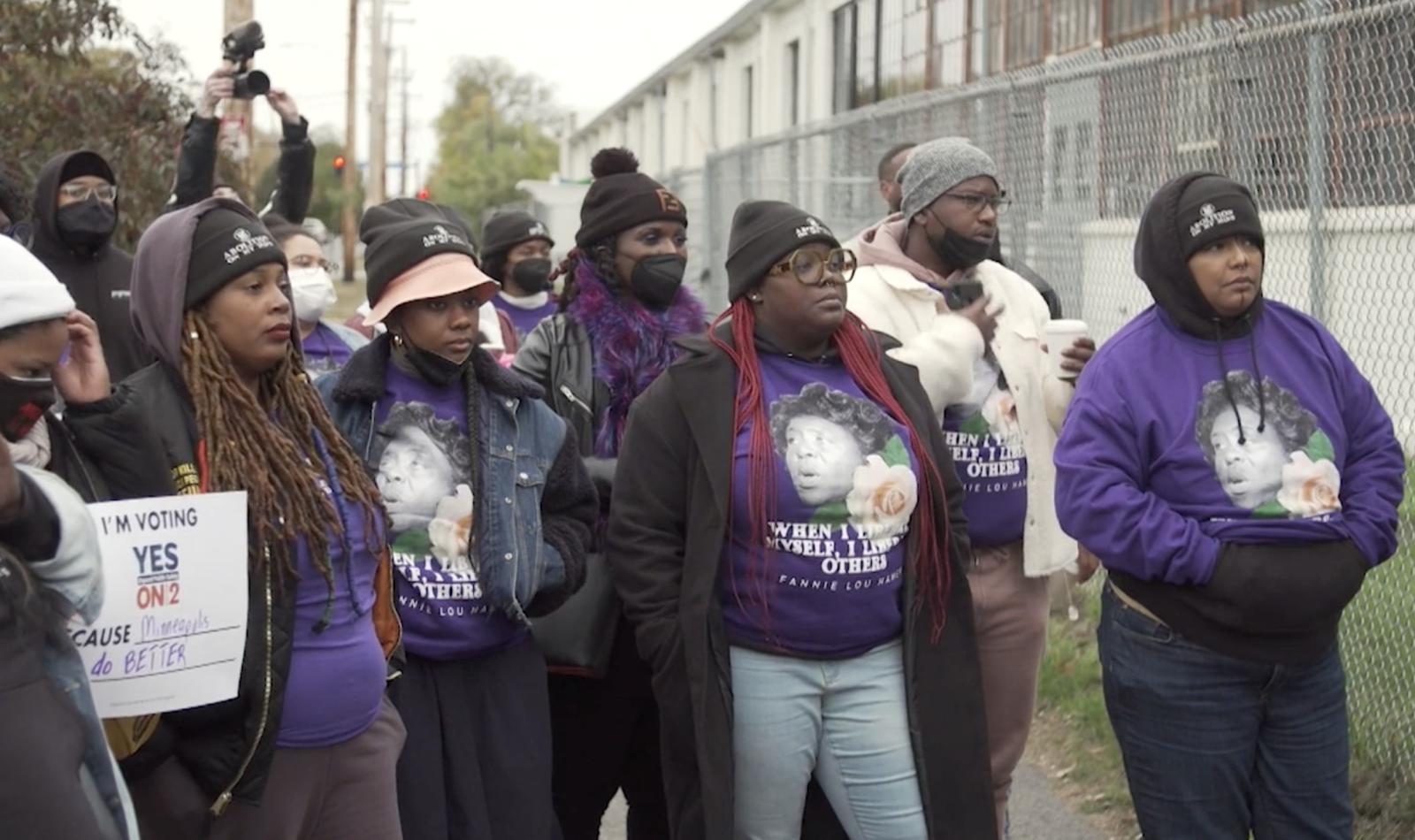 Voters in Minneapolis will head to the polls next week for the first city election since the police officer killing of George Floyd in a race that could be the most expensive in the city’s history.And, as special correspondent Fred de Sam Lazaro reports, it’s dividing the community over the issue of public safety.

Fred de Sam Lazaro:On a recent afternoon in Minneapolis, a small, but spirited crowd withstood a gusty fall day to send a message:

Fred de Sam Lazaro:2 is Question 2 on the ballot in the election here. It’s an initiative that could dramatically reshape policing and public safety in the city where George Floyd was murdered a year-and-a-half ago.The proposal has drawn support from Minnesota Democrats, like state Attorney General Keith Ellison and Congresswoman Ilhan Omar.

Rep. Ilhan Omar (D-MN):We’re voting yes because there is a vision we can collectively create as a city on what public safety should look like for us.

Fred de Sam Lazaro:The plan would amend the Minneapolis charter, removing the police department and the city’s requirement to fund a minimum number of officers. There would instead be a Department of Public Safety that takes a — quote — “comprehensive public health approach,” including police officers, if necessary.The department would report not just to the mayor, but also the City Council. And it would likely include social workers, housing experts, and mental health specialists.Minneapolis resident Mercedes Stevenson welcomes the amendment. She’s a survivor of domestic violence.

Mercedes Stevenson, Minneapolis Resident:It’s about expanding public safety. We as a community need more trained individuals to help with mental health and emotional health crises.I myself suffer from PTSD, and I know that my trauma response wouldn’t be the same as anybody else’s response. And so having someone trained and knows my language, and that would be comforting to me.

Fred de Sam Lazaro:But the amendment is far from universally supported.Teto Wilson lives and owns a barbershop in the majority-Black North Minneapolis.Teto Wilson Owner, Wilson’s Image Barbers & Stylists: People feel frustrated, and they don’t feel safe. They feel like, if crime happens, and we don’t have the proper amount of police to deal with it, what are we going to do?I don’t feel like there’s enough about it that has been explained for me to feel comfortable voting for a Department of Public Safety.

Fred de Sam Lazaro:The North Side has borne the brunt of the city’s sharp increase in shootings and homicides this year. Memorials to children killed by gun violence dot the neighborhood.

Teto Wilson:Do police harm us in our communities? They have. They most certainly have.But the number of African American men, boys, little girls, women that get killed in our communities by us by far outweighs what the police do. And so we still need to have a deterrent, people that are employed to keep our communities safe.

Fred de Sam Lazaro:Critics say the amendment’s language leaves the door open to defunding or abolishing police. The yes campaign insists that there will still be officers, partially because state law requires them to respond in certain kinds of cases.

Mercedes Stevenson:I feel like there’s some miscommunication and some misconceptions about the police being taken away from the whole situation. And that’s not the truth. We will have these well-trained individuals who will be in the same office as the police.

Fred de Sam Lazaro:Even as the city debates its future, the Minneapolis Police Department continues to make headlines almost daily.About 300 officers more, a third of the force, have left the department since George Floyd’s killing. There have been allegations of intentional slowdowns in service. And body camera video published this month shed light on the department’s response to protests after Floyd’s death.

Man:You guys are out hunting people now. And it’s just a nice change of tempo.

Medaria Arradondo, Minneapolis, Minnesota, Police Chief:As your chief of police, I would not be in favor of this ballot amendment. That does not have to do whether you have an R or a D or an I behind your political affiliations.That is based, again, on the realities on the ground that I see and that our men and women are experiencing every day, including the victims of crime in our city.

Fred de Sam Lazaro:The issue of public safety has dominated an election in which all 13 seats on the City Council are up for grabs, as is the mayor’s office.

Woman:There are 17 candidates on the Minneapolis mayoral ballot.

Fred de Sam Lazaro:The incumbent, Jacob Frey, is voting no on Question 2.Jacob Frey (D), Mayor of Minneapolis, Minnesota: Question 2 has nothing in it about accountability or reform. It is not responsive to those specific issues that people are experiencing every single day within our department.

Fred de Sam Lazaro:The winner will be picked by ranked-choice voting, and some of Frey’s main opponents support the public safety amendment.

Katie Nuth, Minneapolis Mayor Candidate:I have been clear since day one of my campaign that I support a Department of Public Safety and a charter amendment to create it.

Sheila Nezhad, Minneapolis Mayor Candidate:We have been just talking about, how can we change police, what are we going to do about police? But we’re in a public safety crisis in Minneapolis.

David Schultz, Hamline University:We have this group which is more progressive who are behind an initiative to reform police.At the same time, then, we also have what we’re going to call, let’s say, the more centrist Democrats. They appear to be opposed to changes in police funding, thinking that, without changing the charter, some reforms are possible.

Fred de Sam Lazaro:So, while Omar and Ellison say they will vote for the amendment, fellow Minnesota Democrats like Governor Tim Walz and Senators Amy Klobuchar and Tina Smith oppose it. But the divisions aren’t just political.

David Schultz:This is an election about fear, fear of police, fear of not having police. It’s almost primordial, in the sense that people are just worried about, am I going to be safe walking the streets, whether I’m white or a person of color?

Fred de Sam Lazaro:According to the most recent polls, white residents of Minneapolis — and they make up a majority — generally support the public safety amendment.And even though race and policing are at the heart of the debate, most Black voters oppose it.Teto Wilson says the numbers may reflect white allies sensitized to the fact that Minneapolis has some of the worst racial inequality in the nation.

Teto Wilson:They may think, hey, yes, we’re going to side with African Americans. We’re going to say we don’t want policing either.That’s not helping us. They’re thinking that it’s helping us because they witnessed George Floyd being murdered, the same way we did. They may be thinking that, hey, you know what? Let’s un-guilt ourselves.

David Schultz:So, Minneapolis has become, in some sense, the epicenter for race and policing in America.

David Schultz:If the ballot initiative were to pass, this is going to be a central issue between the Democrats and Republicans as they fight for control of Congress.

Amna Nawaz:And Fred’s reporting is a partnership with the Under-Told Stories Project at the University of St. Thomas in Minnesota.

Voters in Minneapolis will head to the polls in November 2021 for the first city election since the killing of George Floyd. The race could be the most expensive in Minneapolis history. And as special correspondent Fred de Sam Lazaro reports, it’s dividing the community over the issue of public safety.

DISCUSSION QUESTIONS
SEE MORE EDUCATIONAL RESOURCES HERE
On the ballot
are the mayor’s office, 13 city council seats plus an amendment to the city charter that would remove the police department and the city’s requirement to fund a minimum number of officers.
The new department of public safety
would report not just to the mayor, but also the city council, and likely include social workers, housing experts and mental health specialists. 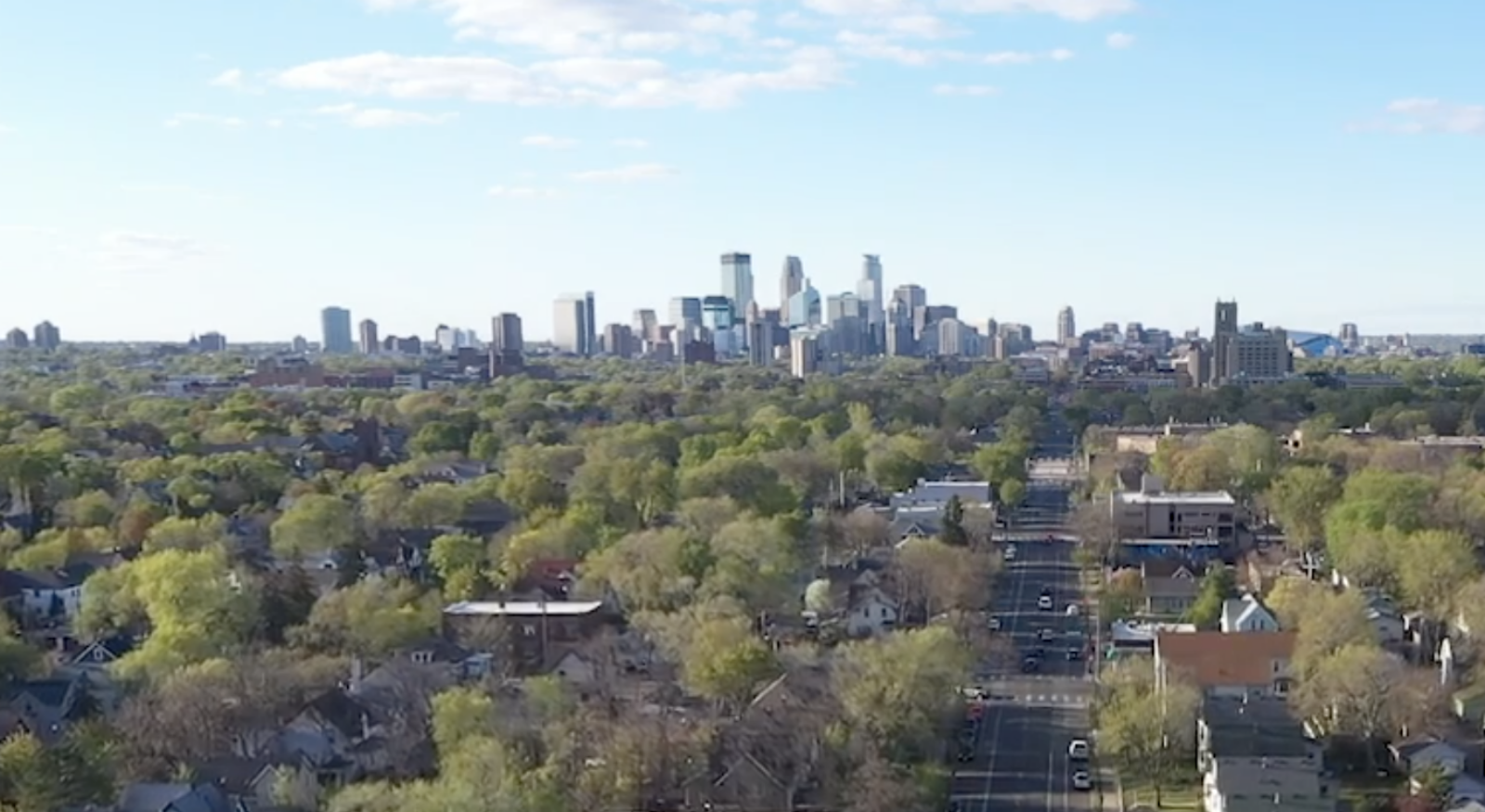 “Minneapolis has become… in some sense, the epicenter for race and policing in America.”