Judy Woodruff:Workers in meatpacking factories and the livestock farms that supply them are among the hardest-hit by COVID.Special correspondent Fred de Sam Lazaro is back now with a report on efforts to get them vaccinated for his series “Agents For Change.”

Fred de Sam Lazaro:There’s been little to cheer about in recent months in meatpacking towns like Worthington, Minnesota. The giant JBS pork processing plant was an early COVID hot spot.Like several other facilities, it shut down for weeks, before being ordered to reopen by former President Trump, who declared them critical to the nation’s meat supply.

Jessica Lee Velasco:We have honestly seen, like, the importance of folks who didn’t have the option to stay home and work from a laptop continuing to work in, like, confined and crowded spaces.

Fred de Sam Lazaro:Nationwide, at least 50,000 meatpackers have been infected with the coronavirus, and some 250 lost their lives.But Jessica Velasco, who works for a community group called Unidos, says the outlook is beginning to feel brighter. At JBS, which offered a $100 incentive, about 1,600 of its 2,200 workers have received the single-dose Johnson & Johnson vaccine. That still leaves thousands of others unvaccinated, many in smaller factories and on livestock farms.Immigrants comprise more than half the 12,000 to 15,000 population of Worthington and the surrounding farm country. The languages they speak are from Southeast Asia, from the Horn of Africa, and the predominant group is from Central America. But, even here, many are from indigenous groups and don’t necessarily speak Spanish.Minnesota’s Department of Health began conducting pop-up vaccination events last weekend and saw a steady trickle of takers.

Jessica Lee Velasco:There are still some folks who are not excited.

Fred de Sam Lazaro:And a big part of Velasco’s job these days is to reach them.For several hours each week, she goes door to door, on this day, in a trailer park. It’s one of many polite, but unproductive, exchanges.

Jessica Lee Velasco:I asked her: “Have you taken it?”She said, “No.”And she says she doesn’t know if it really works, because it’s still semi-new. And she doesn’t know what the after-effects would be.

Fred de Sam Lazaro:Can you tell me, reading through the lines, what is driving that reticence?

Jessica Lee Velasco:I know it is the fear, but it’ll probably primarily be her situation, status, for her and her family.

Fred de Sam Lazaro:Estimates vary on the number of undocumented families here. But it’s one more challenge, to reach a population that is often invisible by choice.Next stop for Velasco, across the street, and another no.

Jessica Lee Velasco:He said, “I’m going to leave it in the hands of God.”

Rev. Jim Callahan:God has given us a gift. They have made a vaccine.

Jim Callahan:We also put it in the context of what Pope Francis had said, get the vaccine, because that is the greatest act of charity and love that you can do.

Fred de Sam Lazaro:Both men publicized their own vaccination on social media. All this is happening as the campaign approaches a new phase, with more vaccines becoming available.

Fred de Sam Lazaro:University of Minnesota epidemiologist Michael Osterholm says there’s still a real threat of resurgent infections, particularly with fast-spreading and deadlier new variants.Reaching the unvaccinated is becoming essential, as well as more difficult. Despite its problems, he says, we have just seen the easy part of the vaccine rollout.

Michael Osterholm:And so I think you’re going to see a transition where those big, coliseum-wide campaigns where we can vaccinate thousands in a day, which are really important, give way more and more to these efforts by local and state public health officials to reach out to individuals, whether they want to be found or not, and to try to get them vaccinated.So, it is critical we try to reach everyone house by house, lot by lot.

Fred de Sam Lazaro:Jessica Velasco is redoubling her efforts in trailer parks at the bus stop for meatpacking workers. For her, it’s also personal. Among those lost to the pandemic was her father, Ovee Velasco. Originally from Mexico, who moved here two decades ago. He was 60.

Jessica Lee Velasco:I reflected on how folks who had lost someone or who passed away by themselves because they have — all their loved ones were back home in a different country.I at least got to see my dad. My family got to see their — their loved one. But, yes, my dad’s passing really pushed me to keep — to keep going.

The JBS pork processing plant in Worthington, Minnesota was an early COVID hotspot.

Nationwide 50,000 meatpackers have been infected with the coronavirus and some 250 have lost their lives, but efforts are being stepped up to vaccinate this community of frontline workers. Simply reaching them, however, presents challenges of its own.

More than half
the population of Worthington and the surrounding farm country are immigrants.

Jessica Velasco is a community organizer who’s trying to get the word out. 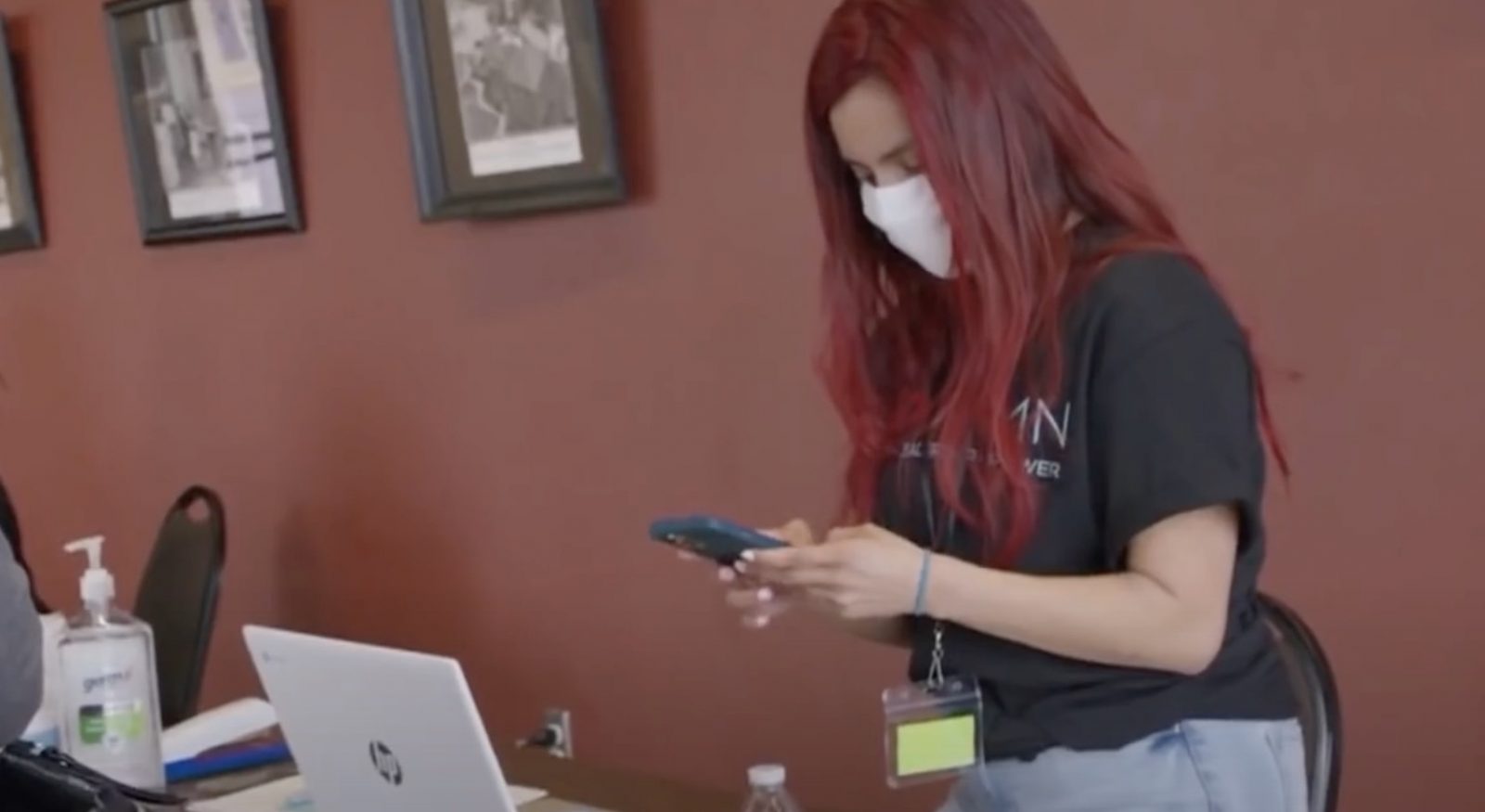 “I think you’re going to see a transition where those big, coliseum-wide campaigns where we can vaccinate thousands in a day… give way more and more to these efforts by local and state public health officials to reach out to individuals.”