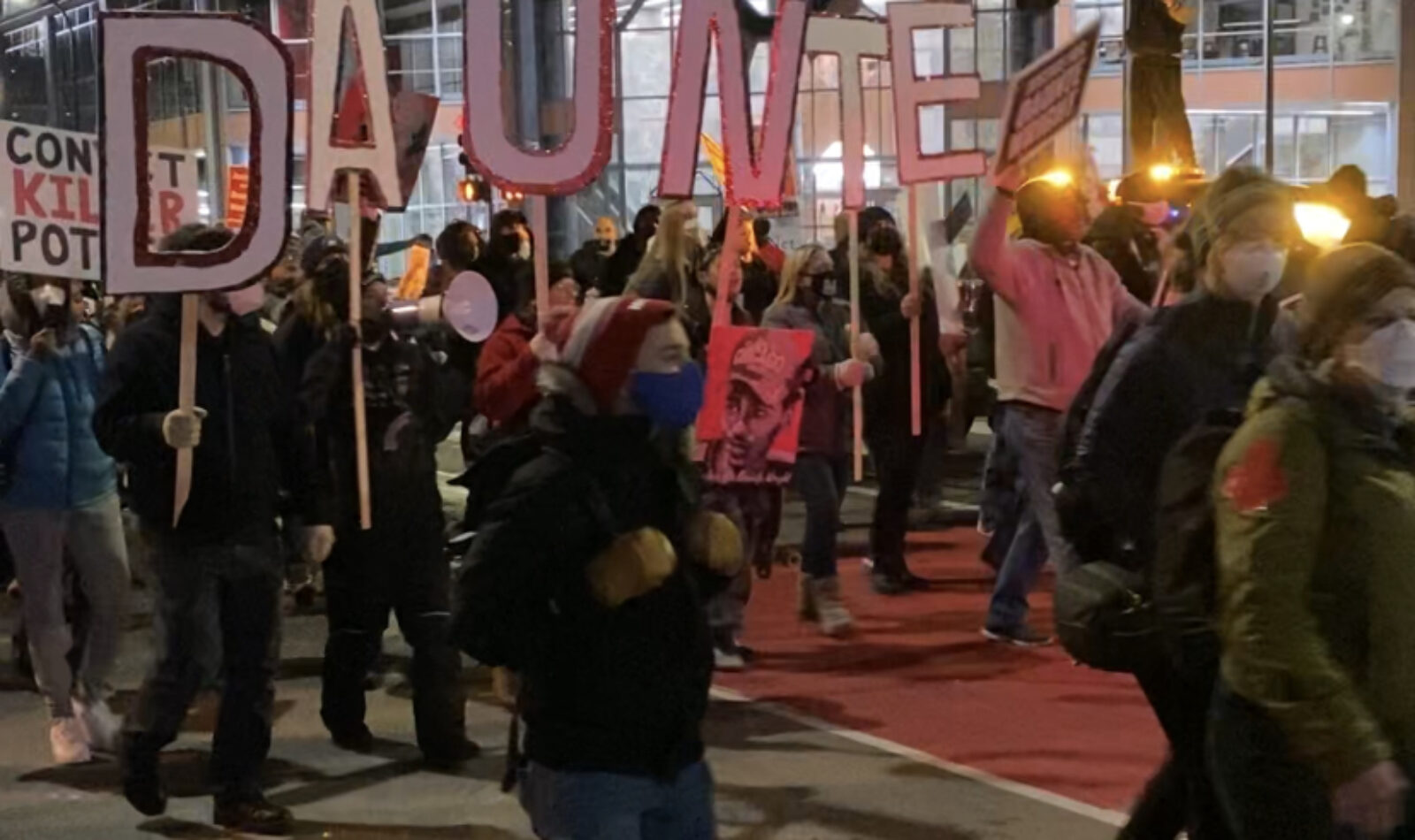 And a warning:Some of the images in this story are disturbing.

Fred de Sam Lazaro:In downtown Minneapolis last week, protesters rallied for the family of Daunte Wright. They took to the streets outside the Hennepin County courthouse as jury selection got under way in the manslaughter trial of Kim Potter.

Protester:Kim Potter is a killer cop, and she needs to be imprisoned for a long time. No justice, no peace.

Fred de Sam Lazaro:Perhaps underlining the simmering tensions here, a car forced its way through the crowd. No one appeared seriously injured, and the protest went on.The Minneapolis-St. Paul area has been on edge for more than 18 months, since the police killing of George Floyd and the unrest that followed. But that anxiety intensified last April in the waning days of Derek Chauvin’s murder trial, when Wright was killed during a traffic stop in the Minneapolis suburb of Brooklyn Center.Potter, a veteran of the force, and two other officers pulled Wright over for expired tabs and a hanging air freshener. The officers then discovered Wright had an outstanding warrant, and, when they went to arrest him, he tried to get back in his car.Kim Potter, Former Brooklyn Center Police officer: Taser! Taser! Taser!Holy (EXPLETIVE DELETED)! I just shot him.

Fred de Sam Lazaro:The killing set off days of protests outside the Brooklyn Center Police Department. There were clashes between demonstrators and law enforcement, who deployed rubber bullets, flashbangs, and tear gas.Meanwhile, Wright’s family grieved publicly.Katie Bryant, Mother of Daunte Wright: There’s never going to be justice for us. The justice would bring our son home to us, knocking on the door with his big smile, coming in the house. Justice isn’t even a word to me. I do want accountability, 100 percent accountability.

Fred de Sam Lazaro:Potter resigned from the department, and was later charged with first and second-degree manslaughter.During today’s opening statements, prosecutors laid out their case.

Erin Eldridge, Assistant Minnesota Assistant Attorney General:She was trained to be aware of the differences between her gun and her Taser. This case is about an officer who knew not to get it dead wrong, but she failed to get it right.

Paul Engh, Attorney For Kim Potter:Mr. Wright can stop. All he has to do is stop, and he would be with us. But he goes. She can’t let him leave because he’s going to kill her partner.And so she does “Taser, Taser, Taser,” and she pulls the trigger believing that it was a Taser.

Fred de Sam Lazaro:Potter will take the stand in her own defense.Rachel Moran, University of St. Thomas: Some people want the criminal system to speak to really broad issues of justice and morality, and they want the trial to be about, was Kim Potter wrong?

Fred de Sam Lazaro:Rachel Moran is a law professor at the University of St. Thomas. She says the trial may be dissatisfying for members of the community clamoring for systemic change.

Rachel Moran:The trial is going to hinge on, can the state show that she — not that she meant to kill him, but that she disregarded her training, that her act of grabbing the gun, instead of the Taser, was so beyond the pale of what any reasonable officer would do, that it could be considered reckless?Those are tough questions, actually, to answer, and that’s where the nuance exists.

Fred de Sam Lazaro:In the meantime, officials and residents are grappling over what’s next for Brooklyn Center.The killing of Daunte Wright seemed to bring to the surface issues around race and policing that had lurked just below in a city that rapidly has become Minnesota’s most diverse.Mike Elliott, Mayor of Brooklyn Center, Minnesota: I feel very much personally responsible for what happened with the killing of Daunte Wright.

Fred de Sam Lazaro:But it’s been a tough sell for you, hasn’t it?

Mike Elliott:It has, as anything new is a tough sell, right?

Fred de Sam Lazaro:After police unions warned the proposal would threaten public safety, the city council this week approved a compromise, taking less money than originally planned from the police department. For now, all eyes are on the courtroom.

Mike Elliott:I, along with everybody in our community, wants to see justice served.Justice doesn’t just, though, mean what happens in the courtroom. It is preventing the kind of conditions that can lead to a Daunte Wright being shot and killed.

A community on edge

Opening arguments began on December 8 in the trial of former police officer Kimberly Potter, charged with manslaughter in the death of 20 year old Daunte Wright.  Our NewsHour report examines the broader implications of a case that emerged in a Twin Cities community already on edge following the murder of George Floyd.