The Failure of Micro Finance

FRED DE SAM LAZARO:Some of India’s poorest people have become victims of loan sharks. What’s happened to these women has tarnished the widely praised reputation of microlenders, who give small loans to help people become self-sufficient.

JIM LEHRER:Now the story of banks loaning money to the poor in India. Both the banks and their poor customers are in trouble.And special correspondent Fred de Sam Lazaro has our report.

WOMAN (through translator):They came to us continuously for 10 days, and they offered loans. They said, we will give you loans and you can pay them back in easy installments. It’s not a hard thing.

FRED DE SAM LAZARO:People in villages like this say agents from various microfinance companies would come in and try and sell them on loans, without regard to whether they had other loans outstanding. There were no questions asked about what the loans were for. The goal, critics of these companies say, was merely to increase volume, so as to impress and attract the big investors.

MARIA POLEPAKA (through translator):I borrowed money for our daily needs, for the kids’ education. And I kept up with the payments every week for six years. But, when there is no work, it is very difficult.

FRED DE SAM LAZARO:Microfinance used to be the domain of nonprofit organizations, who carefully considered how the money would be used — it had to be for new enterprises that generated income — and whether it could be repaid.The repayment rate has always been much higher than any commercial lending, around 98 percent. That’s one reason microfinance became a big business in India. Over the past decade, new commercial companies have handed out $7 billion worth of loans. And they have attracted lots of investors.SKS Microfinance raised $350 million in an initial public stock offer last July — the result, a competitive, often ruthless, marketplace. Almost all of these women say they were coaxed into several loans from different companies, ranging from U.S. $500 to $1,000.

MARIA POLEPAKA (through translator):I have loans from three different companies, about $700 in all. I use the money from one to pay off the others, and I will continue to do that until I can’t anymore, and then I will stop making payments.

FRED DE SAM LAZARO:There’s broad agreement that microfinance can be an effective tool to bring hundreds of millions of poor people into the global economy. The key question is whether profits can be thrown into the mix, and if so, how much profit?BASIX, the company making this promotional video, began as a nonprofit, but switched about a decade ago.

NARRATOR:BASIX will strive to yield a competitive rate of return for its investors, so as to be able to attract mainstream capital and human resources on an ongoing basis.

FRED DE SAM LAZARO:BASIX founder, Vijay Mahajan, says commercialization is necessary because there just isn’t enough money in the nonprofit world to meet all the need.

VIJAY MAHAJAN, BASIX:The capital investment that’s required to meet all the, you know, unmet needs of poor people in this country, for — the world, for all kinds of things, it runs into trillions of dollars. And you need, therefore, mainstream capital to actually underpin any attempts at addressing this in a businesslike way.

FRED DE SAM LAZARO: But the man considered the godfather of micro-lending disagrees vehemently.Muhammad Yunus, who won a Nobel Prize for his work with Bangladesh’s Grameen Bank, lashed out in a recent New York Times op-ed. “Commercialization,” he wrote, “has been a terrible wrong turn for microfinance. Poverty should be eradicated, not seen as a money-making opportunity.”

VIJAY MAHAJAN:Yes, this is a difference of opinion I have with Professor Yunus.

FRED DE SAM LAZARO:The debate over commercialization isn’t an academic one. It’s had real consequences in the countryside, where people can’t pay back their loans. Pula Polepaka, a mother of two small children, stayed current for three years with four loans. But she missed three weekly installments after her husband, Prakash, who had adequate income as a house painter, got sick. The collection boys, as she calls them, began to hound them.

PULA POLEPAKA, India (through translator):We left for another village where we have relatives, but the collection boys tracked us down in that village, and we were humiliated. He didn’t say anything about committing suicide. He just went far away and took his life.

FRED DE SAM LAZARO:Her husband’s suicide and those of dozens of other borrowers got the attention of the media, politicians and government regulators, like Subramanyam Reddy.

FRED DE SAM LAZARO:Last October, an ordinance written by Reddy was approved by the state’s legislature. It mandated credit checks, monthly instead of weekly payments, an end to aggressive collection practices, and fuller disclosure of interest rates, which Reddy says averaged 35 percent.

SUBRAMANYAM REDDY:So, there has to be a lot of disclosure. That’s the first fundamental thing. They employ a number of unlawful elements to do their recovery.

FRED DE SAM LAZARO:Meanwhile, opposition political leaders upped the ante, saying the government ordinance didn’t go far enough. They urged borrowers to stop making loan payments altogether. Repayment rates plummeted, and banks stopped lending to microfinance companies. BASIX’s founder, Vijay Mahajan, defends many of the current practices. He says weekly collections make sense, since that’s how people get paid. As for high interest rates, he says microlenders have to pay a lot to get money from banks to make their loans, and they incur high costs going door to door to collect payments. He thinks regulation has imperiled a critical source of credit for the poor.

VIJAY MAHAJAN:Instead of going after a few incidents where, you know, extreme overlending had been done, or going after one or two institutions which had systematically engaged in such practices, the entire sector was converted into a demon.

ROSHANEH ZAFAR, microfinance lender: If you are talking about numbers games, then we are going to end up in a pit — in a sort of pitfall, where we end up creating over-indebted clients, which is one of the reasons that this has happened in Andhra Pradesh. We have grown too fast. And we have added too many — we have pushed credit on the same client, and therefore, they have defaulted.

FRED DE SAM LAZARO:But she says the answer is not necessarily to do away with commercial lending to the poor.

ROSHANEH ZAFAR:If you’re not there in the long run, and you’re saying to the client, you know, I’m here to help alleviate poverty, and you’re not there in the long run, then you’re not doing what you’re supposed to do. And you are not keeping to your mission and your vision, because poverty is not going to change in three years. It’s going to change in a decade or more. So, you really have to be a viable entity who has to be resource — you know, who has to manage their resources well.

VIJAY MAHAJAN:The lesson is you can make profits, and society will support you. They might even, actually, respect you for it. But if you are seen to make excessive profits, if you are seen to being profiteering or being — you know, personally enriching yourself beyond what is considered reasonable — and that varies from location to location — then society will revile you.

FRED DE SAM LAZARO:After negotiations, banks have begun loaning to microfinance companies again, and the government is urging borrowers to resume paying off their loans. There will be no loan forgiveness, but the government also wants the companies to give its borrowers more time to become debt-free.

JIM LEHRER:Since Fred finished that report, the Bangladesh government removed Muhammad Yunus as head of the Grameen Bank. A court there will hear Yunus’ appeal next week. And on Friday, India implements new regulations governing microloans. Fred’s reporting, as always, is a partnership with the Under-Told Stories Project at Saint Mary’s University in Minnesota.

discussion questions
see more educational resources here
Over the past decade, new commercial companies have handed out $7 billion worth of loans. 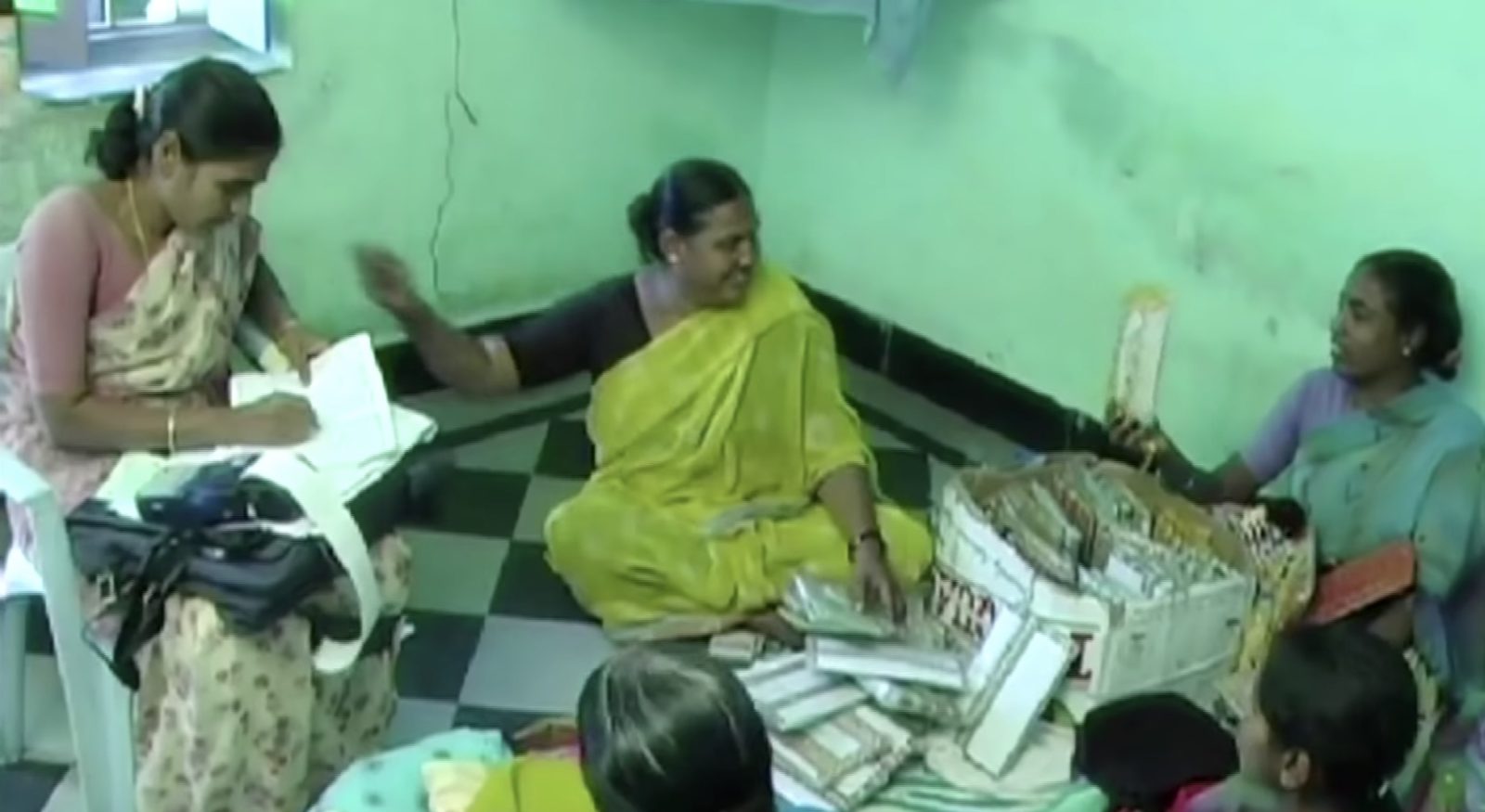 Microlenders have to pay a lot to get money from banks to make their loans, and they incur high costs going door to door to collect payments.

Pula Polepaka, a mother of two small children, stayed current for three years with four loans.
But she missed three weekly installments after her husband, Prakash, who had adequate income as a house painter, got sick.

We left for another village where we have relatives, but the collection boys tracked us down in that village, and we were humiliated. He didn’t say anything about committing suicide. He just went far away and took his life.