The West African nation that is making progress in ethical leadership, an inclusive economy and a vibrant, free press.
Play Story
Subscribe to Stories

MAN: This is your show, the “UNIIQ Breakfast Drive.”

FRED DE SAM LAZARO: Radio reaches nearly all of Ghana’s 23 million people, and lively give-and-take is a breakfast staple. Tempers flared and guests from different political factions jumped all over each other’s words, but, once the show was over, all was quickly forgiven.
It’s a scene that sharply contrasts with the civil wars and bloodshed in many of Ghana’s West African neighbors. In a continent where long- running dictatorships are the norm, Ghana has enjoyed two decades of thriving democracy. Two incumbent leaders have lost in general elections. In 2008, the margin was less than 1 percent. Yet, on both occasions, the sitting president stepped aside and power was transferred peacefully.
Ghana was the first African colony to gain independence back in 1957 from Britain. It had its share of autocrats and military coups, until the early ’90s, when long-ruling strongman Jerry Rawlings, seen here with President Clinton, stepped aside and allowed democratic elections.
That marked a turning point, says political scientist Emmanuel Gyimah-Boadi.

EMMANUEL GYIMAH-BOADI, political scientist: It’s the first time we have had both economic growth and political stability and freedom. In many ways, the economy has been improving and improving since the early ’90s, and seems to have begun to gallop a bit for the past six years or so.

FRED DE SAM LAZARO: A U.S.-based drilling company discovered major oil reserves in 2007, and Ghana’s first oil revenues began to flow last December.
The hope is that Ghana can avoid the fate of other African oil nations, which have squandered their wealth through mismanagement and corruption, leaving their populations poorer than ever.

PATRICK AWUAH, Ashesi University: Ghana has been very fortunate to have discovered oil after democracy, and not before, because that democracy is going to influence how that — you know, how Ghana manages its oil wealth.

FRED DE SAM LAZARO: Patrick Awuah is one of a growing number of overseas Ghanaians who have returned. He went to college in the U.S., then worked at Microsoft. He came back to start a university called Ashesi, or “Beginning.” Ghana’s fledgling democracy needs leaders, he says.

PATRICK AWUAH: We have borrowed the liberal arts, the model of the liberal arts and sciences, as the way to do that, that teaches broad perspectives, a deep ethos, a deep concern for ethics, and a specialization.

FRED DE SAM LAZARO: Ashesi has 450 students and will soon triple that number in a new campus just outside the capital, Accra, with funds from the World Bank and other investors. Students and alumni we talked to echoed the school’s values.
Business major Naa Ayeleysa Quaynor-Mettle hopes they will make a difference.

NAA AYELEYSA QUAYNOR-METTLE, university student: Because you’re training ethical leaders, entrepreneurs, who are going to take over in terms of the integrity, in terms of sharing the national cake or the national pie among everybody, so that the majority of the nationals, the Ghanaian nationals are not eating the drops or the crumbs from the table, but then we’re sharing equally.

FRED DE SAM LAZARO: Right now, Ghanaian are hardly sharing equally. Although Ghana is better-off than it’s West Africa neighbors, there’s a wide gap between urban and rural areas.
The vast majority of Ghanaians and much of this country’s poverty reside in the rural hinterland. And most experts say that the only way to really attack poverty has nothing to do with gold, diamonds, or even oil, but rather to create more economic activity and more jobs in rural communities like these.
One example is in shea nuts. They are exported to Europe and America to be processed into shea butter, for skin creams or food additives. There’s a move to start doing more of the lucrative processing right here. In the northern Tamale region, Rita Dampson co-owns one of a growing number of small local processors. They are supported by aid groups, companies that use social awareness in their marketing, and also a U.S. aid project set off by Congress to boost trade with Africa.

RITA DAMPSON, business owner: When you pick the nuts and sell, that’s just the end of it. But when you process it into butter, the profits you can get to support your children, by paying their school fees.

FRED DE SAM LAZARO: So there’s more profit if you process the nuts?

FRED DE SAM LAZARO: Hundreds of women today sort and clean the shea nuts, and once they’re crushed, spend hours as human mix masters, knead the viscous dough to release the prized shea butter.
A few businesses have also started using mechanized plants to increase production, but the shift to local processing has a long way to go. The vast majority of shea nuts are still exported.
Local processing is even more difficult with what is still Ghana’s biggest export: cocoa beans. Very little chocolate is made anywhere in Africa because of a lack of refrigeration and milk. So the emphasis here is instead on getting a better price. Kojo Adojeno Tano and his neighbors belong to Kuapa Kokoo, Ghana’s largest cooperative. It was set up 20 years ago with the help of a British aid group called Twin Trading. It, an American group called Fair Trade USA, the Body Shop, and others have helped find buyers who have pledged to pay fair trade prices.
The co-op even owns part of a Fair Trade chocolate line called Divine, sold mostly in Europe and online in the U.S. Kuapa Kokoo members help each other with chores, cutting open cocoa pods, fermenting and drying the beans inside them. Nationwide, the co-op has 64,000 members and is itself a democracy. Members elect their national leaders, as well as local recorders, usually a trusted elder.
In this group, it’s this Kojo Tano.

FRED DE SAM LAZARO: Meticulous accounts are disclosed at group meetings. The co-op’s profits have paid for community wells, credit unions and schools. It’s hardly made anyone rich. Few people here have even tasted chocolate, for example.
Fifty-four-year-old Tano is an exception.
How old were you when you first tasted chocolate?

FRED DE SAM LAZARO: But he’s much more interested in how much Fair Trade chocolate is consumed in Europe and America.

MAN: We need more money from you.

FRED DE SAM LAZARO: For now, Fair Trade doesn’t have a fair share of the chocolate market. Kuapa accounts for just 5 percent of Ghana’s cocoa farmers. Still, it has improved life for Kojo Tano, whose six children are all getting an education. Two are in college.
MAN: When I grow old, they will look after me.

NAA AYELEYSA QUAYNOR-METTLE: This is the best time to be a young person in Ghana.

FRED DE SAM LAZARO: The optimism is echoed back in the capital, especially among young urbanites, like the business major Naa Mettle.

NAA AYELEYSA QUAYNOR-METTLE: With the oil find, Vodafone is just coming to settle. There is KPMG. There’s Pricewaterhouse. There are all the giant, more international companies coming in. I think those opportunities are just overthrowing.

FRED DE SAM LAZARO: From big oil to small shea nuts and cocoa beans, Ghana’s challenge will be to make the benefits flow more evenly, especially to its rural areas and, at the same time, keep its commitment to democracy and free media.

MAN: The Ghana National Petroleum Corporation has, for the second time, lifted a total of 994,691 barrels of Jubilee crude oil.

FRED DE SAM LAZARO: For now, oil revenues are meticulously reported. How all the new money will be monitored will be central to the political debate that will only heat up as elections approach next year.

In a continent where long- running dictatorships are the norm, Ghana has enjoyed two decades of thriving democracy. Two incumbent leaders have lost in general elections. In 2008, the margin was less than 1 percent. Yet, on both occasions, the sitting president stepped aside and power was transferred peacefully. 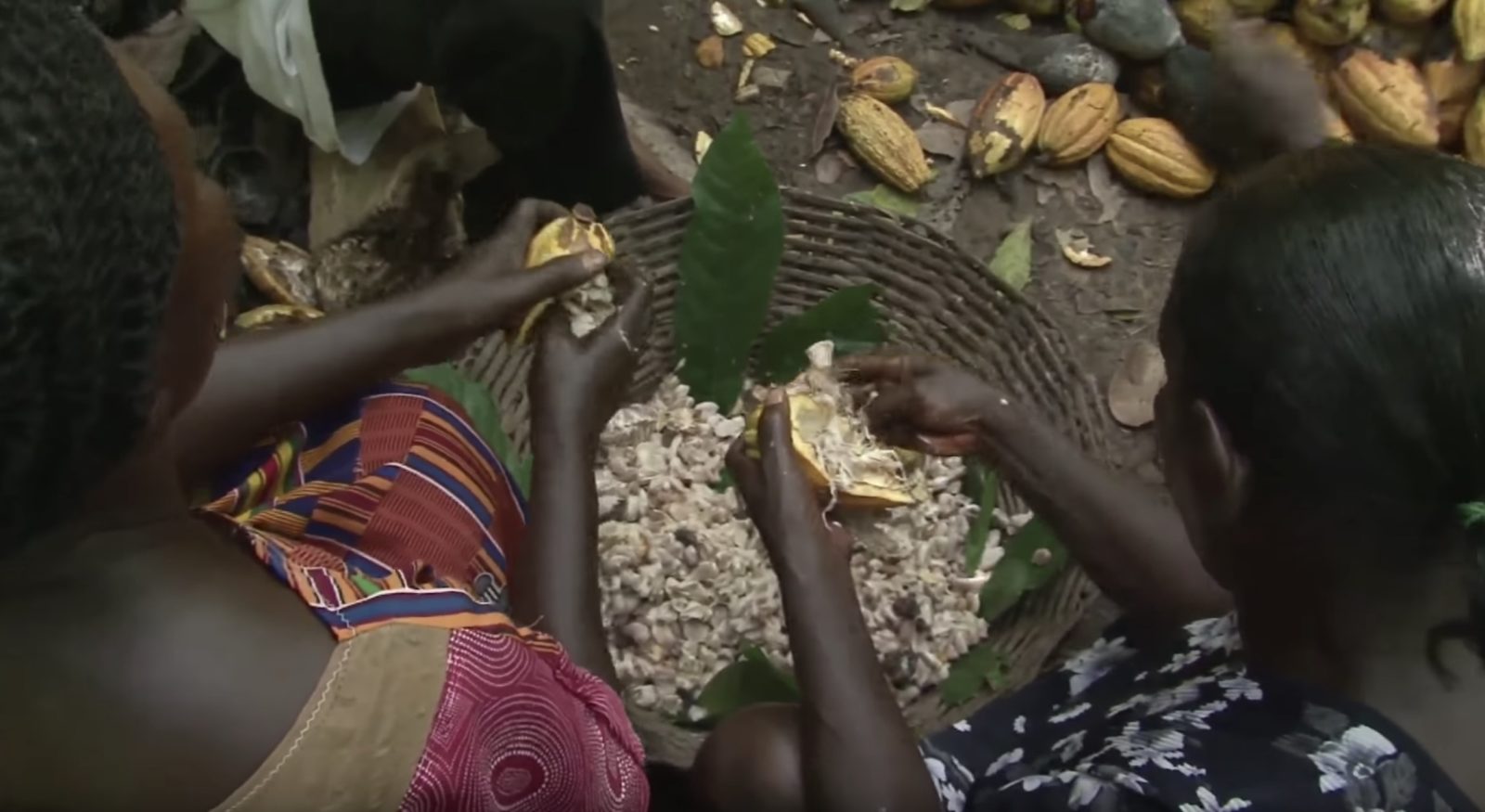 Kuapa Kokoo members help each other with chores, cutting open cocoa pods, fermenting and drying the beans inside them.

Nationwide, the Ghana’s largest co-op has 64,000 members and is itself a democracy. Members elect their national leaders, as well as local recorders, usually a trusted elder.

“Ghana has been very fortunate to have discovered oil after democracy, and not before, because that democracy is going to influence how that — you know, how Ghana manages its oil wealth.”