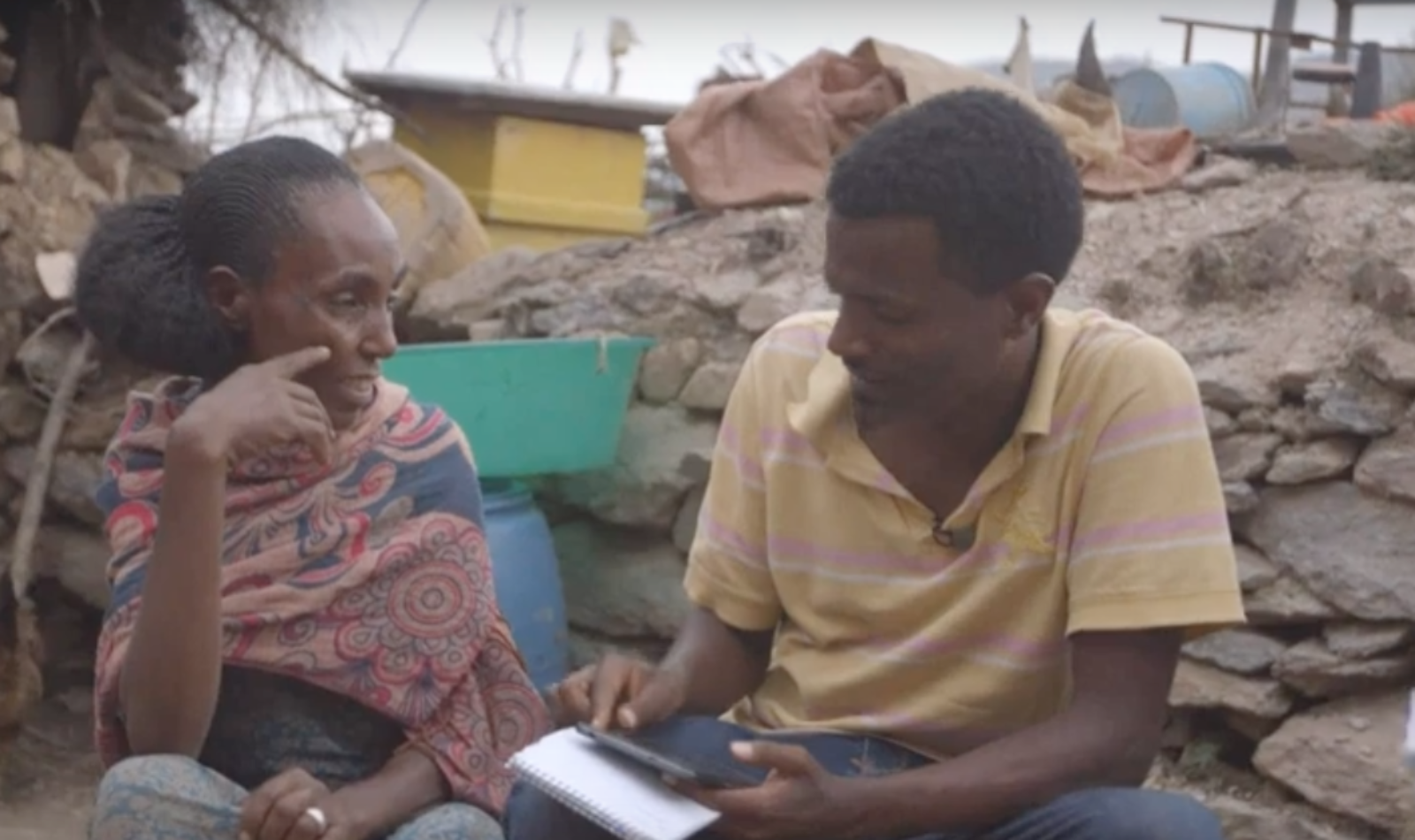 Judy Woodruff:The foreign aid dispensed every year by the U.S. amounts to about 1 percent of the total federal budget, but that tiny percentage is often a giant political target.In recent weeks, some in the Trump White House tried again to stop some foreign aid funding, before the president stopped the effort. The criticism? It’s a waste of money and doesn’t work.But, in Ethiopia, some economists recently sought to test different anti-poverty programs.And, as Fred de Sam Lazaro reports, finding out what works makes it easier to find out how to help.Tedros Kesete and Taame Tesfaye have a daunting job, tracking down hundreds of the poorest people in Ethiopia. They’re looking for specific individuals who took part in an anti-poverty program more than five years ago, all this in an area with few street addresses and even fewer street signs.

Tedros Kesete:When you walk around two hours, and you didn’t get the household, the head, you feel so angry at that time.

Fred De Sam Lazaro:Around the world, one in 10 people gets by on less than $2 a day. In Ethiopia, it’s more than one in four.And due to the changing climate’s impact on agriculture, subsistence is only getting harder for most people. Polls in the developed world show broad support for anti-poverty aid. But there’s one major obstacle, according to development expert Rachel Glennerster.

Rachel Glennerster:A big concern that people have is, I would like to support the ultra-poor if I knew that there was something that I could do.And I think most people’s suspicion is, oh, aid is wasted or aid is not effective.

Fred De Sam Lazaro:For decades, there was little evidence either way on the effectiveness on anti-poverty programs. Almost no one was studying the impact, especially long-term impact, of the various approaches to humanitarian aid.Economist Dean Karlan got his start working for a micro-credit program in Latin America.

Dean Karlan:I was really struck by how little they knew about whether they were generating an impact. Should they add training to what they were doing? Should they be lending at this interest rate or that interest rate?And there really was just nothing resembling evidence and data that was being used to inform these kinds of decisions.

Fred De Sam Lazaro:So in 2002, Dean Karlan founded Innovations for Poverty Action, a nonprofit organization that applies rigorous research methods to anti-poverty aid.In Ethiopia, Tedros is part of the team helping experts like Karlan understand which programs actually help the poor.Half of the villagers Tedros is tracking down received an anti-poverty aid package seven years ago. The other half didn’t.You draw the analogy in your approach to what happens in medical trials. Explain that to me.

Dean Karlan:If you want to know whether a certain pill works, you can’t just have a bunch of people who have a problem, give them the pill, and see if they get better, because there’s lots of reasons why ailments go away or get worse, and things like that. And so you have to have a placebo group.

Fred De Sam Lazaro:Five hundred villagers were randomly assigned to the treatment group, and another 500 to the control group.Tedros and his colleagues assessed both groups’ well-being at the outset, then at one, three, and now seven years later. The question is, did those who received help do better, and, if so, how much better and for how long?

Rachel Glennerster:At the most fundamental level, the ultra-poor program and the research around it is asking, can you take people who are in the very worst situations, and put them on a different path in life?

Fred De Sam Lazaro:This was a multipronged intervention. Each household received four different kinds of help over two years.They got to choose a productive asset, valued at 360 U.S. dollars. Most chose goats, for milk and for more goats. Some chose oxen. Still others chose bees. They were encouraged to save money at a community bank, with no withdrawals permitted until their balance equaled the value of the assets they’d been given.They received staple foods, valued at $8 U.S. per month, to help get through the lean season and grow their new business. In Ethiopia, the control group also received this aid.Finally, the treatment households received weekly visits over two years, training them to manage and market their asset and coaching them on general life skills and confidence.I asked Karlan if it was important to do all these things at once.

Dean Karlan:The idea is maybe if you provide some money to somebody to start a business, but no training in how to run that business, then it doesn’t work so well.And so the answer is, no, no, no, do both.

Fred De Sam Lazaro:So a lot of factors cause a person or a family to be in poverty, and, likewise, to attack the poverty, you need to have a multipronged approach.

Fred De Sam Lazaro:Not everyone is eager to help Tedros collect data on Karlan’s experiment, particularly the control group, which received no assets.

Tedros Kesete:You interviewed yearly, but you didn’t give anything until now. They said like that.But the goal is to collect pure, accurate and clean data. And I think I do it.

Fred De Sam Lazaro:The data collected by Tedros and dozens of his colleagues is transmitted back to Innovations for Poverty Action, which partners with Yale University and Northwestern University.That’s where Dean Karlan’s team of academic economists takes the baton. Their work must be equally painstaking.This data analysis is complicated. And you had some families in the control group, or you had all the families in your control group that didn’t get any assets. Many of them did very well.What is that telling you?

Dean Karlan:We can take any story, one data point, and then we can tell a story from it. Find one household that was ultra-poor beforehand and got this program and now is doing much better.Suppose, instead, you wanted to tell a story about aid being horrible and aid being wasted. Well, we can find a household that was doing really, really badly beforehand, in extreme poverty, got this program, didn’t work.

Fred De Sam Lazaro:So a lot of the marketing, if you will, or the accountability has come in the form of anecdotal information, as opposed to methodical study.

Dean Karlan:So there’s always going to be data points you could pull to tell whatever story you want. And the answer comes from looking in aggregate at the data and looking at the patterns.

Fred De Sam Lazaro:And once Karlan’s team finished crunching the numbers, a clear pattern emerged. One year after the program concluded, there were significant gains in all major measures, revenues, savings, food consumption, and total assets.And policy-makers are listening. Encouraged by the graduation program’s results to date, the Ethiopian government has already scaled the project from 500 households to 8,000, according to Mulugeta Berhanu, a longtime aid officer in Ethiopia.

Mulugeta Berhanu:They have the plan to increase this to 150,000 households in the coming five years. So, research, they have really great impact in convincing policy-makers.

Fred De Sam Lazaro:It’s not just Ethiopia. The program’s multipronged attack on extreme poverty has been tested in a six-country study. It proved beneficial and cost-effective in Ghana, India, Pakistan, and Peru, but not in Honduras, where disease wiped out the chickens that most families chose us their asset.

Rachel Glennerster:The evidence is really quite strong that this approach of combining a package of different interventions to help the ultra-poor is very successful. It’s been successful in a range of different countries and over a long term.It tells us that people who are really poor can have a radical change in their life.

Tedros Kesete:When you see, like, these things, you feel happy. You love what are working, and you feel glad what you are doing.

Judy Woodruff:Fred’s reporting is in partnership with the Under-Told Stories Project at University of St. Thomas in Minnesota.

The topic of foreign aid can be a divisive issue. One non-profit is trying to bridge the gap with researching what works, how well and for how long.

“There really was just nothing resembling evidence and data that was being used to inform these kinds of decisions.”