FRED DE SAM LAZARO: It was an unusual sight at Mass last Sunday [January 9] in the dusty regional capital of Bentiu. There were empty seats. But Father Samuel Akoch didn’t seem to mind, because this was an improbable historic day in Southern Sudan. Most of the absentees were around the corner, lining up for the chance to vote for secession, to create their own nation

REV. SAMUEL AKOCH (Saint Martin de Porres Catholic Church): I know that each of you came here to pray. I also know that each one of us is carrying our voting card in our pocket.

DE SAM LAZARO: And as the service concluded, it took on the fever of a campaign rally. Those voting cards came out and Father Samuel led a bee-line to the polling center, joining hundreds already there. Their ballot choice was as simple as the set-up of this polling center under a tree: Stay as one Sudan or separate into a new republic of South Sudan. That was the overwhelming favorite here. Father Samuel imagined that nation.

REV. AKOCH: People will be free to express their own religion, they will use their resources without anybody telling them no, so it is really great help for us to see this day. It was many people have died and they never saw this.

DE SAM LAZARO: The predominantly Christian and traditionalist black African Southern Sudan has seen almost nonstop war with the Arabic-speaking and Muslim North since the country’s independence from Britain in 1956. Two million people are thought to have died in recent years in the battered South, an impoverished land even though rich oil reserves were discovered here in the 1980s. A few feet under this fading sign is a pipeline that conveys crude oil from here in the South north to the port of Port Sudan. It’s a metaphor for the South’s complaint. The pipeline, like the oil wealth, they say, is invisible here in the South.

Oil added a new intensity to the conflict in the ’90s, a period which also saw the rise of the Islamist regime of Omar al Bashir. He’s since been indicted by the International Criminal Court for his role in the Darfur conflict in Western Sudan. But it’s the enduring North-South war that got the attention of evangelical Protestants in America. They saw it as a religious conflict.

REBECCA HAMILTON (Journalist and Author): The evangelical community has been pivotal in the battle of Southern Sudan for its freedom, and they framed the war with the North as a battle for religious freedom, and in many ways that was true…

HAMILTON: Religious freedom for Christians in the South. In many ways it was true, because the Northern government was trying to Islamize the South, but it was also a very useful framing of the conflict for getting the attention of key members of the United States Congress.

JOHN ASHWORTH (Catholic Relief Services): I think in the United States you had the coming together of the right-wing evangelicals, the [Congressional] Black Caucus, and the liberal human rights organizations. There’s probably no other situation in the world where those three groups would have common ground. But I think we also have to say that 9/11 played a role in bringing about the CPA [Comprehensive Peace Agreement]. On 9/11, the United States woke up to the reality that things happening in far-away countries had direct implications for the United States, and from that point we saw a much greater engagement with Sudan-Sudan, of course, having a history of being involved with so-called terrorist movements.

DE SAM LAZARO: Finally, in 2005 an American-brokered peace agreement was reached which called for this week’s referendum and also a sharing of oil revenues. At this church building-destroyed by fighting in the 1980s and now, ironically, a polling center-voters expressed hope that their sad history of slavery and exploitation would soon end.

KAFI ABUSALLAH: We have been mistreated by the Khartoum government, and we will show them that we want to stand firmly alone.

PETER PAL: The Northerners have made us their slaves for a long time, and we are ready to show them that we can lead ourselves. We are looking for good hospitals, good schools, good roads.

MARY DOAR: Our resources have never benefited us. Now we will get the benefit of our own resources.

DE SAM LAZARO: Managing voter expectations will be only one of several daunting tasks for the government of a new South Sudan. Keeping the peace is another immediate priority-not just with the North but within the South.

HAMILTON: South Sudan is itself a hugely divided community, and we haven’t seen for years because it’s been the greater enemy in the North, but I think once that enemy of the North is gone we will see all sorts of ethnic tensions rising inside the South.

DE SAM LAZARO: The Southern churches-Catholic, Presbyterian, Anglican, and others-have held ecumenical services for a peaceful referendum and will play a pivotal role in reconciling the South’s ethnic groups, whose rivalry stems mostly from land, water, and grazing rights for cattle. It’s a familiar role.

ASHWORTH: During the decades of war there was no infrastructure in the South except the church. There was no government, there were no NGOs, no UN, no civil society, and even the traditional leadership of chiefs and elders had been eroded by the coming of the young men with the guns. The church is the only institution which remained here with its infrastructure intact. It remained on the ground with the people. Now because of that we gained huge moral authority.

post05-sudanDE SAM LAZARO: Another key figure is former president Jimmy Carter. With Rosalynn Carter he’s been observing the polls and met with leaders from both North and South. On both sides the former president said he’d received assurances that religious minorities would be protected.

JIMMY CARTER: I met extensively with President Salva Kiir, and he assured me, first of all, that there would be absolutely no restraint on religious freedom in the South, that everybody, Islamic or Christian or Buddhist or whatever, would be free to worship as they chose. In the North, of course, they had had sharia law for many years, and there has been some accommodation for people of other faiths, Christians and others. President Bashir assured me this week that the same guarantees of the rights of other people to worship in different ways would be preserved, and they would not be harassed. He promised me personally that they would protect the churches and other things and protect the right of people to worship as they choose.

DE SAM LAZARO: There remain sensitive issues that could inflame tensions or worse: drawing borders, deciding on the rights of Southerners living in the North and vice versa, and a critical permanent oil-sharing revenue agreement still needs to be negotiated.

The new South Sudan, should that nation emerge, will be one of the poorest on earth. Paved roads, hospitals, and schools are virtually nonexistent, and the peace remains precarious. But all those worries have been cast aside by the euphoria of this moment-the chance, these people say, for the first time in their history for first-class citizenship.

For Religion & Ethics NewsWeekly, this is Fred de Sam Lazaro in Bentiu, Sudan.

A Referendum for Independence

During decades of civil war in Sudan, says John Ashworth of Catholic Relief Services, the church was the only institution on the ground with the people, and because of that it gained huge moral authority. Now South Sudan is voting in a referendum for independence from the Muslim-majority national government in Khartoum. 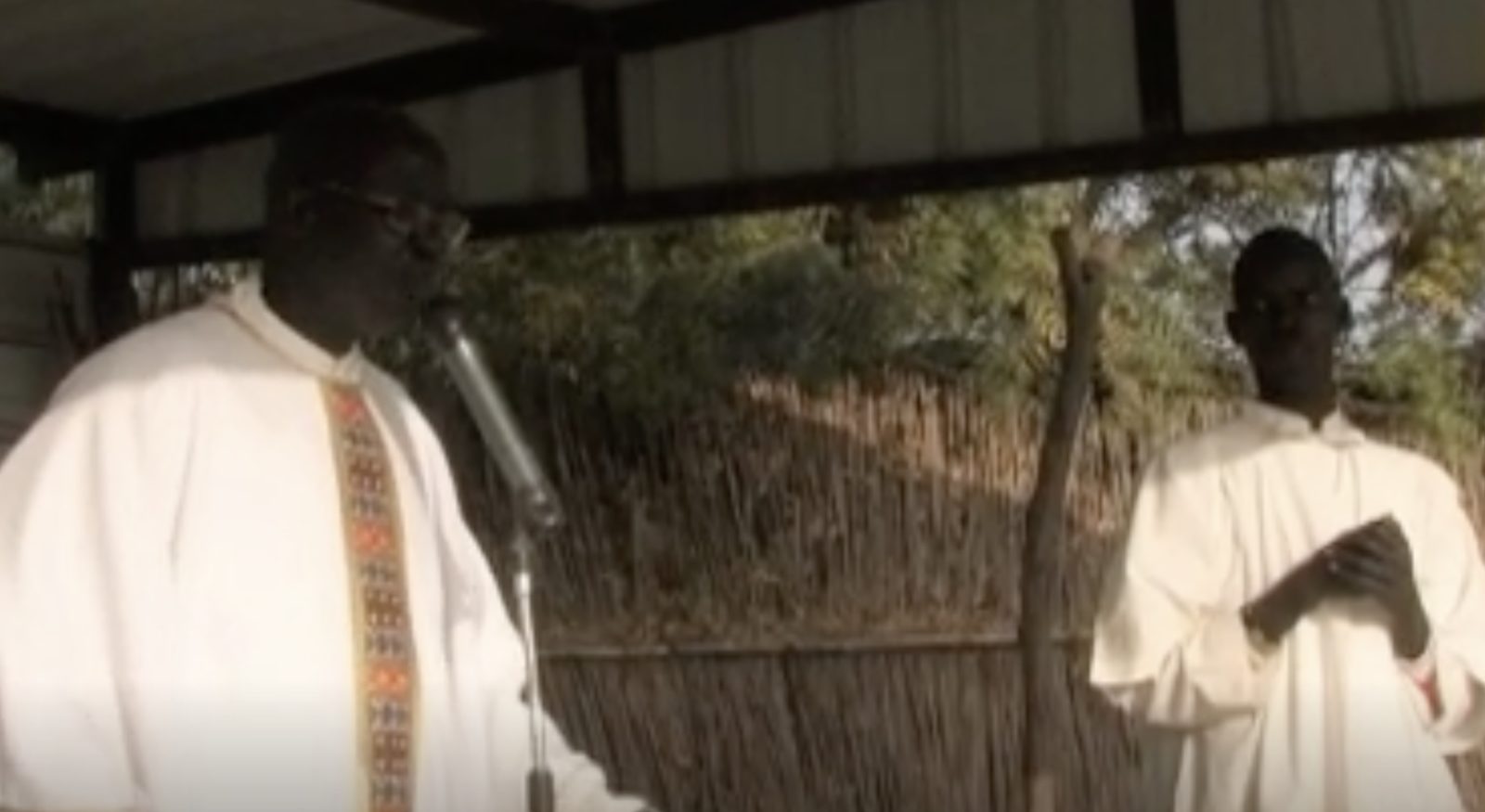 Since the country’s independence from Britain in 1956,
the predominantly Christian and traditionalist black African Southern Sudan has seen almost nonstop war with the Arabic-speaking and Muslim North.

The new South Sudan, should that nation emerge, will be one of the poorest on earth.

Paved roads, hospitals, and schools are virtually nonexistent, and the peace remains precarious.

But all those worries have been cast aside by the euphoria of this moment-the chance, these people say, for the first time in their history for first-class citizenship.