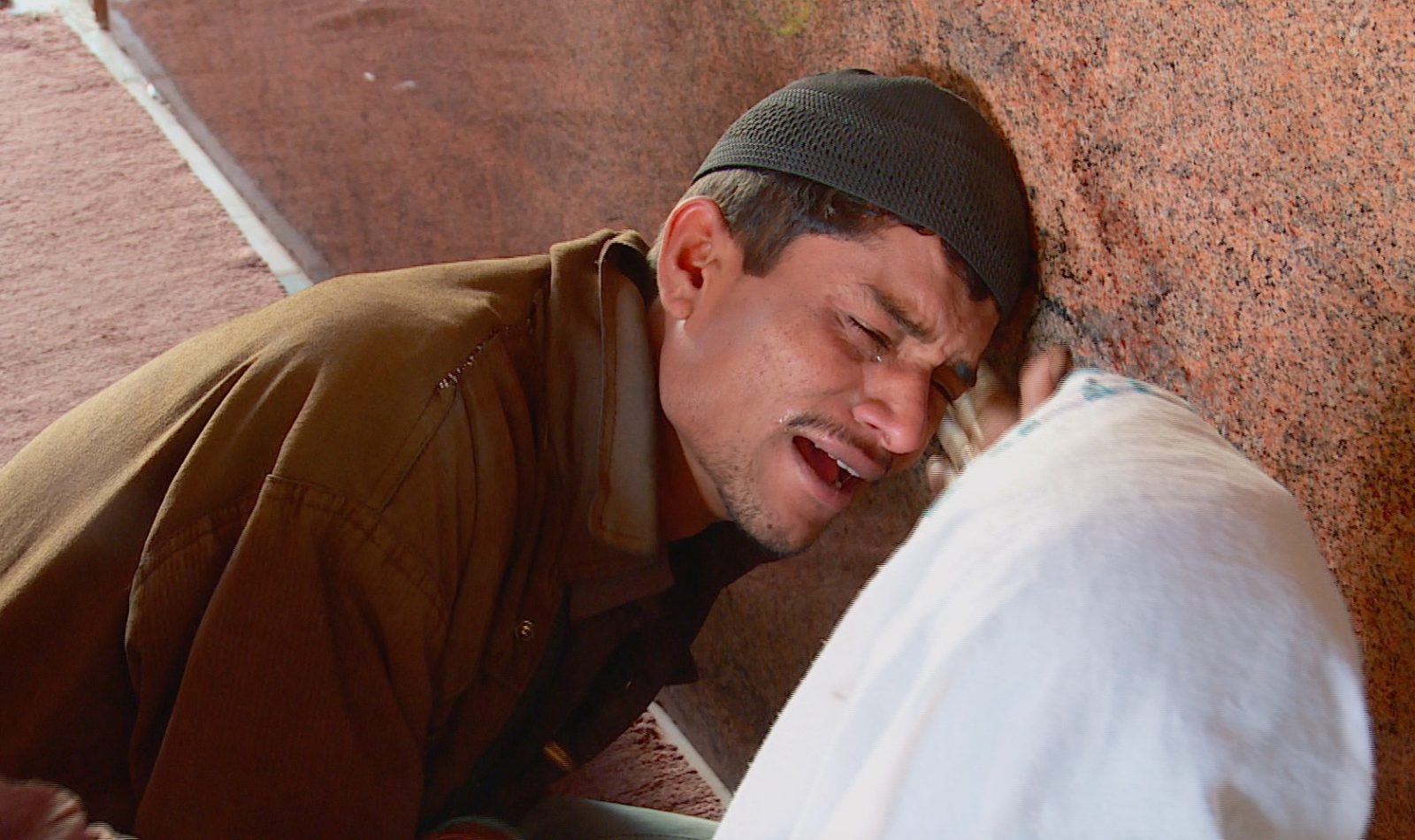 Thousands of faithful-not just Muslims but also Hindus, Christians, Sikhs and others from across India-come here each day to pray for a blessing or a miracle: couples unable to conceive, people suffering from various maladies. It’s also the closest thing for many Indians to a mental health facility.

It is a taboo subject, the stigma especially hard on families of people with mental illness. Treated as a curse, a demonic possession or karma for misdeeds in a past life. Sayyad Varis Ali is a managing trustee of this shrine.

SAYYAD VARIS ALI: The people who come here with mental illness, they have tried everything else and they have not gotten any relief. And finally this is the place that they come to, they come here to pray.

DE SAM LAZARO: At this shrine dozens of faith healers called “kadims” recite prayers while patients perform rituals: breathing in smoke from incense burned at the tomb, walking around this dome seven times.

The numbers in India are simply staggering. There are thought to be about one hundred million people with common mental disorders and up to twenty million with severe mental illnesses such as schizophrenia. For all of them, there are just five thousand psychiatrists in this country. So faith healers from across India’s diverse religious mosaic have long filled the gap, says Milesh Hamlai, a well-known mental health advocate.

MILESH HAMLAI: Access to care is not there, lack of professionals, lack of medication, lack of awareness, lack of knowledge so all this leads to only one thing that you go to the easiest and the most available source of help. I come from an urban India so in spite of that my family took my brother first to such kind of places.

DE SAM LAZARO: Hamlai, who comes from an educated middle class background, became an advocate after his brother came down with schizophrenia several years ago. He discovered there are some resources, provided by regional government hospitals. But they aren’t well known or utilized in a historically inefficient system. So Hamlai brought state mental health officials led by Dr. Ajay Chauhan to the shrine.

India-Mental-Health-post02DR. AJAY CHAUHAN: When I came here there were forty to fifty faith healers standing in the door to keep us from entering. They thought doctors were coming to put them out of business. It was a very sensitive time, especially since this is a Muslim holy place, and there are several thousand jobs at stake.

DE SAM LAZARO: Eventually, perhaps with the implied threat of legal action, they were able to enter, but Dr. Chauhan says they reassured the shrine’s leaders they had no intention of shutting it down. He says conditions they saw though were appalling.

CHAUHAN: There were forty, fifty people chained up to a post, often because they’ve had violent episodes, some were abandoned by their families. Conditions were also very unhygienic and completely inhumane.

DE SAM LAZARO: Things have improved markedly. India’s supreme court outlawed mechanical restraints. Chains are used now but only symbolically and not as restraints. And under a partnership brokered by Hamlai, the shrine allowed psychiatrists to set up clinics inside and just outside the premises. They also began to train faith healers to look for tell tale signs of common mental illness. Kadims like Syedumia Mehmood Ali see such symptoms, like those of 23 year old Javed, through a very different therapeutic lens.

SYEDUMIA MEHMOOD ALI: Somebody has performed black magic on him. I can tell from the way he is, sulking and down.

DE SAM LAZARO: But after a session of ritual and prayer, Ali brought his patient to see his psychiatrist tag team partner Dr. Yathin Bhushan.

India-Mental-Health-post03ALI (to DR. YATHIN BHUSHAN): He says he’s been having physical problems, so I thought I’d bring him to see you.

DE SAM LAZARO: Javed complained of leg pain, but as the conversation went on, there was a longer litany.

JAVED (to BHUSHAN): I don’t sleep because Vikas comes.

BHUSHAN: Who is Vikas?

JAVED: A man. He says come with me…every day.

DE SAM LAZARO: After clarifying with his parents that there was no real threat to Javed, Dr. Bushan renewed a prescription for the anti schizophrenia drugs. Javed’s mother, Saira Banu, said his condition had improved after he began taking them.

SAIRA BANU: He sleeps now. He never used to sleep through the night. Before he used to hit us but now he’s stopped doing that.

BHUSHAN: I’m going to give you fifteen days’ medicine. See me again after fifteen days or if you have any problems. And also do what the kadim says.

DE SAM LAZARO: Psychiatrist Bhushan is careful to acknowledge his faith-based partner. Pills for example are routinely blessed over the shrine’s inner sanctum. Dr. Bhushan says this reaching out is it’s mostly but not always reciprocated.

DR. YATHIN BHUSHAN: Some kadims tell patients that the medicines are not needed…or that they can stop taking them.

BANU: We’ve spent a lot of money and to no benefit.

DE SAM LAZARO: Javed’s parents-laborers from a city about two hours away-struggled for five years with their son’s illness for before finally getting results.

BANU: So everyone was telling us to go to the Mira Datar Dargah where they could treat this problem of black magic so we came here. Then they told us that they had this medicine program as well.

DE SAM LAZARO (to Banu): Is it the medicine or the prayer that’s working?

BANU: Both are working.

DE SAM LAZARO: Milesh Hamlai is not surprised by that kind of response. He says there can be therapeutic value in pilgrimage to the shrine.

HAMLAI: It’s a place to pray, it’s a holy place; they are finding some kind of solace. At least that is trying to bring them back to normalcy and in that if we are able to provide them with medical interventions and proper care, counseling, listening. I’m sure they really feel very good that there is some place where they can go offload themselves.

DE SAM LAZARO: So far Hamlai’s group, called The Altruist, has managed to bring some sixteen thousand patients to the program called Dava Dua-medicine and prayer. It’s a tiny number amid vast need but some experts say a promising prototype to expand psychiatric services without disrupting or antagonizing age old belief systems.

For Religion & Ethics NewsWeekly, this is Fred De Sam Lazaro in Gujarat, India.

It is believed that there are as many as one hundred million people with common mental disorders in India, and up to twenty million with severe mental illnesses such as schizophrenia, but only five thousand psychiatrists in the entire country. Traditional faith healers try to fill in the gap for many, but now the spiritual and medical practitioners are teaming up to better serve their neighbors. 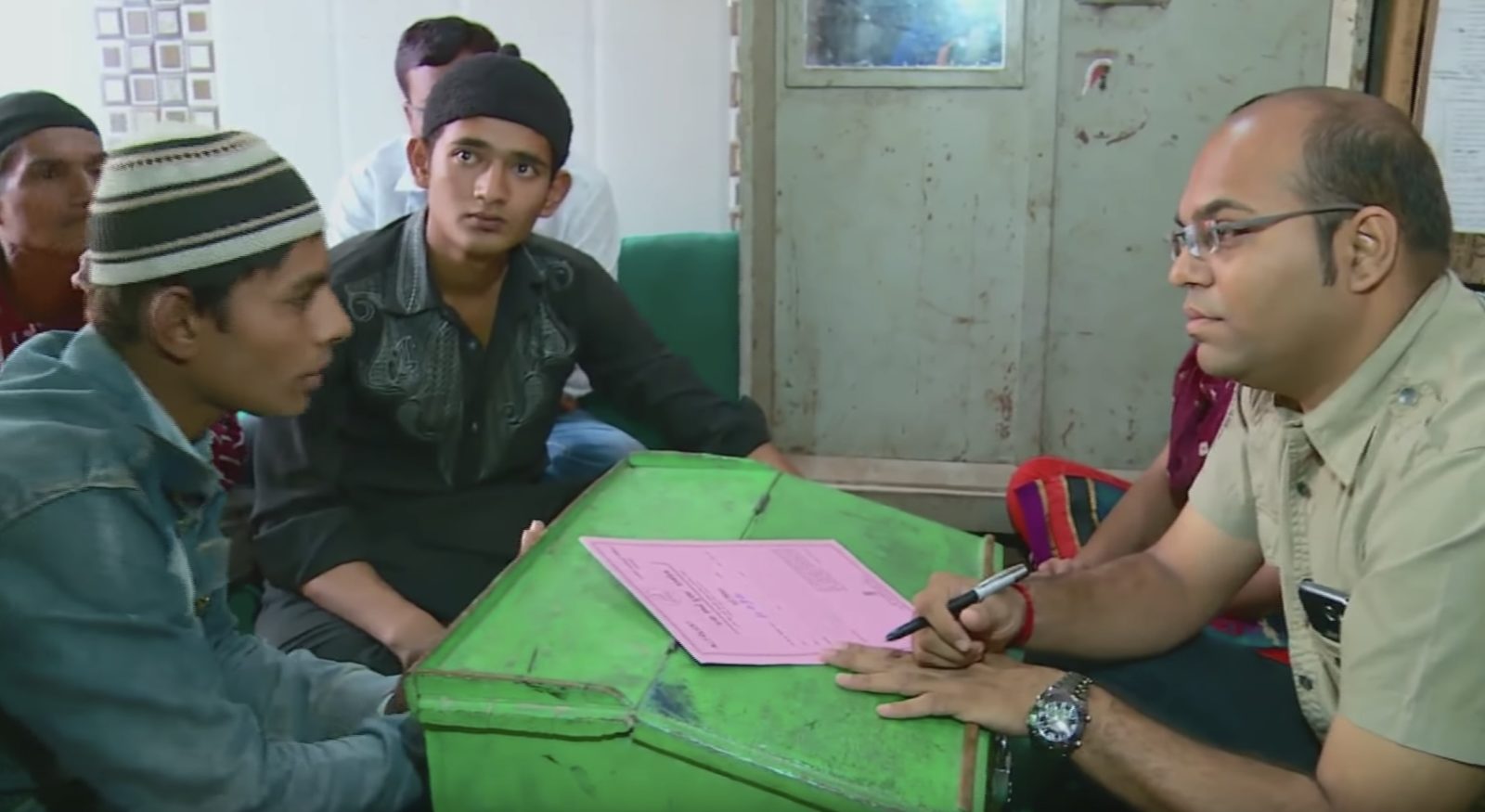 Pills are routinely blessed over the shrine’s inner sanctum.

So far Milesh Hamlai’s group, called The Altruist, has managed to bring some sixteen thousand patients to the program called Dava Dua – medicine and prayer.